I’ll be the first to admit it: I’m a huge fan of Jacques Tati. His two films in the ‘50s – Les vacances de Monsieur Hulot (Mr. Hulot’s Holiday) and Mon Oncle – are comic masterpieces.  And I’ll also be the first to admit that I was hugely disappointed by Playtime. I wasn’t the only one, apparently: This was the film that broke director Jacques Tati. He mortgaged everything to make what he believed to be his masterpiece, and lost it all when the film tanked at the box office. Frankly, I believe it to be a flawed masterpiece, done in by not what it shows, but by what it doesn’t show. 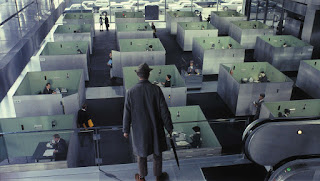 As there is no real story to the film, the plot is simple: Mr. Hulot (Jacques Tati) has an appointment with an American official in Paris. At the same time tourists are arriving at an airport terminal that easily could pass for an office building and are taken in busses for a whirlwind tour of the city. As the tourists gawk at the wonders of modern Paris, Mr. Hulot finds himself lost in the maze of the new, modern Paris. The old, romantic Paris is only glimpsed as reflections in car windows and glass doors.


Meanwhile, Hulot attempts to navigate the city as if he were not a denizen, but rather an explorer; finding himself lost in the maze of office cubicles and enclosed glass waiting rooms, dwarfed by the huge size and scale of the impersonal surroundings while trying to cope with all the accompanying indifferent efficiency with his usual individualism.

The last half of the movie takes place at night at the grand opening of a night club, an almost Chaplinesque scene that opens with the arrival of workmen and waiters sweating the fine details as the first night’s crowd arrives. This paean to modernity begins to self-destruct as every design flaw becomes glaringly apparent through the evening, resulting in spontaneous sort of revolution of fun and laughter amidst the chaos of the shallow dignified facade.

Playtime follows Tati’s earlier films with the absence of close-ups in favor of long and medium shots. It also continues Tati’s theme of the cold and modern versus the warm and friendly older city, done so well in Mon Oncle. And like the earlier films, while Hulot is our most recognizable character, equal emphasis is placed on the supporting cast. In fact, Hulot disappears into the crowd during the second half of the film, and the film itself contains a running gag involving men who look like Hulot, but aren’t.

And that is the problem that ultimately sinks the film. Without Hulot at the center there is no clear connection between the personal and the impersonal. He is our guide, so to speak; our bulwark against the cold impersonal forces that seek to diminish the warmth found in humanity.


In Mr. Hulot’s Holiday, vacationers are so intent on having fun that they fail to do so. (A beautiful running gag in that film is the man whose vacation is always interrupted by calls from his broker.) It is only when Hulot accidentally sets off the shack of fireworks that people come to their senses and realize that the purpose of their visit is to put aside modern life and its accompanying hustle and bustle and just relax.

In Mon Oncle, the difference between Hulot and his sister and brother-in-law couldn’t be made clearer. The relatives live in a cold, impersonal, modern building with all its accoutrements while Hulot occupies a small apartment at the top of an old building in a section of Paris we think of when we imagine the 20s and 30s. (The running gag concerning the apartment is the length of stairs Hulot must ascend to reach his abode.) While sight gags were the dominant element in the earlier films, Playtime features sound effects, such as the many different sounds of people walking in the city. A little more dialogue instead might have worked wonders. When we do get a sight gag, Tati doesn’t disappoint, as with the scene in the cafeteria where the intrusion of the light from a green pharmacy sign has a pronounced unpleasant effect on the customers and their food. But there simply aren’t enough of these gags; between them are minutes and minutes of dreary colorless film where nothing happens. We wait for Mr. Hulot to take center stage and get the film moving, but instead of Hulot we seem to be waiting for Godot.

Hulot is there; his presence meant to link us with the human against the impersonal. But his diminished role and subsequent disappearance during the second half of Playtime robs us in turn of the one person who can mediate our viewing experience and help us reach the point, as in his earlier films, of emotionally interacting with the film instead of merely being a spectator. Our sympathy and empathy with Hulot, so evident in the earlier films, diminishes greatly with Playtime. And takes our enjoyment with it.
Posted by Celluloid club at 10:39 AM