If there could be said to be a psychotronic version of Marilyn Monroe, Mamie Van Doren would fit the bill. Known for her trademark platinum blonde hair, her voluptuous presence made many an unwatchable movie somehow watchable. TCM is screening seven of her films, beginning at 8:00 pm today, and each and every one of them can be found in Michael Weldon’s authoritative The Psychotronic Encyclopedia of Film.

In this great, campy exploitation film from Warner Bros., Mamie and Lori play sisters who are falsely arrested and railroaded onto a cotton farm run by Russell in cahoots with crooked judge Tuttle. 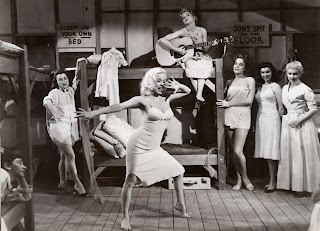 But no matter how hard they’re worked during the day, the inmates always have the time and energy to musically cut loose at night. Yet, does it make any sense that Mamie sings four songs and Eddie Cochran only one? However, this is definitely one to catch – if anything else, for the sheer nonsensical entertainment.

Trivia: The film opened to atrocious reviews and looked as if it was headed for box office oblivion when the Catholic Legion of Decency publically condemned it. That turned its fortunes around as the curious flocked to see what all the fuss was about, and the picture copped a nice profit.

MGM had finally found the youth market thanks to producer Albert Zugsmith, who made the highly-profitable High School Confidential the year before. Van Doren was a huge reason for that film’s success, so it was considered a no-brainer to give her a leading role in this lurid tale of a detective (Cochran) in pursuit of a serial rapist (Danton) known as “the Aspirin Kid.” (Don’t ask.) The rapist is being given shelter by a group of unwitting beatniks, who probably think he’s cool because he can spout philosophy.

Mamie is Georgia Altera, a striking divorcee (what else?) who gets all mixed up with the Aspirin Kid and his beatnik friends. It’s a potentially decent thriller sunk by a dumb script, but it’s bad enough to be entertaining. The amazing cast includes Coogan as Cochran’s partner, McCalla as Coogan’s wife, Maxie Rosenbloom as a beat wrestler, Vampira as a poetess who spouts awful poetry and keeps a pet rat, and Spain as Cochran’s wife and the egotistic Aspirin Kid’s next victim. The film also features Armstrong and his band.

Trivia: Look for Regina Carrol, who later starred in a series of wonderfully trashy films directed by husband Al Adamson, in a small part as a dancer (billed under her real name, Regina Gelfan) . . . Believe it or not, the co-author of the horrid script was none other than noted sci-fi writer Richard Matheson.

Mamie’s a saloon singer who falls for rodeo star Richards. Ohmart is Mamie’s competition. While it’s not bad enough to be a howler, Mamie does get to belt out a couple of tunes. Richard in real life was a former minor league ballplayer before he got into the movies. And look for Galindo, from the great Budd Boetticher/Randolph Scott Western Buchanan Rides Alone, as Papa Gomez.

In this fast-moving heist film Mamie is a Vegas singer drawn into a scheme by husband Van Cleef and his cellmate Mohr to rob an armored car carrying casino revenue. Produced by Edward Small and directed by low-budget specialist Cahn, it’s a diverting 70 minutes in length.

Trivia: Small was sued for plagiarism a couple of years after the picture’s release by writer Art Estrada, who claimed he and co-writer Steve Masino had submitted a script titled “Blueprint for Crime” to Small, who turned it down. The case was settled out of court.

Another campy little gem from producer Small and director Cahn starring Mamie as a prostitute enlisted by syndicate boss Dexter to frame police Sergeant Brandon, who is in the midst of his campaign against vice. But when Mamie’s sister (Nugent) is assaulted by one of the hoods, she and Brandon join forces to take down the syndicate.

Trivia: Working titles for the film were Women Confidential, Pleasure Girl, and The Blonde in 402. The Hollywood Reporter review of the movie refers to it as Vice Squad. 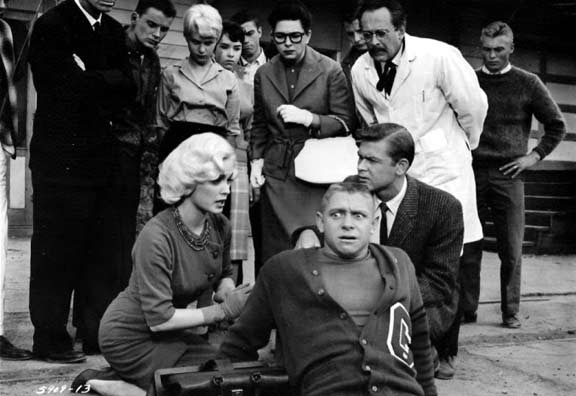 Bad Film Alert: The best thing about this relentlessly unfunny comedy is its great title. Get this plot: Collins College needs a new head for its science department, so Doctors Carter (Mason) and Zorch (Nye) feed all relevant information into their super-computer, Thinko, and it comes up with Dr. Mathilda West (Van Doren). Unfortunately, the brainy Dr. West has secret past: she’s stripper Tassels Montclair. And we’ll leave it at that.

A maniac is on the loose at a Utah resort. He murders, and then mutilates his victims, all voluptuous women. Who is he? Almost everybody at the resort is a suspect because each has skeletons in his or her closet. This is a great sleazeball production, part noir and part exploitation. Besides Mamie there are several other performances to watch: Bancroft, who was making a career for herself in B films and had to go to Broadway to find her niche as a great actress; Windsor, who co-starred in several noir films before this, most notably The Narrow Margin (1952) and The Killing (1956), but she was also in such films as Catwomen of the Moon (1953), and Abbott and Costello Meet the Mummy (1955); and Barker, a former Tarzan noted for being another in the line of men married to Lana Turner and identified by Lana’s daughter Cheryl Crane in her autobiography as the man who molested her as a child. Thus we add a touch of reality.
Posted by Celluloid club at 7:28 AM