A Guide to the Interesting and Unusual on TCM

This is Cinema Inhabituel for the week of October 15-22, where we focus on movies either long forgotten or rarely shown, but interesting . . . always interesting.

I was discussing Cinemoi a few weeks ago and noted the lack of French films at a site supposedly dedicated to French films and culture. I had noted that the only French film shown was The Girl on a Motorcycle, but I erred. The only French things about it were the location filming and actor Alain Delon. But all is not lost. There is an actual French film of sorts listed for the month: Contempt, a Franco-Italian co-production, but directed by Jean-Luc Godard and starring Brigitte Bardot and Michel Piccoli. That’s it, I’m sorry to say. But if you want to see Georgy Girl, Darling, The Collector, or All That Jazz, this is the channel for you. Not there’s there anything wrong with them. They’re all fine films and worth watching. But – they are not French films. As I asked before, where are Jean Gabin, Simone Signoret, Jeanne Moreau, Michel Simon, and the like? It’s such a disappointment to have something, yet have nothing. And this is exactly what Cinemoi is.

TCM is taking a night to observe the 60th anniversary of Cinerama, the revolutionary three-camera process designed to give motion pictures the added weapons to compete with the new monster called television.

This documentary is nostalgic about the legendary three camera and three projector process that hoped to revolutionize motion pictures and not only lead the industry into a widescreen era, but also effectively compete with television by giving audiences something they wouldn’t get at home. The documentary combines Cinerama clips with behind the scenes footage, and new interviews especially for this film. It’ll not only take the viewer back to that nostalgic era, but also supply a needed historical perspective at this failed attempt to change the film industry.

It’s followed by a documentary from 1952, when the process was first getting off the ground, This is Cinerama. Talk about nostalgia. If this doesn’t do it, you’re watching the wrong documentary. And a midnight repeat performance of Cinerama Adventure is followed in turn at 2 am (what an ungodly hour) by the Cinerama film How the West Was Won. Even though TCM tries to duplicate the process by using letterboxing, there is still an unbridgeable gap between what’s on your television set and what could be experienced at the theater. IMAX has replaced the Cinerama process in theaters, trying to give audiences a different movie experience, but most local theaters are multiplexes, with screens too small that one might as well be watching television at home on a big screen.

My reason for including this minor entry in the Hammer horror franchise is that, 10 years after Hammer debuted The Curse of Frankenstein and began an entire new horror cycle, they were clearly running out of ideas.

By this time Baron Frankenstein (Cushing) has lost much of his evil sheen from The Curse and by now is simply an obsessed monomaniac. While some people do jigsaw puzzles, he puts together monsters.

The plot, such as it is, concerns Hans, who is wrongly executed for murder even though he has an airtight alibi. But for reasons of chivalry he refuses to use it. It seems that on the night in question he was in bed with the victim’s disfigured daughter, who he had rescued that day from tormenting bullies. Distraught, Christina throws herself into a lake after seeing her lover lose his head (literally).

Baron Frankenstein to the rescue. All he has to do is to take Hans’s brain (and also his soul), and transplant it into Christina’s body, upon which he has done much to transform her into a ravishing blonde beauty. With that sort of craftsmanship today, the Baron would be the toast of Hollywood, deluged with more requests than he can fill. The results, however, are not what the Baron imagined they would be. (Are they ever?) Christina avenges herself on her father’s real murderers by luring them into dark alleys with the promise of sex and then dispatching them.

You’ll need to subscribe to the MGM Channel to get this one, but it’s worth it. This is one of those “so bad it’s good” pictures. Starring long since has-been actors J. Carroll Naish and Lon Chaney as Dr. Frankenstein and his mute killer-servant Groton. (By this point Chaney was so personally devastated by the effects of alcohol that he couldn’t remember any lines, so they made him into a mute.) Enter Dracula (Zandor Vorkov, aka stockbroker Roger Engel, one of the movie’s investors), who tells the good Doctor where the Frankenstein monster is currently buried, and – could he help Drac revive him? Of course he can, and the fun begins. 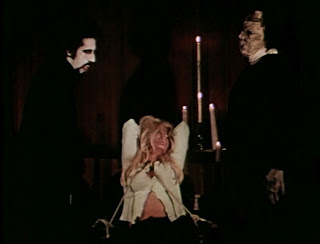 Vorkov, whose name was suggested by Forrest J. Ackerman, (who plays a victim in the flick) is expectedly ridiculous, looking like Frank Zappa in mime makeup. Bad film aficionados will love the fact that Naish’s false teeth click every time he speaks one of his lines. Also look for Russ Tamblyn and his gang. It seems that this was originally supposed to be a sequel to Adamson’s motorcycle gang epic, Satan’s Sadists. Tamblyn and his gang were supposed to be helping a mad doctor and his crazed assistant with his experiments on young women, but halfway through the original financing was gone and with the new money came a change of plot, so the remaining footage was incorporated into the new film with the result that Tamblyn and his gang seem to wander in and out aimlessly. It’s achieved cult classic status over the years. Tune in and you’ll quickly discover why.

TCM kicks off a night honoring rare animation with this classic from the Fleischer Brothers. This was the first feature from the brothers, who were responsible for creating such cartoon icons as Koko the Clown and Betty Boop and for bringing the adventure of Popeye to the screen. Here they take on the Jonathan Swift classic, long a favorite of Max Fleischer, whose father loved the book and read it to him at bedtime. To bring the story to animated life, the Fleischers used a technique they invented called rotoscoping. This consisted of tracing over frames of live-action film. It sped up the animation process because it was easier to trace over than create each separate cell movement, and was of invaluable help in animating human figures.

In the hands of the Fleischers, however, the story soon degenerated into a slapstick farce woven around a Romeo and Juliet love story concerning two Lilliputian kingdoms that go to war. It is up to Gulliver to stop the war and reunite the lovers. It also introduces the character of Gabby, a comic sidekick that Max Fleischer later developed into a star of his own cartoon series. Gabby’s voice is supplied by Pinto Colvig, who later became famous as the voice of Goofy.

This is a rarely shown feature, to say the least. I haven’t seen it myself for about 30 years or so. I remember the last time I caught it was on a Sunday afternoon. (Remember when television stations used to show movies instead of infomercials?)

Also called Hoppity Goes to Town and Bugville, it’s a pleasant little feature about the residents of Bugville and their various problems, such as co-existing with humans. Our hero is Hoppity the Grasshopper, and his love is Honey, the daughter of Mr. Bumble. Hoppity has been trying to help a human couple, Dick and Mary. Dick is an aspiring songwriter, and if he can pen a hit song then he and Mary can move to a house – with a garden. But the dastardly C. Bagley Beetle, who also has designs on Honey, tries to foil Hoppity at every turn.

Not much of a plot, and, truth be told, the mediocre Hoagy Carmichael/Frank Loesser score doesn’t help it along. However, listen for the voice of C. Bagley Beetle. Animation enthusiasts will be delighted to learn that Tedd Pierce, longtime storyman for the Warner’s cartoon unit, supplies his voice.

TCM has decided to keep the cartoon festival going with a selection of rare UPA and silent cartoons from the vaults. If you are an animation buff – and even if you’re not, this is a must see, for outside of a DVD release, you’re not going to see these. And I sincerely doubt if even TCM will repeat them. Among them are The Unicorn in the Garden (1953), Gerald McBoing-Boing (1951 – original story by Dr. Seuss)), Rooty Toot-Toot (1951), The Tell-Tale Heart (1953), and The Ragtime Bear (1949), famous for being the first appearance of Mr. Magoo.

Posted by Celluloid club at 7:27 PM