The Hobbit: An Unexpected Journey

The Hobbit in Russia

J. R. R. Tolkien’s beloved tale gets the full respect it deserves, thanks to today’s technology and 3D effects. Several times I sat there wondering, “How’d they do that?” The special effects department pulled out all the plugs to assemble a traveling company of 13 dwarves, a hobbit and a wizard (Ian McKellen as Gandalf) who towers over all of them, Orcs riding Wargs (fearsome wolf-like creatures), goblins, huge trolls, elves and spectacular scenery that could only be Middle Earth.

The movie begins with the back-story of the dwarf kingdom inside Erebor, the lonely mountain where they have built an entire city from the minerals mined from the mountain. You want gold, emeralds, diamonds, sapphires and rubies? Erebor delivered all to the artisan hands of the dwarves under their king Thror. But Thror got greedy for more and more gold. When the miners discover the Arkenstone (an immense multi-colored precious gem) he sets it over his head in the back of his throne. Unfortunately all this wealth draws an even greedier, and much more powerful creature, Smaug the dragon. Smaug attacks and incinerates what he doesn’t destroy, ousts the dwarves and takes over, sleeping on a huge mound of gold and gems. The king of the elves decides it to be folly to fight the dragon and leads his people away. Therein starts the distrust between dwarves and elves. In a battle with the Orcs, Thror is beheaded by the Pale Orc and Thorin slices off his left hand. Still, the dwarves are a people without a home.

Gandalf gathers 12 of the surviving warrior dwarves at Bilbo’s (Martin Freeman) hobbit house much to his dismay (Hobbits do not party without invitations or go on adventures). They are joined by Thorin “Oaken Shield” (Richard Armitage), son of Thrain, grandson of Thror. The 13 want to return to and take back Erebor from Smaug and the Orcs. But Orcs can smell dwarves. “That is precisely why I chose Mr. Baggins as the 14th member of our company,” says Gandalf. “Hobbits can go unnoticed by most fell creatures and Orcs cannot smell them.” Although he doesn’t want to, Bilbo signs on and they depart, meet the elves in Rivendale, a wizard named Radagast (Sylvester McCoy) who rides a sledge pulled by rabbits, face Trolls who steal their ponies for food, Orcs who want to destroy them and Goblins who capture all but Bilbo.

In the dark recesses of the goblin stronghold, Bilbo meets Gollum, a loincloth-clad pale-skinned creature with big blue eyes who talks to himself and possesses one of the rings of power, which he calls “my Precious.” While trying to gobble a goblin Gollum drops the ring and Bilbo puts it in his pocket. With only his elvin-bladed sword to fend off Gollum, he agrees to a riddle contest and eventually gets away when the ring drops on his finger and he realizes that he’s invisible. Bilbo could easily have slain Gollum but has pity on him and escapes.

Getting toward the two-and-a-half-hour mark, there is a final encounter with the orcs and Thorin realizes the Pale Orc is not dead as he thought. There is a horrific battle between the party and the Wargs forcing them to climb trees at the edge of an extremely high cliff. Galdalf speaks quietly to a butterfly, which flies off and summons the Eagle King and his minions who rescue the party and fly them off to a pinnacle.

The movie is two hours and 46 minutes long and at this point the party looks out and sees Erebor, hundreds of miles away. A thrush flies by them and alights at the gate of Erebor and tries to crack a nut. The scene shifts to a mound of gold inside the mountain. A bluish-green claw emerges and Samug’s eye opens and the movie ends. Seriously? I felt hornswoggled. That’s only half the story. Oh well, I guess another two-hour-plus movie is coming.

On the other hand, the New Zealand scenery is indeed fantastic and enhances the adventure beautifully. The musical score and choral backgrounds are majestic glorifications of the action onscreen. Cate Blanchett dazzles the audience as Galadriel, the Lady of Lorien. Elijah Wood makes a cameo appearance as Frodo and the great Christopher Lee returns as the foreboding wizard Saruman the White. The Hobbit could stand some scene shortening to get it under two hours, but on the whole it’s an exciting, beautiful tale - even if it isn’t finished.

Restaurants serving authentic Russian food seem to be proliferating in New York City and it’s actually becoming a cuisine. After the Russian Tea Room, Caviar Russe and the Brasserie Pushkin, I thought I couldn’t be impressed further. But I was wrong. The moment I entered the canvas “air-lock” door I was dazzled by the basically red (surprising?) and gaudily neon-lit interior – there is a four-foot red neon star over the bar and an equally large hammer and sickle on the adjacent wall backed by an amazing selection of vodkas. 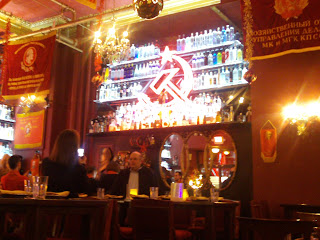 The girl at the captain’s station led me to an isolated table by the window where I was dwarfed by floor to ceiling red velvet drapes and white gauze curtains. Three menus were left on the table with a tall pitcher of ice-cold water for my plastic tumbler and the Russian bread with butter. One was the wine list – very affordable. One was the dinner menu and one was a list of 126 Infused Vodkas. I was agog. Any flavor of vodka was at my beck and call. Choosing was very difficult – peach, pear, pepper, cinnamon, vanilla, pumpkin, aloe vera… In Communist Russia this place would be classified as decadent. I chose Truffle Vodka and it was unbelievable. The smell was exactly the deep earthy aroma of black truffles and the flavor proved the infusion. I couldn’t wait to order dinner.

A soup I’ve never tasted caught my attention first. Called Solyanka, it’s a hearty tomato-based soup flavored with dill and made with assorted smoked meats. With a bit of sour cream in every spoonful, it was an exciting adventure. I ordered a bottle of 2009 Erath Pinot Noir from Oregon which, even though screw-topped cap, was a delightful accompaniment to the whole meal.

Next course I chose Pellmeni Nasha Rasha, their own version of a Mongolian dish of tender ground lamb in wonderful steamed dumplings and served with a dark red horseradish sauce that made the flavor pop. I love Pellmeni but these were the apex of dumpling-hood. And…they were served from under the skirt of a beautiful Russian doll as a cozy. This made me anticipate the main course even more.

Assuring my waitress that I had all the time in the world, the extra time needed to cook my dish passed easily. The Chicken Kiev was about the size of an oven-stuffer leg, served on the bone and coated in a firm but delicious bread-crumb crust. It was much larger than I’m used to and when cut into didn’t gush garlic butter as expected. I noted this to the waitress and suggested that the chef make them smaller and maybe serve two. Nevertheless, the chicken was still moist and well-cooked and I enjoyed it, along with the side dish, Buckwheat. I guess you could consider it the wild rice of polenta. I finished the chicken but had the buckwheat wrapped to go home.

My waitress asked if I wanted dessert but they only had one, Blinis – a Russian form of crepe – and I chose to order another vodka instead, Bacon Chocolate Vodka. You have to smell and taste it to believe it. After my waitress assured me that Brasserie Pushkin has moved on (to my surprise – but not considering their wine prices), I’m hoping to revisit Nasha Rasha several more times for their amazing infused vodkas and hearty Russian cuisine. And, talk about caring, the menus come with their own attached flashlights for easier reading in low lighting.

For the Dinner and a Movie archive, click here.
Posted by Celluloid club at 11:05 AM