Her Pippali Are Showing!


The first full week of work for the New Year was, in the words of Jim Morrison “Strange Days.” There wasn’t a full moon but things were somehow stranger than usual. I left the Christmas decorations up until Tuesday because there was still one of my co-workers who had not seen them and fortunately he showed up Thursday. Friday, I took them all down first thing in the morning. The office looks so sterile without them. Then, Saturday I took the wreath off my door at home and “de-Christmased” the house. I’m always surprised when, what took three days to put up can be disassembled in less than one. I re-boxed the lights while watching TV. Yes, I’m that obsessive-compulsive to snap each light back into their little plastic grid and slide the whole string back into the original box. It packs away better that way and is not tangled the next year.

My first new restaurant of the New Year was (Surprise!) Indian, and what an Indian! The movie was only a first in that it was an arty drama touted as a comedy (not funny, though) and a semi-scifi allegory. Go figure. Enjoy!

Let it be known from the onset that my rating for this film comes from the fact that it is indeed a good movie. It failed to score a perfect five because it is classified as a “comedy,” which couldn’t be farther from the truth either in the Shakespearean sense or the humorous sense. The only people I could conceive would think any part of it funny would be the same sad subscribers to Schadenfreude who go into gales of laughter whenever a groin shot happens on “America’s Funniest Home Videos.”

That said, the story, which takes place in some unexplained future time in Los Angeles, introduces us to Theodore (Phoenix). He is employed, and apparently has an promising career, at Beautiful_Handwritten_Letters.com, a type of firm in which the employees write letters for clients who (I guess) are too preoccupied with trivial things or who are not imaginative enough to write their own. Though he’s average looking and a bit gawky in appearance, Theodore’s letters (which he dictates to a computer doing the actual writing) are superior to others in the company in their sensitivity and content and he gets accolades from his co-workers and his boss. However, as competent as he is in his job, Theodore is going through a divorce from his wife Catherine (Mara) because he cannot translate the feelings he expresses so easily in letterform to an actual relationship with a person. 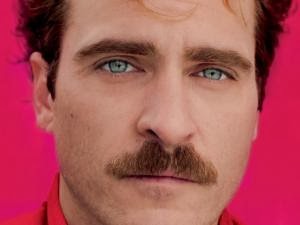 He lives alone high above LA in a Wilshire Boulevard address (the only clue to the city – there are many fanciful skyscrapers added to the scenery than actually exist now) and visits occasionally with his friends Charles (Letscher) and his girlfriend Amy (Adams). They worry about him because he can’t seem to move on with his life and get a new girlfriend. Small surprise there, because everyone in LA is totally non-communicative with each other. The street scenes show individuals in every crowd talking to some computer, email service or internet site through a small device plugged into their ears. They don’t even register someone else’s presence even when that person shoves them aside.

Theodore tries various online services including a call-girl site where he hears (but doesn’t see) SexyKitten (voiced by Wiig), but even then the relationship gets too weird for him to handle. One day he learns about a service called “OS-1” – an interactive empathic program that can carry on a conversation, laugh at jokes, and can evolve its programming as the relationship progresses. He tries it and meets (but never sees) Samantha (Johansson). She is like no woman he has ever met, and soon he becomes comfortable telling her everything. She’s able to sense his moods and react positively. They fall in love. He takes her to the beach. He takes her to a secluded cabin in the snowy mountains. He introduces her to his friends (she’s contained in a small iPhone-like device with a camera lens for an eye). They even have an argument. Everything is going well and Theodore gets up the courage to sign his wife’s divorce papers (and does). It’s soon after this he starts to think, “I’m dating a computer program.”

He asks Samantha if she talks to anyone else and she answers with a number near five thousand others. When he asks how many she fell in love with the result is over six hundred. (These are the jokes in this film, by the way.) Samantha finally confides that she has learned so much from him that it would be impractical for them to stay together (she has evolved beyond him) and she leaves him forever. Later Theodore learns that the same thing happened to everyone who signed up for an OS-1 companion. The last scene shows him and Amy on the roof of their impossibly high apartment building (she and her boyfriend Paul also broke up) and they sit watching the sunset together. Can he now relate to a real person? We’ll never know.

Jonze’s writing and directing is arty, moody and an almost allegorical statement about the impersonality of society in general. It’s a light, sad drama that makes one think, “Is that where we’re headed? Or are we there already?” Phoenix does a superb job of morphing through several emotions, I didn’t care for the many outrageous close-ups of his face. At one time we could see one moustache hair out of place – too close. Everyone else was too insignificant to matter. While nominated, I don’t think Her will win Best Picture.

Rating: 4 out of 5 Martini glasses.

The welcome page of Pippali’s website tells of the meeting of Peter Beck, a long sought-after Indian Chef and Pradeep Shinde and their resulting restaurant that will “change our perceptions of Indian food.” The name “Pippali” translates to mean a long pepper used in Ayurvedic medicine as well as a spice. I learned from a friend at work that this restaurant is again primarily focused on Southern Indian cuisine, or, as Chef Beck refers to it: “contemporary Indian.” 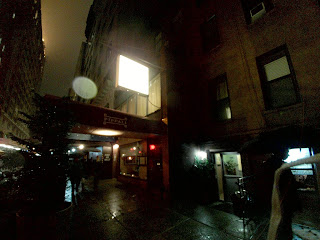 On the street, you can find Pippali by their brightly lit logo, a circle with what looks like a child’s drawing of the flower spike of the pepper plant. Inside, all is simple warm browns and muted golds with three oval mirrors on one wall and four netted lozenge-shapes chandeliers providing the soft lighting. There is no bar at Pippali but they do serve beer and wine with two reds from India. They were out of the syrah but the merlot-like 2010 Mizra Ghalib from Jaipur had just enough body to accent an Indian meal. Various servers brought me the standard Pappadum (a crispy paper-thin bread for dipping), a selection of chutneys – Tamarind, Mint, and Mango, and a glass of water.

My waiter, Sameer, was very helpful in choosing my courses for my “Indian Feast.” The soup, Chapli Shorba – a chicken/tomato based soup with Indian style sausage, leeks and fennel – was piping hot and nicely spiced and served in a square bowl (but I managed to get every drop). 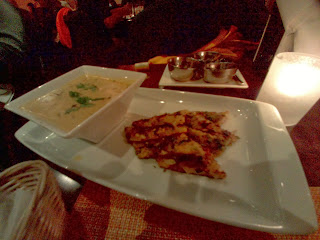 The appetizer, Thalipeeth – crisp, soft tapioca and gram flour with peanut tikki (cutlet) and kadi (a mildly spiced yoghurt sauce made with asafetida, a bitter root that can substitute for the flavors of onion and garlic) – was a delightful departure from the usual samosas and pakoras; a unique flavor. The story of the two dishes arrival is rather funny. A server brought them out together and must have thought he made a mistake because I was dining alone. He apologized and took them away. Shortly after, Sameer advised him that they were both supposed to come to me and he apologized again.

Sameer provided interesting details and a little history about each dish I ordered as it arrived. I decided to order a bottle of the Jaipur red judging by the goodness of the single glass. In Indian restaurants generally it is apparent that several dishes are served simultaneously so next to arrive were the main course, the side dish, the rice and the bread.

Let’s start with the simple dishes. The rice was a good-sized serving of Basmati rice, aromatic and flavorful without enhancement. The bread was Paratha, a multi-layered flat bread usually cooked in a Tandoor oven. The side dish was totally new to me. Lahori Keema was ground lamb and kidney beans mixed with onion, ginger and garlic – an exciting taste and not too spicy. 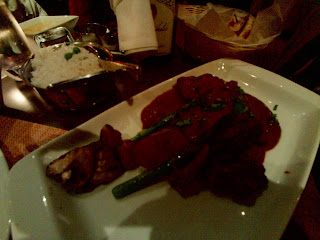 But the Grand Dame of the meal was the entrée, a house specialty, the Dum Quail – Quail deboned and marinated in spices and braised in a broth of red wine, served with asparagus. I’ve never seen quail on an Indian menu and this one was unbelievable! It was tender enough to cut with a fork, juicy and spicy and (I swear) there was enough meat for this quail to have been about the size of a chicken in life. I was more than impressed. 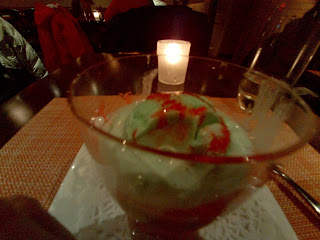 Also, a usual thing as I’ve been getting older, the ability to finish all these luscious dishes in one sitting has been waning. I wanted to try dessert, so I had the remainder of the entrée, side dish, rice, bread, and sauce from the appetizer packed up to go and ordered the Falooda – pistachio ice cream with “vermicelli” rose syrup. No they didn’t serve a pasta with the ice cream but there were shreds of coconut imitating vermicelli in the rose syrup – delightful.

Then, after a hot cup of Masala Chai (spiced tea) I was finished. Sameer introduced me to owner Pradeep Shinde who smiled proudly when I raved about the food and assured him how comfortable I felt. I didn’t get to meet Chef Beck, but I’m sure our paths must have crossed when I dined at Chola, where he worked last. Pippali is now definitely one of my favorite Indian restaurants. I’m sure others agree. The 20-some-odd tables were all occupied the entire time I was there. I guess their perceptions of Indian food were changed as well.

For the Dinner and a Movie archive, click here.
Posted by Celluloid club at 12:10 AM