The Hobbit: The Desolation of Smaug

The Desolation of Smaug on Henry Street

After waiting a year (since last Christmas) and having slogged through the three-hour and two-minute The Hobbit – An Unexpected Journey only to see in horror that the tale was unfinished, we now are treated to the slightly shorter (two hours, forty-one minutes) second installation. Yes, the tale of the Halfling is still not finished. Hopefully the story will end Christmas of 2014.

Granted, the scenery is breath taking, the stage sets are Herculean in scope and Baroque in complexity, the costumes and make-up are spectacular and the acting sterling, but both movies could easily have been made in less than two hours. Several scenes were excessively long (including some of the action scenes); there were many moments of “realization” that degenerated into tableaux. Director Peter Jackson has taken a book, originally less than a third the length of the entire “Lord of the Rings” trilogy and stretched it into an equally long feature.

If you remember, the first chapter ended with Gandalf (McKellen), Bilbo Baggins (Freeman), Thorin “Oakenshield” (Armitage) and his troop of dwarves being rescued from the Orcs by the Eagle King and his fellows. 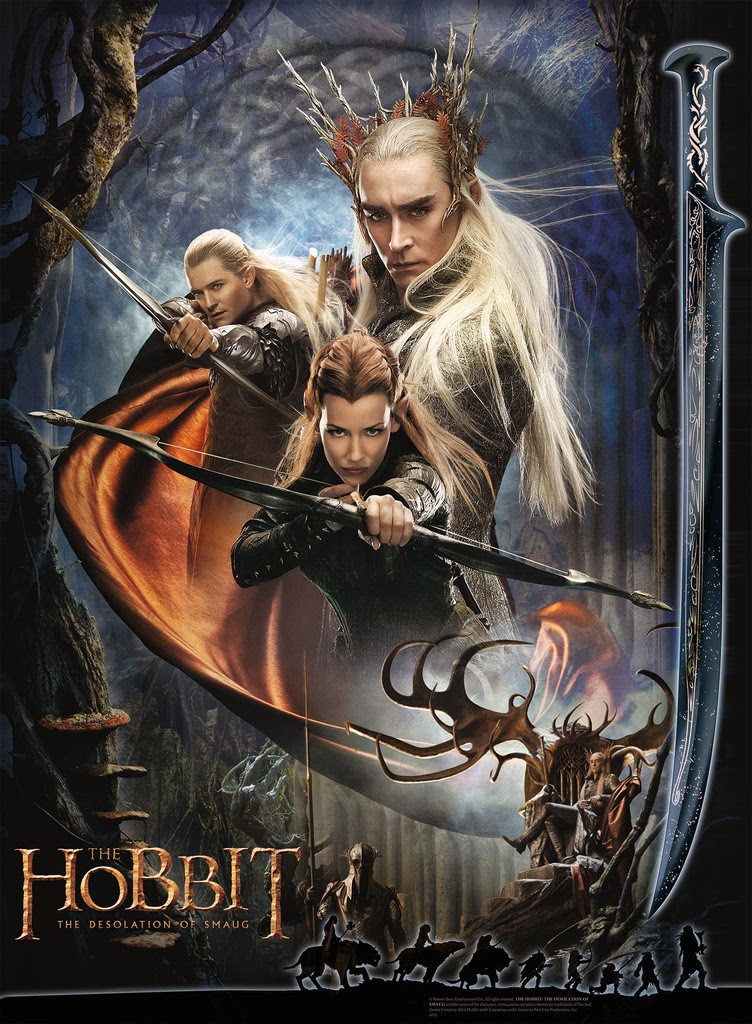 Now the intrepid group is still fleeing the Orcs by first staying at the home of Beorn (Persbrandt), a “skin-changer” who is part-time a very tall, strong man and the rest an enormous, vicious bear. Beorn doesn’t like dwarves but he helps them because he hates Orcs more. He loans them horses to get them to their next peril, Mirkwood Forest, where Gandalf leaves the group on a separate quest to Dol Guldur. He advises them to stay on the path. Well, guess what? Only a little ways into the forest and they lose the path and are quickly ambushed by huge spiders that wrap them up in silk and hang them from their webs. Thanks to Bilbo, they are cut down and, with the help of Legolas (Bloom) and Tauriel (Lilly) – two of the forest elves – the troop are taken to Thranduil, King of the Forest Elves (Pace) who offers Thorin a deal. Thorin turns it down and all of his dwarves are locked up. Again, thanks to Bilbo (and the Ring of Power – which makes him invisible when he dons it) they are once again set free in empty barrels to ride the rapids flowing to the lake (one of the many over-long scenes), all the time being harried by Orcs and dodging Elfin arrows. At this point it might be good to note that Tauriel was not in the original book, but she makes a nice compliment to Legolas and a possible (not in a million years) love interest for him.

The river takes them to meet Bard (Evans), a barge merchant from Lake Town and they barter their way to his home. They discover that Bard’s father was the only person who almost killed the dragon Smaug with a black arrow, but merely dislodged a scale covering a vulnerable spot. Thorin convinces the greedy Master of Laketown (Fry) to back their quest and loan them a barge for the next step of the journey to Erebor, the Lonely Mountain. Again, if it weren’t for Bilbo, the dwarves would not have figured out how to climb up to the “secret door” in the mountain and . . . figure out the true meaning of the riddle of the key to open it. Now it’s up to the poor Hobbit to sneak into the main chamber of Erebor, which is filled wall-to-wall with mountains of gold and jewels to seek out the “Arkenstone” and not wake up the Dragon Smaug (voiced by Benedict Cumberbatch) buried underneath. After another excessively long (but impressive, computer graphic-wise) scene, the chase is on, the dwarves try to destroy Smaug and fail (it only makes him angrier), Smaug flies off to destroy Lake Town and the second movie ends.

Don’t get me wrong. This is an excellent film with superb special effects. The story is engaging, even with the imaginative addenda. The pace is good and action scenes mind-boggling. I just wish I could have been present for the final editing.

Rating: 4 out of 5 Martini glasses.

Sometimes you want to go where everybody knows your name. These words from the theme song to “Cheers” ring clearly for me at this, my favorite restaurant of all time. Though not a New Year’s resolution, I’ve made it a best practice to start every year of dining with this one. Why? It’s not a grand café, it’s not fancy in the least, it’s almost off the beaten track, and many say it’s noisy. I go there again and again and invite friends there because it’s warm and friendly, cozy and comforting, and my own secret palace of palate-pleasing food prepared perfectly (I would recommend anything on the menu to anyone) with an excellent selection of wines you will see nowhere else. This, in addition to getting a warm welcome from Chef/Proprietor Mark Lahm at the door and later getting a hug from Bonnie, whom I dubbed “the most exciting waitress in the world” (forget it guys, she’s married). No matter what dish you choose from the menu, Bonnie will make you want it more with a growled, “Oh yeah!”

Timing is everything at Henry’s End. They open at 5:30 pm (5:00 pm on Sundays) and don’t take reservations for parties under three people. Another important consideration is the Brooklyn Heights regulars who love and frequent Henry’s End. This year will mark 30 years of continuous existence and I’m hoping Mark plans something special (and of course notifies me). 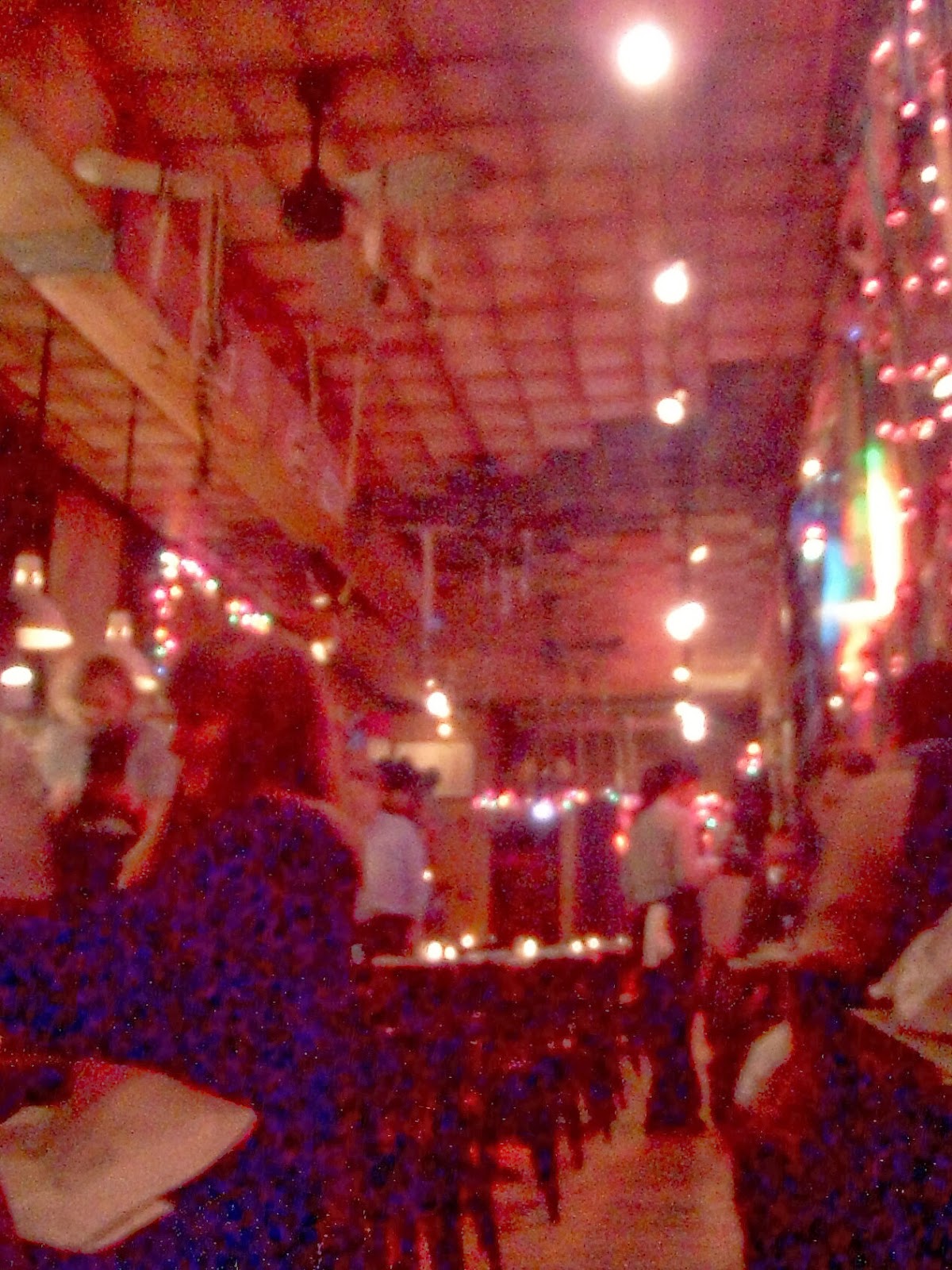 My favorite table by the back window was available and already the intoxicating cooking aromas were filling my head from the open kitchen. Mark knows how I like my martini and prepared it and Bonnie brought it – always perfect. I took my time over the menu, knowing most of the dishes, but aiming for the “Game Menu” which usually starts in the fall and continues through the winter. Slightly disappointed that this year kangaroo was not included I decided on a three-course meal with selected wines by the glass (or bottle) from the whiteboards hanging near the ceiling at focal points in the restaurant.

Another waiter (and also a familiar friend) brought the water and breadbasket full of crusty, fluffy slices and sesame-seed studded bread sticks. Bonnie appeared next and I gave her my order. 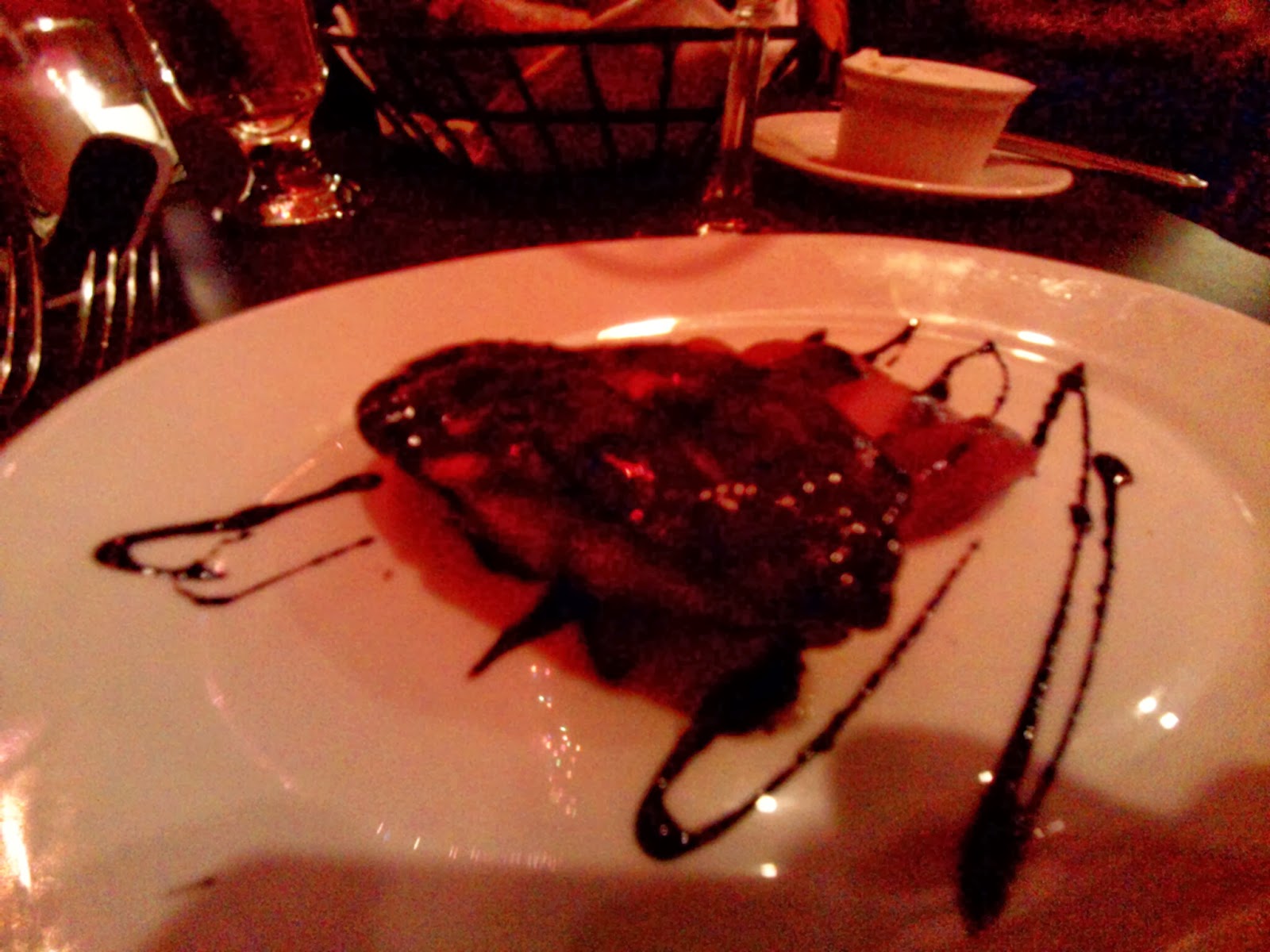 My second course, the New Orleans Turtle Soup, a dish I have every year for some reason never arrived and I didn’t notice it until I got home. Usually it’s rich turtle broth, slightly spicy with intense flavor from tomato and spinach and accompanied by sherry to add at the customer’s discretion. Oh well, next time. 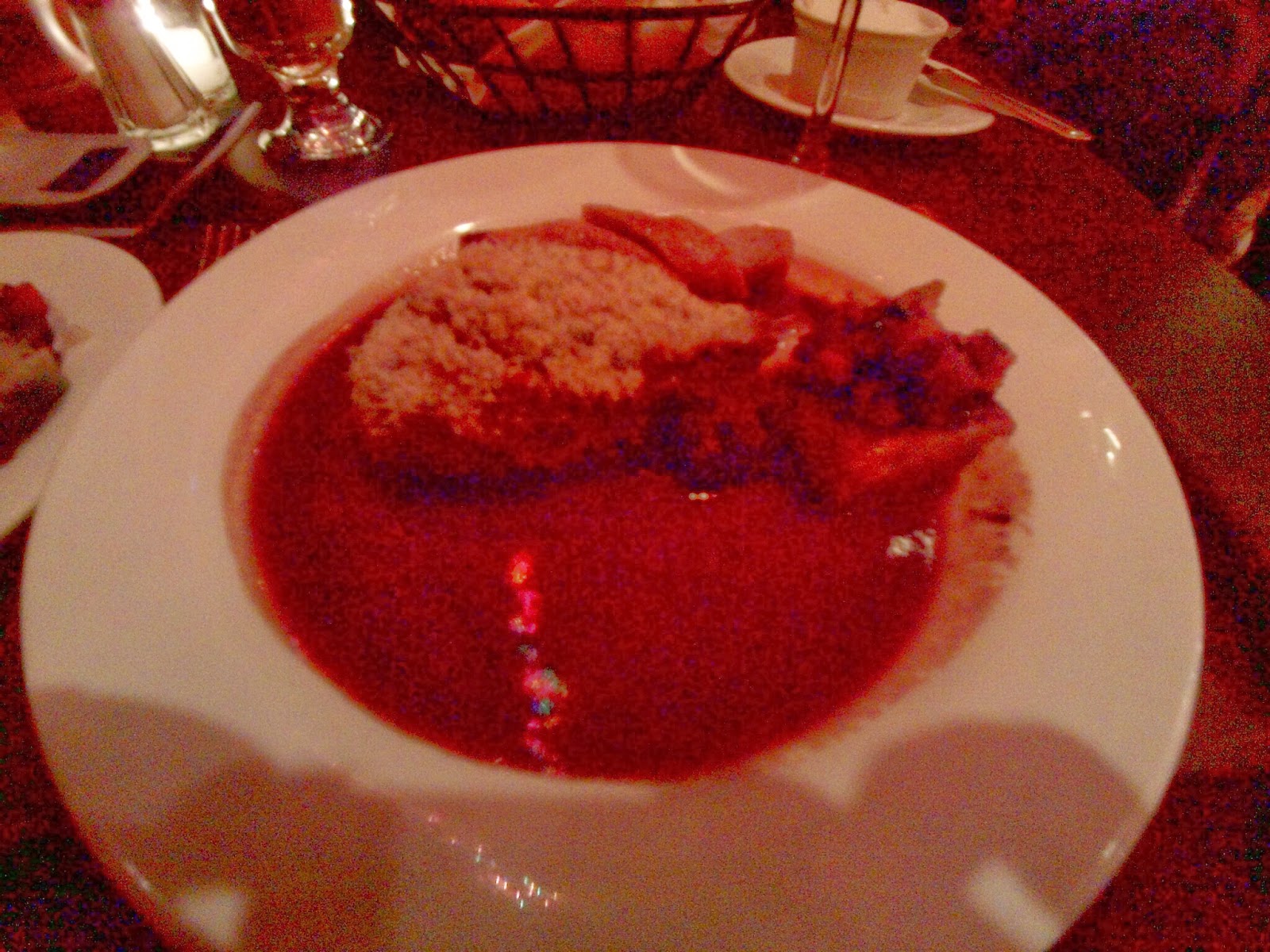 The main course arrived next – Mixed Game Grill, consisting of wild boar belly topped with pistachio pomegranate relish, rabbit sausage redolent of rosemary, and an herb crusted Elk chop with a lake of rich brown sauce. All three meats were perfectly cooked, tender and juicy and provided a smorgasbord of exotic flavors. The side dish, halved Brussels sprouts with grilled lardoons, added a smoky green accent to the meal. The 2008 Ridge Zinfandel from Ponzo vineyards made a great entrée even better.

The meal was so good, in fact, that the dessert paled in comparison. Two bites and I’m finished. It was a fluffy mound of sweet coconut-coated confection that proved to be too much for me. Maybe it was better that I didn’t have the turtle soup? I was comfortable. All that was left was pay the check, thank everybody for a wonderful time, and head back to Queens.

For the Dinner and a Movie archive, click here.
Posted by Celluloid club at 9:12 AM