What a crazy week! I am convinced that if Mondays were done away with and weeks began on Tuesdays, Tuesdays would become Mondays and the craziness would not be diminished. Snowstorm “Janus” closed our office at 1:00 pm last Tuesday and I decided to go home rather than risk a messy commute after my usual karaoke night. I emailed the host to let him know, alerted my Dad to my changed plans and even called the bar owner so that the darling waitresses would not be worrying about my not showing up. Told me the host told me in his email that he would probably be doing karaoke Wednesday at Muldoon’s and I adjusted my plans. The one thing I didn’t count on was my peripatetic friend (and dancing partner) Betty, who showed up Tuesday evening at Gabby O’Hara’s and called me at home to prove it. (She lives in Brooklyn.)

Then, on Wednesday, I show up at Muldoon’s, wave to everyone who knows me and wonder why the manager, “Murph” didn’t pay a visit to my table to chat - as he usually does. Then, after an appetizer I learn from the waitress that karaoke was canceled! Harumph! Well, they had my favorite dish - curried chicken with rice - and I finished my dinner and went home. Thursday morning I got an email from the host telling me the owner canceled karaoke at Muldoon’s. It was sent at 10:51 pm Tuesday and got to me on Thursday morning. Then, because of snowstorm “Janus” on Tuesday, Headquarters required the timesheets be input a day early. Sheesh! After typing and mailing 90 letters to Assembly members took my entire Friday, I was ready for my movie night out. Enjoy!

Ever since that stormy night in Geneva in 1816 (the “year without a summer” due to the explosion of Mount Tambora) when Mary Shelley wrote “Frankenstein – The New Prometheus” in a friendly contest with Lord Byron and Percy Bysshe Shelley, the creature from that story has undergone a multitude of incarnations and revivals. Up until 1931, the monster was merely a deformed man due to his cobbled-together birth. Jack Pierce, the make-up director for Universal used green base make-up on Boris Karloff so that his skin would appear deathly white in the black and white movie. Pierce also attached electrodes to either side of the creature’s neck for convenient “galvanizing,” and the most famous vision of the horrific experiment was established. Still without a name, the monster Victor Frankenstein reanimated was eventually called “Frankenstein” and achieved a “Bride” in Elsa Lanchester, a “son”, and a caricature in Herman Munster (played by Fred Gwynne for television). The green make-up became a hallmark. 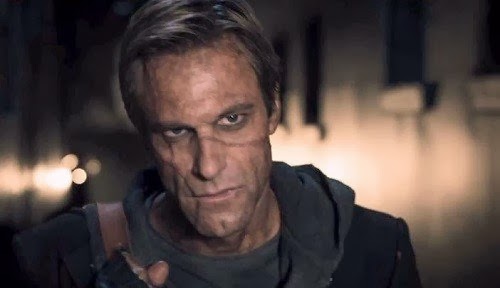 In I Frankenstein the creature is admittedly still unnamed until the Queen of the Gargoyles, Leonore (Miranda Otto), dubs him “Adam.” He discards his 19th century scraggly locks for a more modern appearance and rather than being tall, blocky and clumsy he is now ruggedly handsome, buff and a martial arts master with lightning reflexes. Eckhart plays Adam as a combination of the personality of Tony Stark with the charm of the Incredible Hulk and the righteous attitude of Batman to produce a new super-hero battling for life, freedom, and his own way.

The movie starts with a background story where Victor goes back on his promise to create a mate for his monster and dooming his own wife by the monster’s hands. He chases the creature into the icy forest and dies from the cold. Immune to the cold the creature buries Victor (Young) in the family plot and we are rocketed 250 years into the future. There is a war going on the humans know nothing of between the Gargoyles and the Demons which could end in the destruction of most of mankind and the enslavement of whoever is left alive.

The head demon, Naberius (Nighy) has been collecting corpses for 250 years, hanging them like chrysalides from an enormous structure that resembles a titanic drying rack for smoked fish, all connected to central source of extreme voltage for reanimation. He has enlisted the services of two eminent scientists, Carl Avery (Bell) and Dr. Terra (Strahovski) to recreate Victor Frankenstein’s experiment on an Olympian scale, but so far they’ve only been able to reanimate a rat. In order to be successful, they need either the creature or Frankenstein’s notebook, which has been hidden away by the gargoyles. Apparently the gargoyles have sent enough demons back to Hell that Naberius needs replacements – demons can only possess bodies that are devoid of souls.

I Frankenstein is a battle royal between the forces of good and evil, both of which want to destroy Adam. However, he will have none of either side. It’s only when he leads the remaining gargoyles to the secret hideout of Naberius that they realize his value and he achieves his own self-worth as a living being. It’s a special effects romp with demons spiraling down to Hell is huge bursts of flame, gargoyles flashing to Heaven in swords of bluish-white light, colossal building collapses, and dizzying aerial views. As for acting, even Nighy’s prowess couldn’t save an award for this film. The soundtrack is imposing (at times majestic) and the stage sets ornate and immense. The film ends with Adam acknowledging his familial heritage as he utters the last two words, the title. Say what you will but the implication is that there might be a sequel. What in the world will they do?

Rating: 3 out of 5 Martini glasses.

When last in Italy I learned the difference between a “Trattoria” and a “Ristorante.” A “Trattoria” is basically a sidewalk café where one would go for lunch or a casual supper. You can have pizza, pasta, salads and various dishes without overdoing it. In a “Ristorante” you commit yourself to dining, including appetizer, pasta and main course with or without a dessert and there is rarely pizza served. 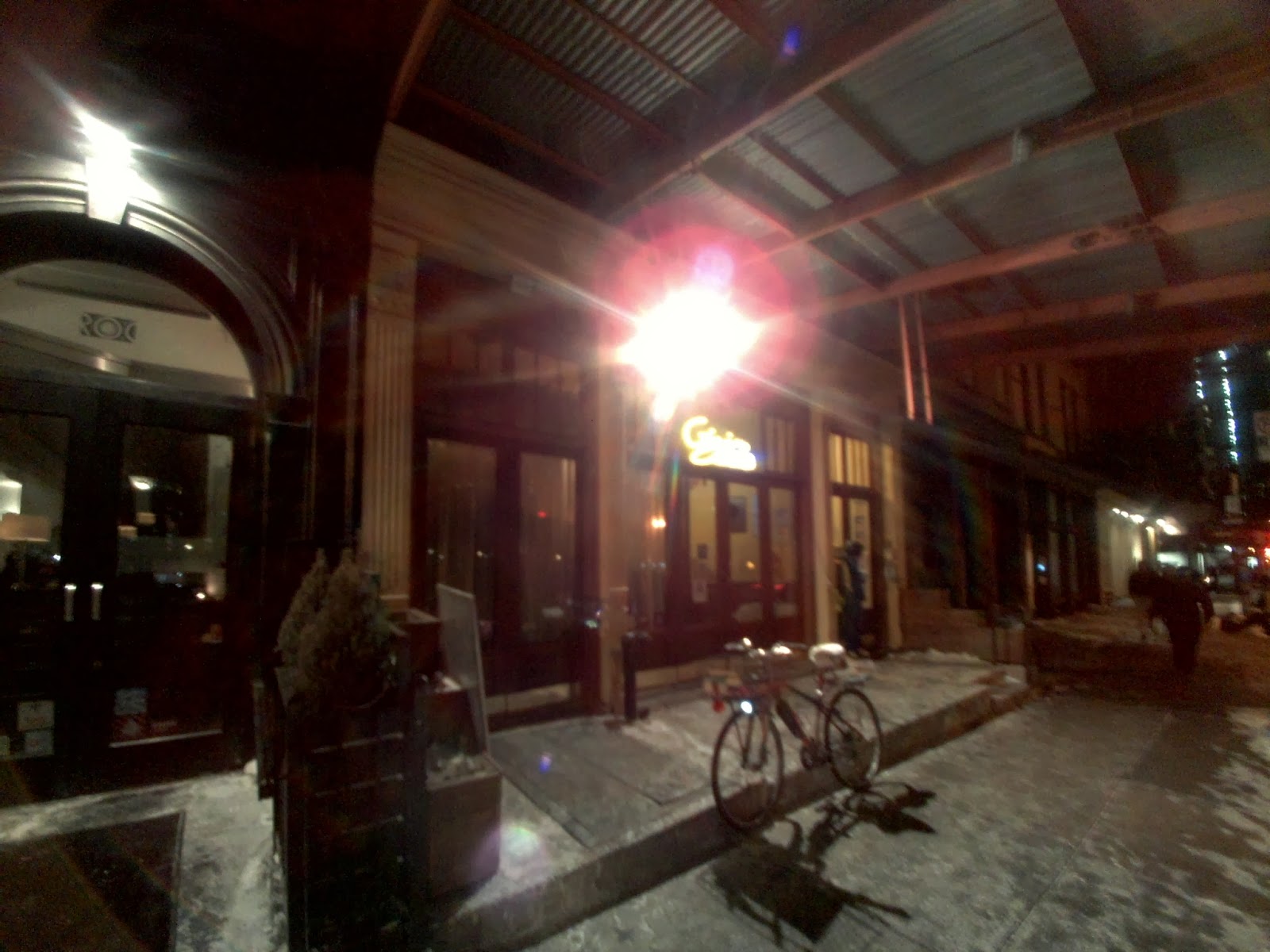 When I arrived at Gigino sheltered by its large corrugated tin, warehouse-like awning I was early for my reservation at 7:30 pm (a 7:15 time was not available) and the young lady at the Captain’s Station edged her way between several pizza delivery boys to greet me. She suggested the empty table right next to the pizza oven – a hulking maize-colored dome immediately to the left of the entrance. I felt the intense heat coming from it as well as the freezing cold whenever the door opened and demurred. She suggested I wait at the bar and she would obtain a table for me closer to my reservation time. The bar was situated immediately after the pizza oven and had exactly four stools, all occupied. I asked the young lady if I could wait anywhere else and she allowed me to sit at the first suggested table (I couldn’t imagine anyone besides a bloodless vampire wanting to sit there) and I agreed.

Gigino’s has been in existence for 20 years and is still doing a brisk business, even though it shares a wall with another Italian restaurant, Roc. (The movie Dinner Rush, starring Danny Aiello, was shot almost exclusively in Gigino’s.) Chef Luigi Celentano prides himself on fresh ingredients, homemade pasta and making dishes to order, a fact I was soon to learn through experience. 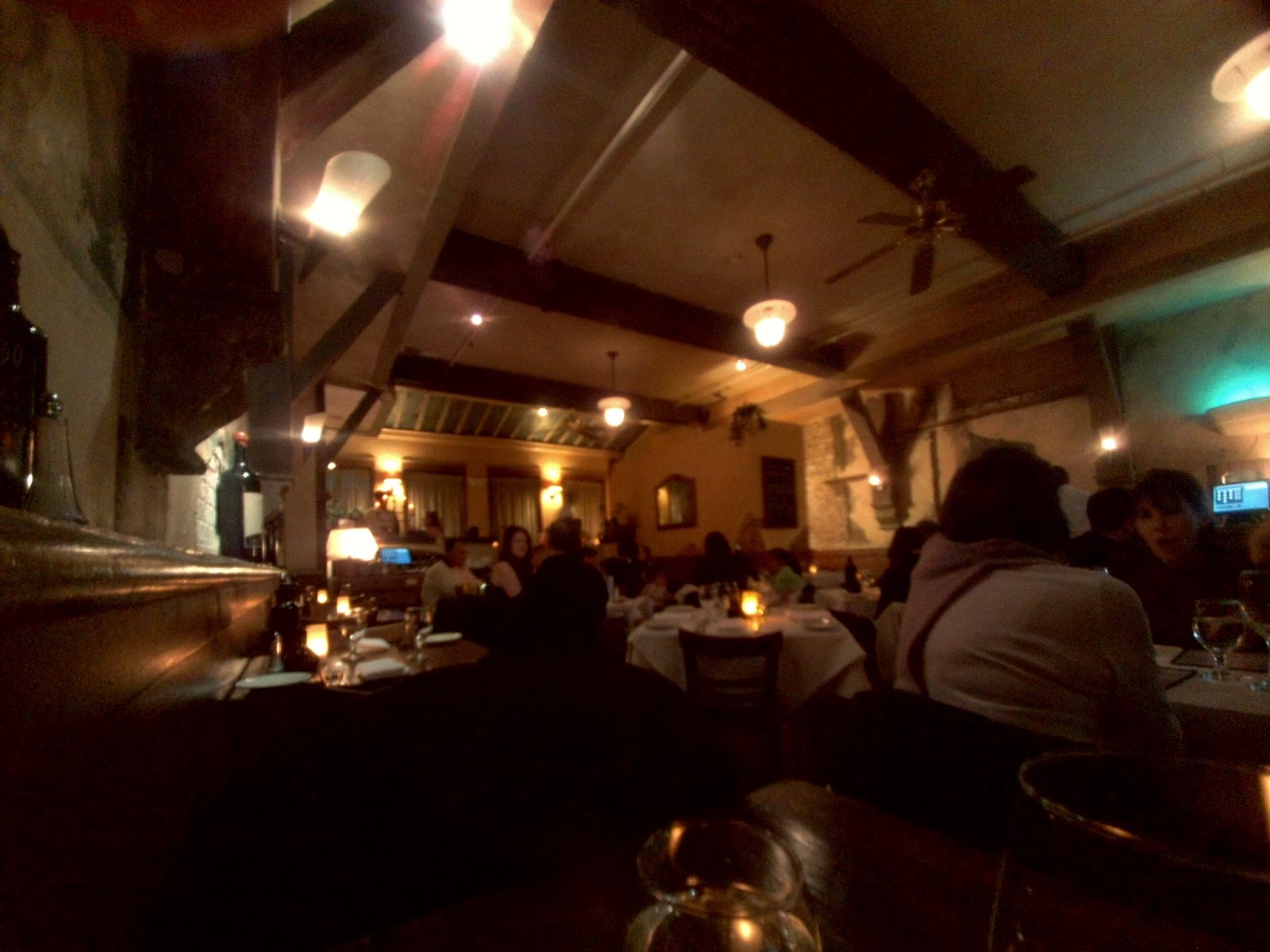 At exactly 7:30, a young man came to escort me to my table, the first table after the bar. The open brick walls enclosed several tables of families and couples both on my level and the upper level at the back of the restaurant. It was a bit of a tight squeeze getting into my chair because the portly woman sitting at the table immediately to my right had her chair too far back and wasn’t about to move. But I managed and, once seated was quite comfortable, that is until any servers or customers had to pass between her chair and my table. It was a good thing they were all agile, slim and experienced.

The menu and wine list were already at the table and another young lady brought me a glass of water. My server, Sarah soon appeared and asked if I would like a cocktail. I decided on the “GGG” which is short for gin, Grand Marnier, and grapefruit juice, garnished with a slice of lime. It was a nice concoction – not too sweet, not too sour. Fortunately I had examined the menu online first because choosing a three-course meal would have taken a lot more time than it did. The menu features 16 antipasti (appetizers), 10 insalatas (salads), 3 soups, 5 recipes for Foccacia (a sinfully delicious bread), 13 different pizzas, 15 pasta dishes, 16 main courses, 6 contornos (side dishes), and 16 desserts. This is in addition to the daily specials. I thought it would be easier to order the wine first. After discussing what Italian reds would satisfy my palate I asked about a curious entry dubbed simply “Super Tuscan”. The description from Sarah convinced me and I ordered it. It was a 2011 varietal Bruciato from Tuscany involving the grapes of six different varieties, including Sangiovese and Barbera and proved to be perfect for the feast I was constructing. 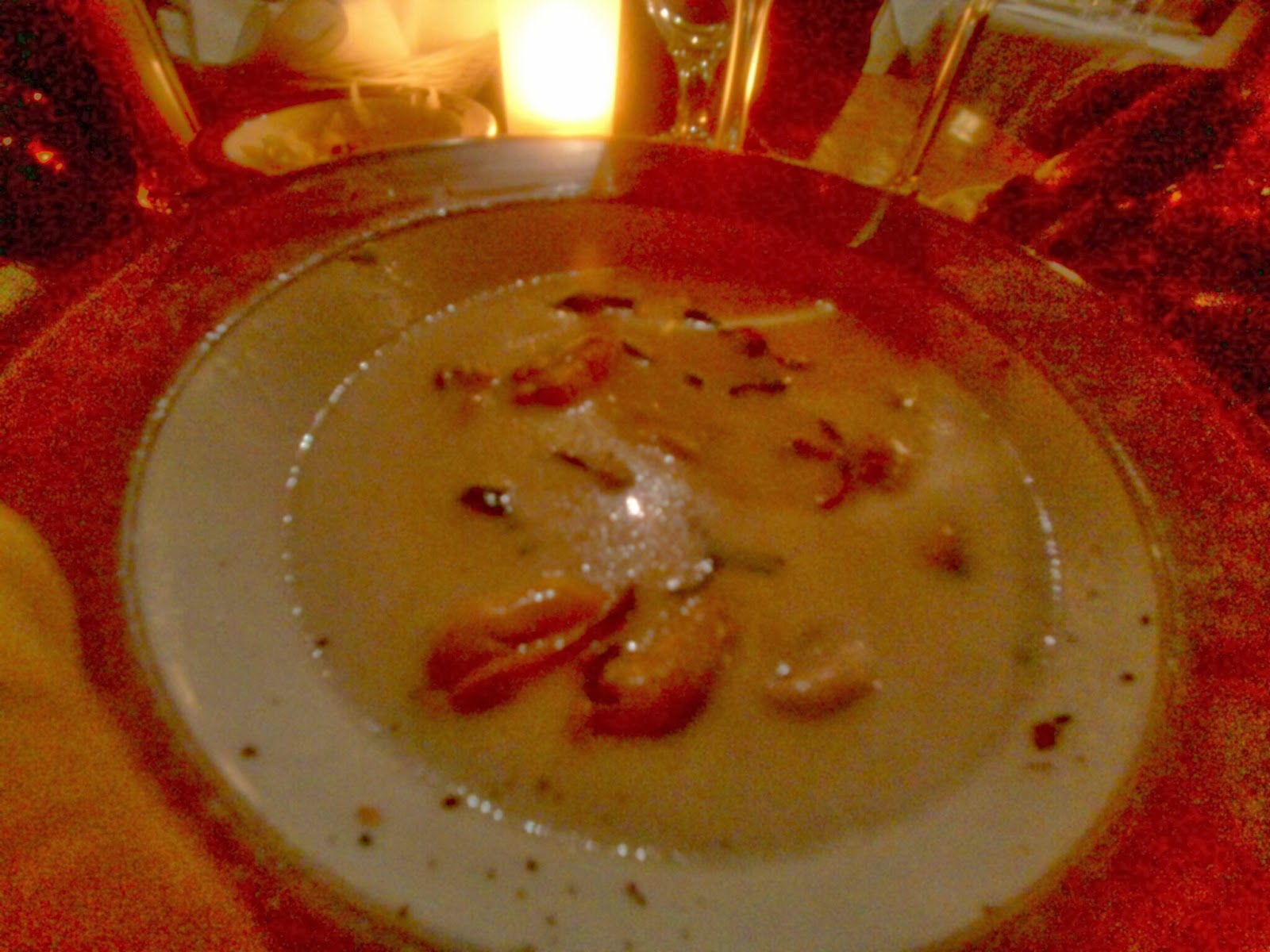 The first course was Cozze al Gorgonzola – mussels in a light bleu cheese cream sauce. When it arrived I extricated all the mussels from their shells and was left with a wonderful cheesy soup that I relished with a soup spoon (provided with the plate for the shells) to the last drop. Sarah dropped by and wondered where I got the soup but, upon explanation, admired what I did and wished she were dining with me. The remainder of my cocktail actually complimented the mussels, as did the first sips of the wine.

The pasta course was a half order of one of the daily specials. The obviously (from the delicate, slightly firm texture) homemade Cavatelli was mixed with ham, sausage, broccoli, cherry tomatoes and basil and wore a crown of shredded Romano cheese. I was in Heaven (or back in Italy – same thing) and briefly wondered how I would finish both it and the main course. Slow and steady, pace yourself, sip the wine, and suddenly the dish was done and I was mopping up the remains of the sauce with the little home-made rolls they provided. 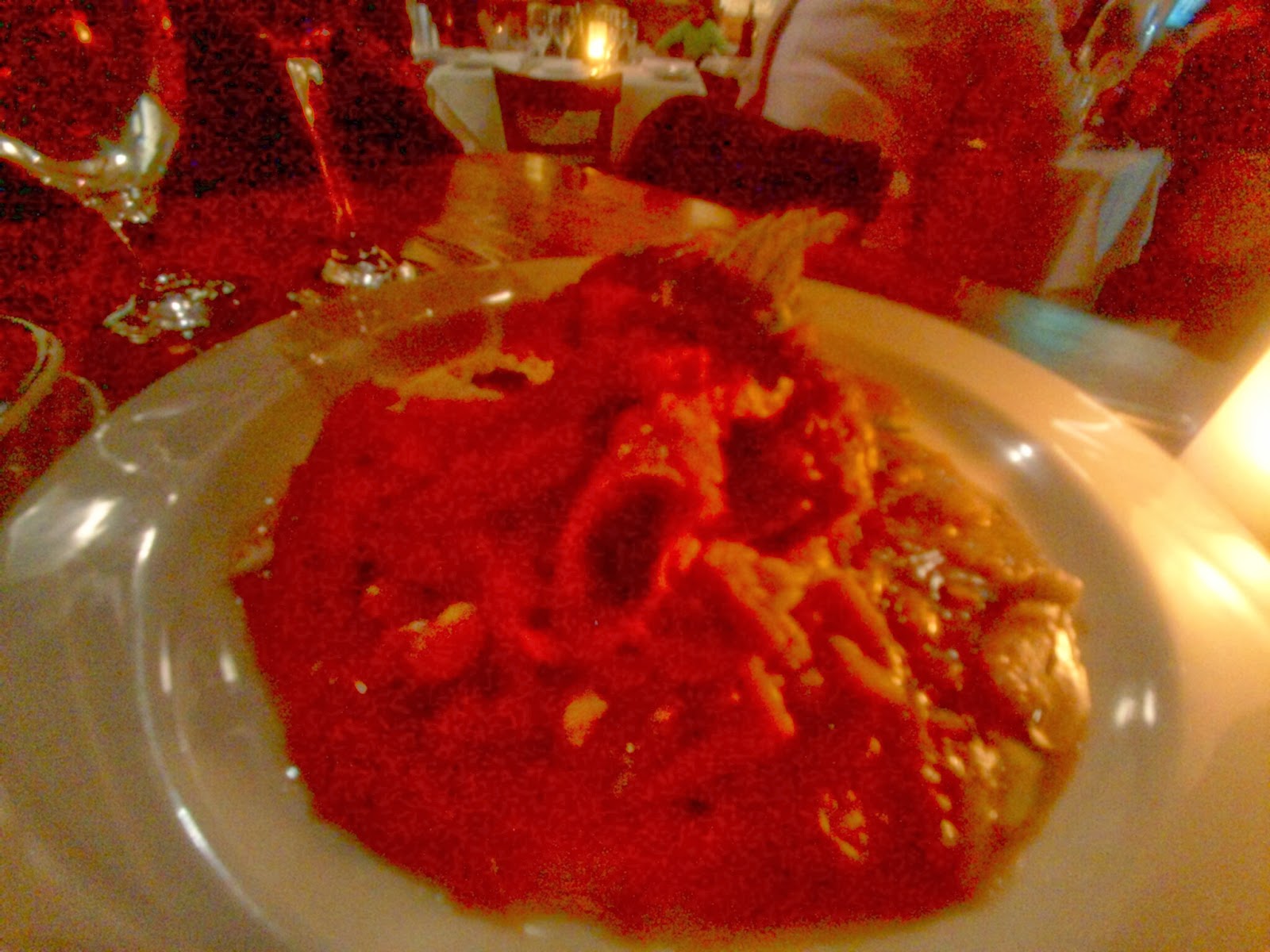 I adore lamb and I love Osso Buco (l always assumed the phrase meant “Marrow-bone,” but a friend whose opinion I highly respect corrected me: Osso Buco means “bone hole” not marrow bone. Thank you, Karen.), so when I saw on the menu an “Osso Buco d’Agnello,” I was in love. The braised lamb shank on the bone was served with a mixed vegetable, red wine and herb sauce and pillowed on a white bean and mint risotto. I was torn whether to eat it or take it home to bed with me. The tender meat fell off the bone with coaxing from a fork and the risotto only had the perfect hint of mint. The white beans added just a touch of fiber and brought the whole dish together in an erotic experience. I almost forgot the delicious wine. There were no leftovers.

How does one top a feast like that? At Gigino there is a dish called “Sirena” (the Siren) consisting of ripe strawberries dipped in fine dark chocolate and nestled in individual beds of creamed Zabaglione (whipped egg yolks and Marsala wine). Yes there is life after death and it’s beautiful. Add to that a steaming cup of espresso (double, of course) and a small snifter of Strega (an Italian liquor – the “Witch”) and I was no longer in Downtown Manhattan. I was somewhere on the Amalfi coast, possibly in Positano over-looking the Mediterranean.

I was so comfortable after my meal I forgot to ask for my traditional business card at the exit. Oh well, that means I’ll probably have to return to Gigino Trattoria. Soon, I hope.

For the Dinner and a Movie archive, click here.
Posted by Celluloid club at 7:40 AM