Recently I have been talking about “the one that got away” – the animated film that left the theaters before I could see it. Imagine my surprise when that very film appeared on network television.

Up is one of the marvelous productions from Pixar that seriously separate the animated feature from the cartoon. The differences are so obvious that even the biggest cartooniphobe (new word) could recognize them. The characters are three-dimensional and move believably as actual people and animals. There is nothing flat about it. The digital details can be seen in the movement of hairs, feathers and eyelids, and articulation of joints. This all combines to make characters not just credible but identifiable personalities.

The movie starts with an old-time newsreel in a movie theater touting the intrepid explorer and naturalist, Charles Muntz (Plummer). Muntz has just returned from South America with incredible skeletons of huge beasts and an enormous bird thought to be extinct. Upon inspection of the bones, however, scientists pooh-poohed his discovery, and he angrily vowed to take his zeppelin back to retrieve a live specimen. Little Carl Fredericksen (Leary) is in the front seat of the theater cheering his idol on while wearing an aviator’s leather cap and goggles. On his way home he hears a girl’s voice coming from an abandoned Victorian-style house and he sees the weather vane atop the roof turning in a purposeful manner. He enters and is bowled over by Elie (Docter); she is adventure personified and an extroverted tidal wave. She shows him her “Adventure Book,” turns to the page marked “Stuff I’m Going To Do,” and tells him she’s eventually going to Paradise Falls in South America. He has now become hooked and in love. 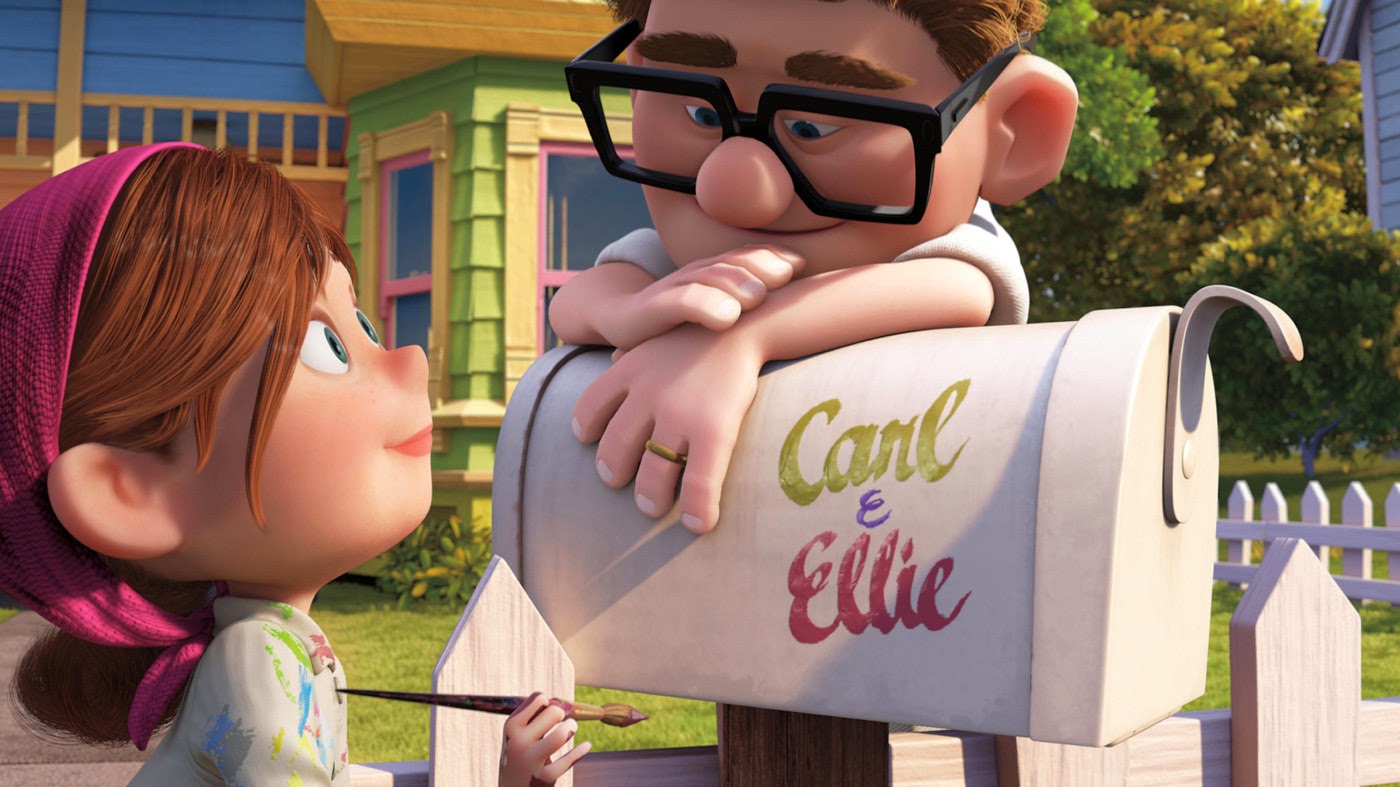 Fast-forward and we see them get married, buy and fix up the old Victorian house, save their money (from his job as a balloon salesman in the park) in a jar for their adventure, and grow old together. However, each time the money mounts up, something happens to require its use. They never make it to Paradise Falls and Elie passes away before they can. Now Carl (Asner) is elderly and alone; fighting a development company building skyscrapers all around his property. He speaks to the mailbox and the house as if Elie’s spirit inhabits them. He’s grouchy and even sends Russell (Nagai), an aspiring Junior Explorer, on a “snipe hunt” just to stop the kid from bothering him about his merit badge for helping an old person. When he clobbers a construction worker with his cane, thinking the guy was stealing his mailbox, the court sentences him to be placed in a nursing home.

The orderlies that come to pick him up don’t even notice the abundance of helium tanks littering his front lawn. As he distracts them with his suitcase and re-enters the house, the chimney blossoms into thousands of colorful helium balloons and lifts the house into the air. He’s off to South America. What he doesn’t know is that Russell was tracking the “snipe” under the house at the time and is clinging to his front porch. Grudgingly, he lets Russell in. 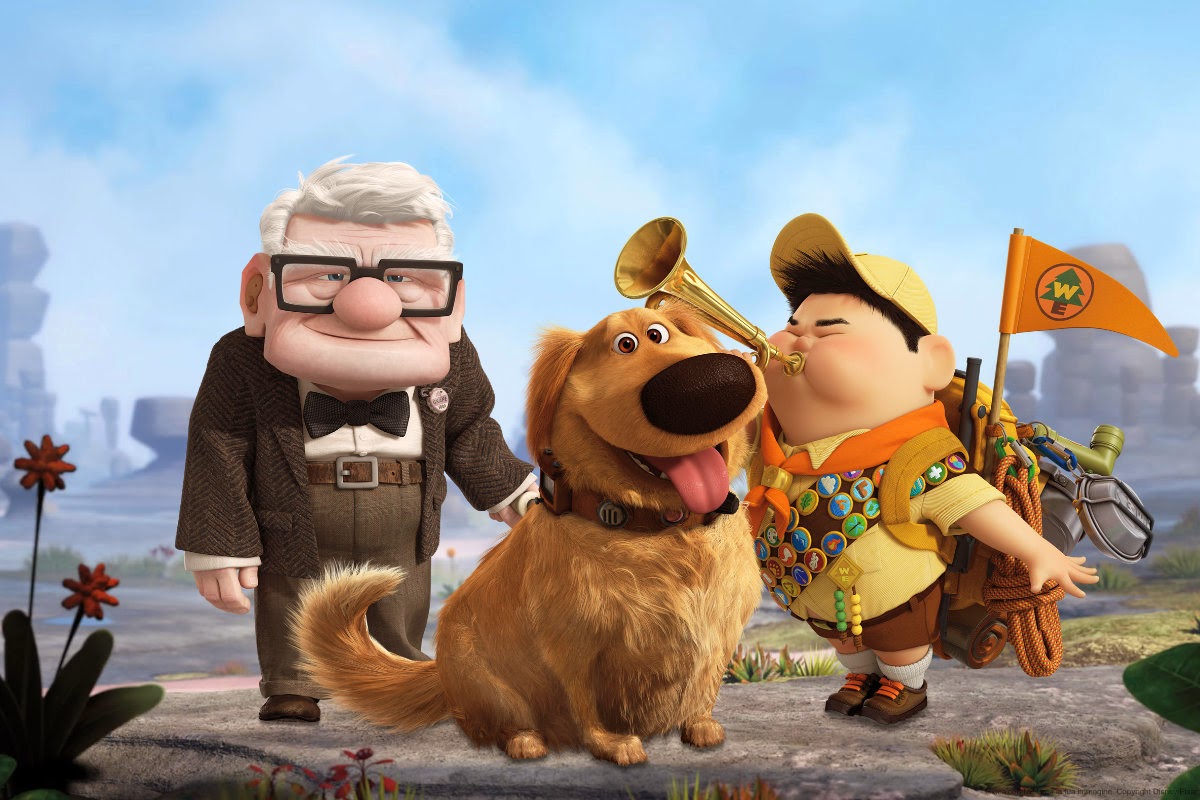 From there it’s the adventure of a lifetime, navigating a flying house to South America (Carl thinks he’s going to drop off Russell by cutting loose a number of balloons), landing only a few miles from Paradise Falls. Now they have enough to keep the house off the ground but not to fly the last few miles. They start walking, dragging the floating house. On the way they meet Dug (Peterson), a dog with a collar that allows him to talk, and the colorful giant bird, which is the object of Muntz’s search. Russell befriends it with chocolate and names it Kevin – although it turns out to be a female.

The real surprise is when they discover that Muntz is there as well his zeppelin and an army of talking dogs all trained to seek out the bird – now known as Kevin, and who has a brood of his own chicks to care for.

Up is one of those rare animated films that successfully mixes comedy, action and pathos into a blended treat that makes the viewer suspend rational reality and willingly fly into fantasy and fun. Yes, even I was surprised that Muntz was still alive when Carl was an old man (and could still handle a sword), but I too was caught up in the story, and it didn’t matter what was real or not. When Carl opens the Adventure Book for the last time and sees the “Stuff I’m Going To Do” part filled with photos of his life with Elie, I also got teary-eyed. Pixar did their usual excellent job in producing a film enjoyable by both children and adults. I’m glad I was home to see it, finally.
Posted by Celluloid club at 12:01 AM