There are good movies and there are bad movies. And then, there’s this atrocity, released direct to video for reasons that become obvious when one watches it. It seems the company that made this gem is in competition with the SyFy Channel to see who can make the worst shark movie, and, based on the terrifically cheesy graphics, I can say this one takes the cake (such as it is).

We know we’re in for a bad movie experience once we see the cast. With stalwarts such as Carmen Electra (the ex-Mrs. Dennis Rodman), Charlie O’Connell (brother of Jerry and whose career is pockmarked with other works of art on this level), and Brooke Hogan (who is every bit as good an actress and her father, Hulk, was a wrestler), all we need is a bad script and lousy direction. But wait! Included in this movie are some of the worst special effects I’ve ever seen.

As for direction, behind the camera is Christopher Ray, son of legendary Z-movie director Fred Olen Ray, and living proof that the acorn does not fall far from the tree. The screenwriter, Horton, received an MFA in Creative Writing from Naropa University’s (Colorado) Jack Kerouac School of Disembodied Poetics, whatever that means. He could have saved himself a lot of trouble if he simply took a correspondence course in screenwriting instead.

We open with a group of young people wakeboarding (a combination of water skiing and snowboarding). Soon they become a tasty meal for our title creature. Cut to a boat called The Sea King, where a group of students, led by married professors Franklin and Anne Babish (Carmen and Charlie), are studying marine biology. Electra as a marine biologist. Now this is science fiction. From the dialogue she spouts in the movie one would surmise that Carmen thinks marine biology is studying the private parts of Marines. Not to worry, for this collection of students is even more brain dead than she.

The gang is cruising along merrily; Jerry points out the local sights in the ocean and the girls and guys relax on deck, showing off their abs and silicone. Suddenly, Anne, driving the ship, hits an object in the water. Professor Jerry spots it as a Megamouth shark. Wait a minute, he tells the students, Megamouths are deep-water sharks. Not only that, he’s also dead. This is an attempt, and a poor one, at creating some sort of early tension. They try to bring the shark carcass on board, but it drifts back and is sucked into the boat’s propeller, damaging the hull and causing the boat to take on water. (Things happen fast in a Z-movie.) This is where the cheesy special effects come into play. We do not actually see the shark torn apart, but rather something akin to a shadow cutout of a shark in front of the propeller and a lot of red water gushing forth. 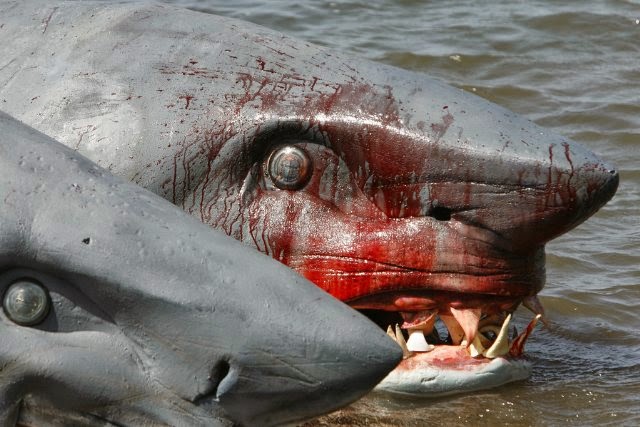 Jerry ponders why all this is happening. Suddenly, our two-headed hero appears and attacks the boat as well, conveniently breaking the ship’s radio antenna. Co-captain Laura (Thompson) is prevented from summoning help. The group then spots a deserted atoll nearby, so Laura and Anne pilot the boat close enough to the shore as to allow Franklin to take the student to the atoll via a dinghy while Anne and Laura remain on the Sea King, along with the ships crew, Han (Webb) and Dikilla (Valentin).

While the Prof and the gang explore the atoll, looking for scrap metal with which to repair the hull, Laura enters the water to see if she can make repairs. This gives the shark an instant meal and a taste for silicone. Now, for reasons known only to the writer and director, three of the students decide to take a break and go skinny-dipping, giving our shark even more of a meal. Meanwhile, the group finds and repairs two small speedboats as an earthquake strikes the atoll, injuring the Prof, who is brought back to the Sea King by students who are later devoured.

After a few more students are eaten, Anne, the Prof and the crew leave the Sea King for the atoll. Suddenly, another earthquake hits, and Anne and the Prof begin to suspect that the island is collapsing on itself. What a plot device. In the meantime, Kate (Hogan) and Cole (Ward) return to the Sea King and fix the hull. Cole, a thoroughly disreputable sort, drives off in the Sea King, forcing Kate to swim back to the atoll. The two-headed shark attacks the Sea King and sinks it, causing it to send an automatic distress signal. Cole attempts to escape in a lifeboat, but the ringing of his cell phone attracts the shark, and exit Cole. Helping the atoll to rapidly sink is our shark, who is eating the atoll from below. The Prof and Anne then spot a small tsunami coming (What else?), which overtakes the atoll and leaves the Prof and Anne as a meal for the hungry fish. After all, he has two mouths to feed. 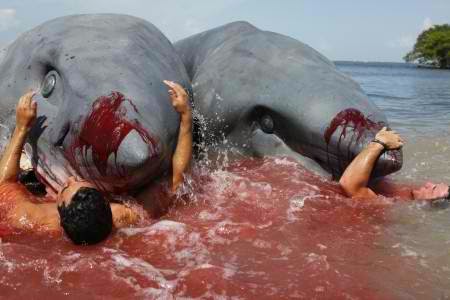 The survivors flee on the shrinking atoll to an abandoned hut, but the shark breaks in and devours another four. Now only three are left: Kate (Hogan), the nerdish Paul (Gallegos) and Kirsten (Bissing). By using a gasoline tank they found earlier, they manage to blow their visitor to kingdom come, but not before losing Kirsten. A helicopter rescues Kate and Paul, the only survivors in a group of 23 people, as the movie mercifully ends.

The only reason for a bad movie fanatic to want to see this is for camp value, but there’s precious little of that. Simply stated, it’s a movie that’s so bad, it’s bad. I’ve seen better special effects made with an Etch A Sketch; although most of the cast is devoured, it’s done in the same fashion as when the Megamouth hit the propeller. We never actually see the shark eat anyone. All we do see is their bodies in front of the shark, accompanied by a lot of blood fogging the water, and later perhaps a totally unconvincing hand or a leg. As for the shark, it’s predictably ridiculous, and seems to increase and decrease in size during the movie: one minute, the cast is being attacked in shallow water, while later they are safe because they are in shallow water. At one point the shark is big enough to smash against and sink the atoll, while in the next scene he’s small enough to fit in the tiny hut along with the surviving students.

As for the plot, it has more holes than a wheel of Swiss cheese. Students wander off and on, doing the dumbest things. The writers seem to have collected every obvious plot device and even a few more that defy logic. For instance, at the end, the gasoline bomb has a wet t-shirt for a fuse and Kate manages to light it anyway. Earlier, a crowd is standing in the water wondering what to do. “Why not climb the rocks behind you?” I say to myself. After all, even this shark cannot climb rocks. But no, they decide to swim for it instead. If your idea of dialogue is “Wait a minute! What was that?” or “Hurry up! Go, go, go!” then this is the movie for you.

2-Headed Shark Attack is meant for those who are either bad movie connoisseurs, or bored teenagers looking for something – anything – to watch. Otherwise, pass this one by. Any movie where the best performance comes from Brooke Hogan is a movie worth missing.
Posted by Celluloid club at 6:41 AM