In my younger years I traveled much to Europe and Mexico and many cities in the U.S. (mostly thanks to the Barbershop Harmony Society). Yes, for 30-some-odd years I sang with barbershop choruses and in 15 different barbershop quartets. I continued that until rehearsals became more work than fun. I guess age does that. Also, my fear of flying grew rather than abated and now you couldn’t get me on a plane unless you drugged me. Thank goodness someone invented the word “stay-cation.” I’ve had a few in my later years. Allow me to explain. I live in Queens, a borough of the “City that Never Sleeps.” For one week a year I check into a hotel in Manhattan (Midtown preferably) and I make it my base of operations for sightseeing for the whole week. A “stay-cation” is a vacation in which you never really “leave town.” Granted, my “town” is a large one. But I have not run out of sights to see or things to discover.

In my travels I have developed my own opinions and standards, like my movie ratings. People have questioned why I rate a film higher than my reviews appear to sound. They’re really not. I’ll try to make this clear. My symbol is the martini glass, my favorite cocktail, and I rate films from one to five. They stand for these qualities: 1. The title and the trailers make me want to see the movie. 2. The visual photography, soundtrack and special effects are attractive. 3. The storyline and writing is clever and with minimum vulgarity (unless needed for the plot). 4. The acting and cast is so good as to make the characters believable. 5. I am so drawn into the film that I identify with a character. Of course there are half gradations when necessary. Can any film receive less than one martini glass? That will only be possible when I am not the one choosing what film I see (and paying for it).

I hope this helps. Friday I was drawn by an actor I fondly call “The Modern Man of a Thousand Faces” and a restaurant whose location holds memories. Enjoy!

“The Internet was created to make the world smaller. Now it seems the world is smaller without it.” Thus ruminates Max Waters (Bettany) as he stares at a sunflower in a garden created by his friends Will and Evelyn. Then the film whisks us five years into the past.

Dr. Will Caster (Depp) is a genius who wants to create an Artificial Intelligence with full emotional feelings and a comprehensive knowledge of literally everything and he has had some success uploading the consciousness of a monkey. Evelyn, (Hall) his wife and biggest supporter, has her own dream of saving the world, eliminating hunger and disease and protecting the environment. Unfortunately there is an organization called RIFT (Revolutionary Independence From Technology) dead set against any computer becoming sentient (and especially all-powerful) and, led by Bree (Mara) performs terrorist attacks on Caster and his organization, including shooting him with a bullet laced with radioactive elements which are killing him from inside. Evelyn realizes that RIFT is going to attack their main laboratory and swipes a few of the “cores” from the prototype computer PINN (Physically Integrated Neural Network) and with Max, sets up a safe, secret laboratory to continue Will’s work. When she realizes he’s beyond saving and his knowledge will be lost, she convinces Max to help her upload Will’s consciousness into the computer. Secretly hoping they will fail, Max is astonished and horrified when they succeed.

Max’s premonitions about absolute power corrupting absolutely are realized when Will uses the capability of PINN and the Internet to go global and extend his reach, money-making capacity, and technological evolution to a point where he becomes God-like. Evelyn stays with him until he starts curing poor people of any and all illnesses and infirmities only to incorporate them into his mind and have them become subservient to him. His nano-technology becomes a kind of instantaneous creation power, rebuilding anything that is destroyed and repairing any injury suffered by his people.

Freeman plays FBI Agent Joseph Tagger who recognizes both the good that Will is doing and the potential evil that such power can generate. With Max (who has now turned against his friends and joined RIFT) they calculate that only a virus uploaded into Will’s system will stop him. Not only that, Evelyn is the only way to transmit the virus and she won’t survive the process. But wait, there’s more. When the virus is successfully uploaded it will cause a global blackout and totally destroy the Internet. 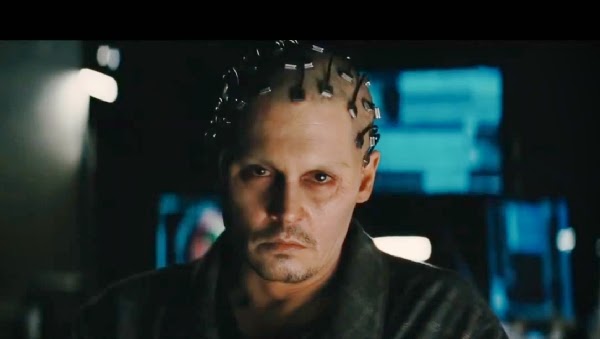 Transcendence had possibilities of being a great movie but unfortunately it will join the ranks of other potentially global computer disaster movies like Colossus (1970), War Games (1983), and the slightly less global Demon Seed (1977). The film takes 50 minutes of its hour-and-59-minute length before it takes off into fantasy depending heavily on the excellent musical soundtrack. Depp is almost as moody broody and mirthless as Edward Scissorhands, which he does well and it prefaces his incorporation into a computer nicely, but it detracts from the believability of his character. Freeman is stock Morgan Freeman, a great actor but been there, done that.

This movie is all about Evelyn and Rebecca Hall and does a superb job of displaying the love and devotion for Will, and later the shock and horror in what “they” created. Evelyn is the only character with a hint of reality. The storyline is good but the conflict is lame. The only reason RIFT has for their existence is that A.I. is an abomination. Seriously? The special effects are wonderful and used judiciously throughout the movie, especially the last scene where we rejoin Max and the sunflower in the garden. There are scenes of gun violence and bloodshed so parents, be aware. This is not a kiddie film. I for one have enjoyed Depp much more in his previous films and hope has better scripts coming.

Rating: 3 out of 5 Martini glasses. 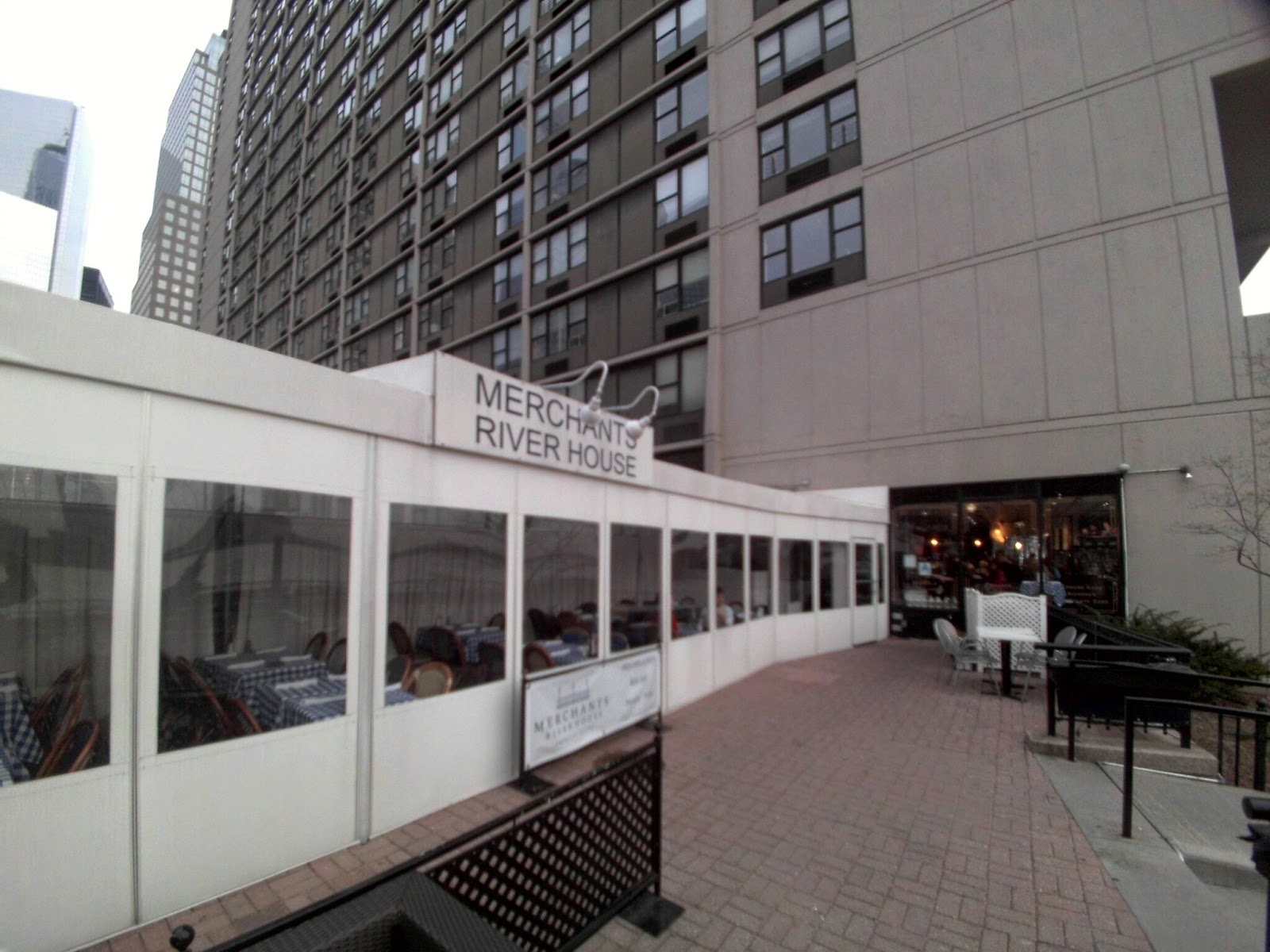 Four years ago, Steamers Landing occupied the prime real estate now occupied by Merchants River House. The elongated space starts with an informal covered porch dining area leading to the bar in the middle, the dining area attached to the bar and last, the outdoor café section in the garden. It is almost impossible not to get a window view of the majestic Hudson River as it empties into New York Harbor and the impressive skyline of Jersey City as the sun sets behind it. 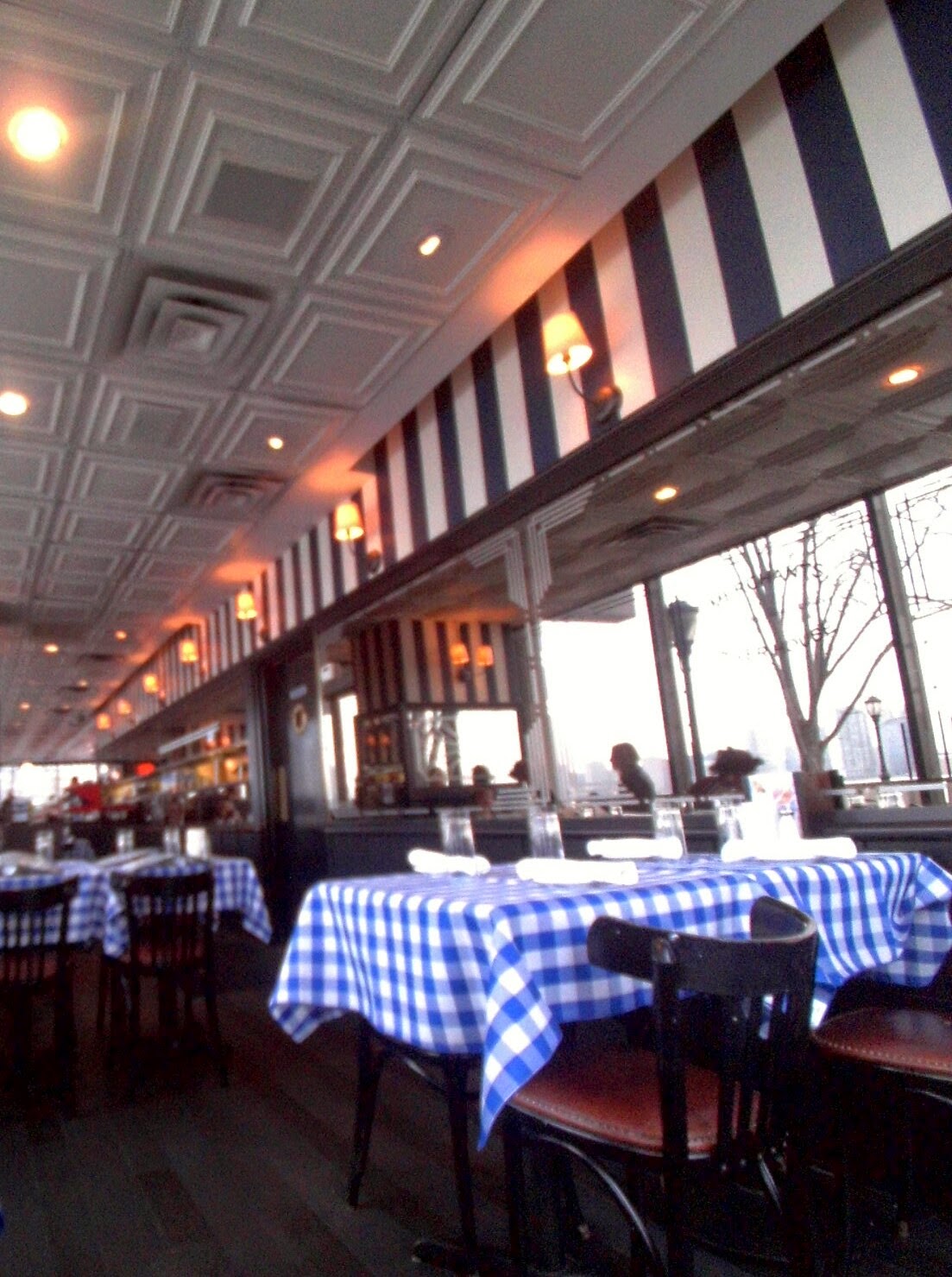 I entered through the door to the bar and met the girls at the first of two (yes, two) Captains Stations. They directed me to the second just past the bar. I was seated at the last table in the rear facing the window with my back to the restrooms – and the rear door from the garden. It was comfortable until the Battery Park City resident diners arrived and I had cold and hot flashes as the door periodically opened and closed. The blue and white checked tablecloths gave the place a homey look under the small shaded sconces and faux tin ceiling. Real candles would have been a nice touch but someone must have a monopoly on selling battery operated electric candles.

My server Skip and his attendant trainee Katie took my water preference and brought me a bottle and the menu. The menu is organized in three columns – Soups and Salads, Burgers and Sandwiches on the left, Entrées, Sides and Desserts on the right, and Starters in the center under the title. The reverse side shows the beverages, cocktails, beer and wine lists. I had my eye on the Blue River Martini – made with Zyr vodka and bleu cheese stuffed olives – but Skip told me they didn’t have the olives and couldn’t make that drink. Strike one. My back-up choice was the Mystic Malbec Martini – Primo Malbec wine floating on a blend of key lime juice and Malbec – and at first Skip told me that drink could not be made either because of lack of Key limes. But when he checked with the bartender he found that it was untrue and I ordered the drink. It was an amazing drink with the burgundy-colored wine capping the cloudy white tart lime mixture.

Katie arrived halfway through the cocktail to take my dinner order. I asked her how large the salads were and she gave me an indeterminate answer so I decided against them. Then I asked about soups. “Buffalo Chicken and Beef Barley;” Neither of which I could have on Good Friday. Strike two. 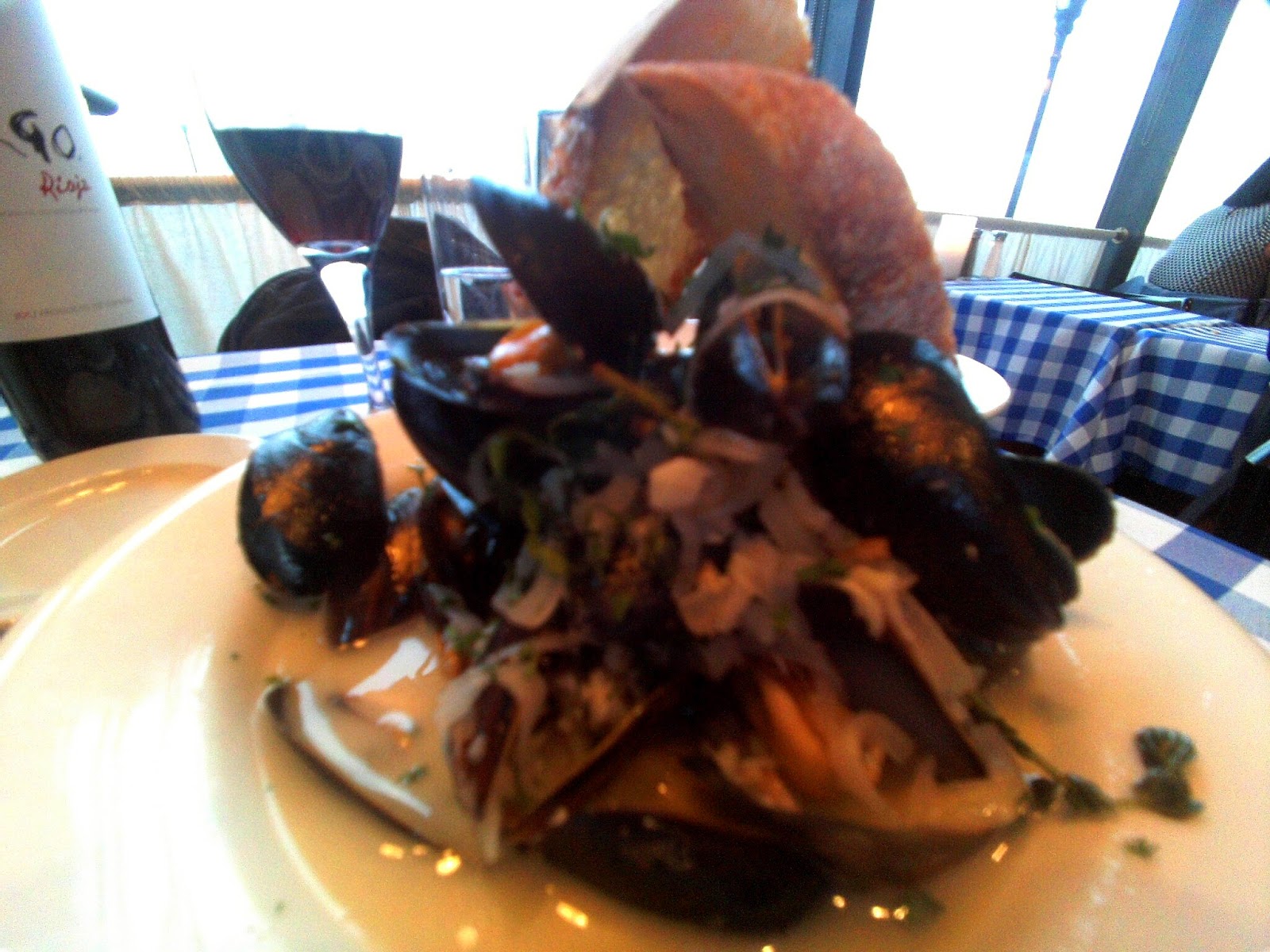 I returned to the menu and chose a starter, the Pan Steamed Prince Edward Island Mussels – made with shaved garlic, flat-leafed parsley, thyme and red pepper flakes in a creamery butter and chardonnay sauce. It was served in a heaping bowl steamy hot and fragrant. When I removed the tender mussels from their shells it made a pleasing soup that I finished to the last drop with the crusty baguette slices that came with it.

Prior experiences with striped bass had me eager to try the dish from the time I first saw it on the website. I ordered the Pan Seared Striped Bass – over a bed of Ratatouille, potato cubes and spinach in a horseradish/mustard sauce. 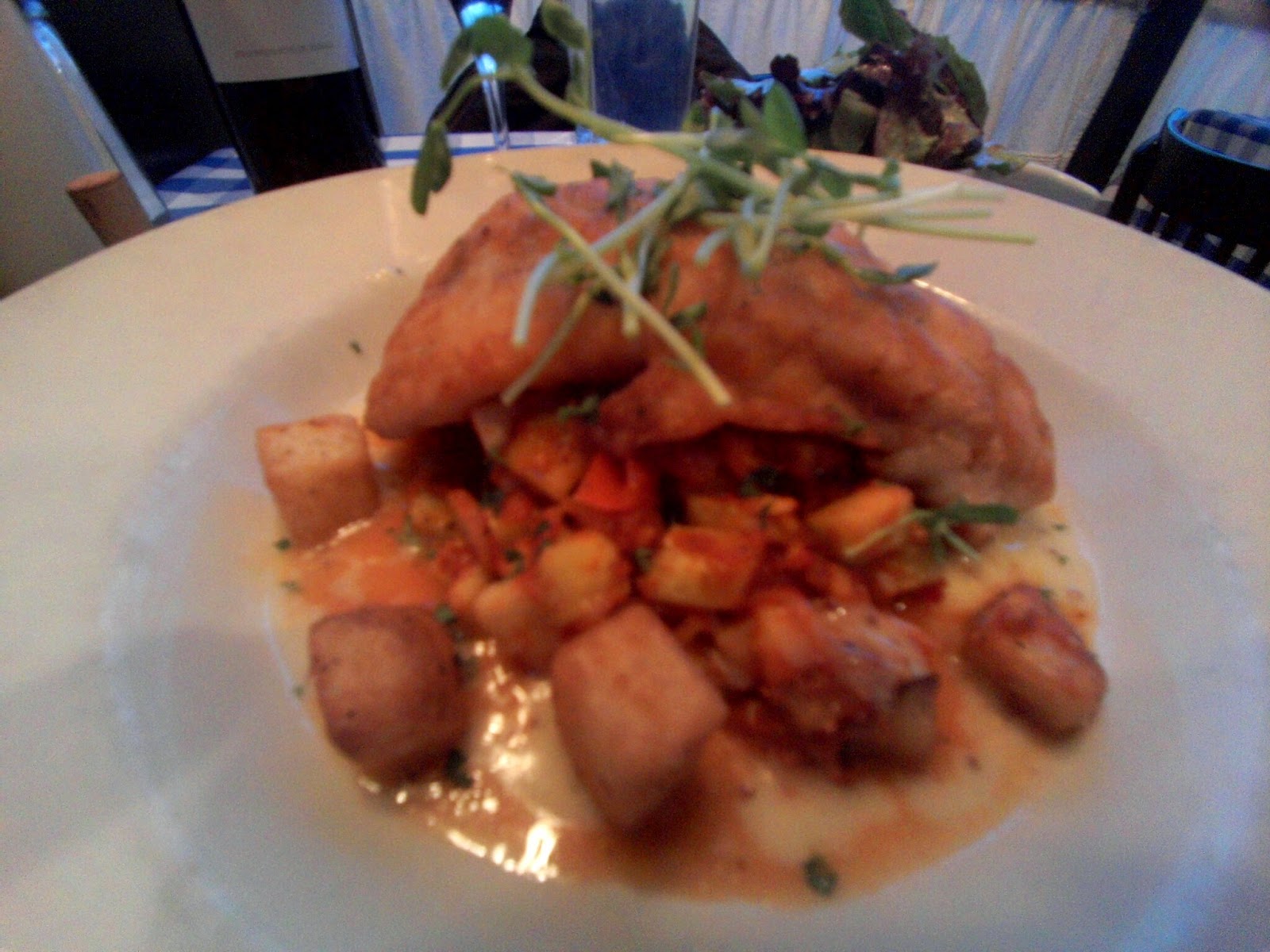 Unfortunately, my prior experiences did not prepare me for the lackluster flavor of this dish. Was there horseradish or mustard? My tongue didn’t tingle the slightest bit. The fish was well cooked and flaky but the bread coating was flavorless. The spinach was the best part of the dish. Even the ratatouille was uninspiring. Strike three. It was a good thing the 2011 Ergo Tempranillo from Rioja, Spain, was excellent and kept the meal exciting.

At dessert time, I didn’t know what was going to happen. I was hoping I didn’t have to tell Skip to skip it or not. When Katie floated by I ordered the Chocolate Mousse Pie. “Do you want ice cream with that?” “Yes please.” And so it was: A smooth chocolate-y slice of pie accompanied by a ball of gooey homemade vanilla ice cream (later I learned it was a $2.50 ball of ice cream). But it was delicious. Skip arrived soon after asking if there was anything else I wanted. I suggested an after-dinner drink but he said they only have a “house brandy.” That was fine with me and I told him. A few minutes later, Katie came to my table with the check. Hmm. I waited an appropriate amount of time until Skip came back. I handed him my payment with the question, “Out of the ‘house brandy?'” He looked taken aback and offered to bring it but I demurred. Is there such a thing as “strike four?”

Being an impulsive eavesdropper I had heard over the course of my dinner several other people at other tables ordering the same martini that they were out of when I came and getting the same answer. It made me wonder why if the drink was so popular. Did not four years of experience teach them? When Helene and I sat at nearly the same table years ago we had a wonderful time at Steamers Landing. I will remember that.


For the Dinner and a Movie archive, click here.
Posted by Celluloid club at 6:53 AM