Gigantic to Tiny – Let’s Get Small


Last weekend I was glad to receive my new rose bushes, dahlias and seeds for this year’s planting because 14 of my dahlias were ready to plant Saturday. I got them in at just the right time. The roses too, because the rains were well timed with the planting this week. On Wednesday I spent a delightful evening under the big blue and yellow tent of Cirque Du Soleil’s Amaluna. What a great show! I was able to get a second row seat so nothing about the performance was lost to me. I even wrote about it for Celluloid Club, so look for it. This coming week I’m eagerly anticipating a reunion of my quartet “The Majestics” on Friday so I’ll have to move my movie night to Thursday. The week after is planting week and I’m off from work, yay! As for this past Friday, well it was as Arte Johnson once said in Laugh-In, “Verrry Interesting.” Enjoy!

It was 60 years ago when the creature named Gojira (combining the Japanese words for “bull” and “whale”) first stomped and trumpeted his way across the silver screen. Since Americans could not speak Japanese, the name “Godzilla” was adopted and Raymond Burr inserted into the cast so that Americans would watch a Japanese movie about the horrors that nuclear power (particularly the atomic bomb) could unleash on the world. In 1957 or 8 (I forget, I was pretty young then) the movie came to television on Million Dollar Movie (New York’s channel 9) and I was allowed to watch it. I was terrified, trembling from behind a living room chair and ducking back behind it each time the monster’s face came on screen. I even had dreams of Godzilla destroying the Ditmars elevated station from which I knew my Dad needed to come home from work.

That was then, and this is now. After several movies and sequels in which a man in a rubber suit battled various improbable monsters (including a mechanical version of himself) and became a kind of hero along the way, we saw him suddenly become a mother in 1998 and were truly horrified at the lengths to which the film industry would go. This year they took a step backward and examined the original character. They even consulted the Japanese movie industry. To create the creature entirely in computer graphics they built upon the original model, trying not to make him look too round (hinting at the guy inside the rubber suit); giving him longer, muscular arms and a tail that, miraculously, did not drag on the ground and did not bend like cardboard when it hit something. As a bow to the Japanese creation the spinal ridge plates were retained and made fearsome, lighting up when Godzilla uses his radioactive breath.

But we have to wait for over an hour for him to be fully visible while we slog through the lame back-story. Joe and Sandra Brody (Cranston and Binoche) work at a nuclear power facility called Janjira in Japan. The place has been plagued by EMPs (Electro-Magnetic Pulses) that register high on the Richter scale and Joe wants to shut down the plant before a major accident happens. That something does happen and Sandra is killed in the smoke and resulting light show while Joe can only watch helplessly through steel doors. Their son Ford (Adams) watches from his school window as one by one the cooling towers crumble and fall to the ground.

Zap! It’s 15 years later and Ford (Taylor-Johnson) is married to Elle (Olsen) and has his own son, Sam (Bolde), and they’re living in San Francisco. All is well until Ford is forced to fly to Japan to bail his father out of jail (a major embarrassment to him). Joe has been arrested for entering the Contamination Zone in the area surrounding the fated power plant. Joe convinces Ford to accompany him there once more and they learn that not only is the zone not irradiated, the air is fresh enough to breathe. He manages to find his data diskettes at their former home and they see lights on at the power plant site when whoops! They’re both arrested, but instead of going to jail, they’re brought to the site. Here they meet Dr. Ichiro Serizawa (Watanabe) and his assistant Vivienne Graham (Hawkins), who need the data on his diskettes to make sense of what is creating the EMPs still emanating from the site. 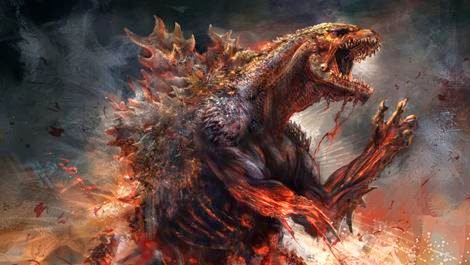 Now the granddaddy of all sinkholes opens up in the middle of the site and when the scientists investigate, they discover an enormous “pod” next to a similar one that appears broken open and is empty. So what do they do? Destroy it? No, they give it power to see what will happen. Then, when the pulses threaten to destroy the facility they finally shut down the power and surprise! Out comes a gargantuan winged insectoid creature with the facial features of a hood ornament from 1949 Cadillac with jaws. It wreaks havoc and flies off. That’s when Joe should have said, “I told you so.”

Making a long story short, another pod had been taken by the Americans to a location in Nevada where nuclear waste is stored. Great idea! It hatched and is twice the size of the first one, it’s a female, and pregnant and hungry for more nuclear food. Now, where would that be? Why, San Francisco, of course! Both creatures are heading for Hyde Street while, unknown to them the “Alpha Predator,” aka Godzilla, has fully awakened from his vacation in the Philippines and is following them there. That’s where the fight begins.

With the exception of Cranston, the original Japanese cast brightly eclipses the acting in this film. Godzilla himself is fantastically created even though they refused to give him his characteristic “voice-roar.” Whether models were used or the buildings were also CGI, the effects were credible. The soundtrack did not interfere and was generally unnoticeable until the final battle scenes where, in order to avoid the electro-magnetic pulses from the M.U.T.O.s (that’s what they eventually called them, Massive Unidentified Terrestrial Organisms) a troop of soldiers, including Ford, skydive into the downtown area of San Francisco to retrieve an armed nuclear warhead before they can eat it. As they plummet from the sky trailing red smoke from the heels of their boots we hear the “Kyrie” from Gyögy Ligeti’s “Requiem.” (Why? I guess for dramatic effect.) We remember it as the choral piece played in 2001: A Space Odyssey (1968) whenever the monolith appeared. Beautiful as it is, I considered that to be unoriginal. At two hours and three minutes the film is a little too long and before it got moving I had shifted in my chair three times. Parents, if your kids love dinosaurs and laugh at obviously phony monsters (but not Godzilla), bring them to this one. There is minimal bloodshed, no sex and no harsh language. Dr. Serizawa sums the film up perfectly in his line, “The arrogance of man is that he thinks he has nature under control…” Didn’t they say something similar in 1954?

Rating: 2½ out off 5 Martini glasses. 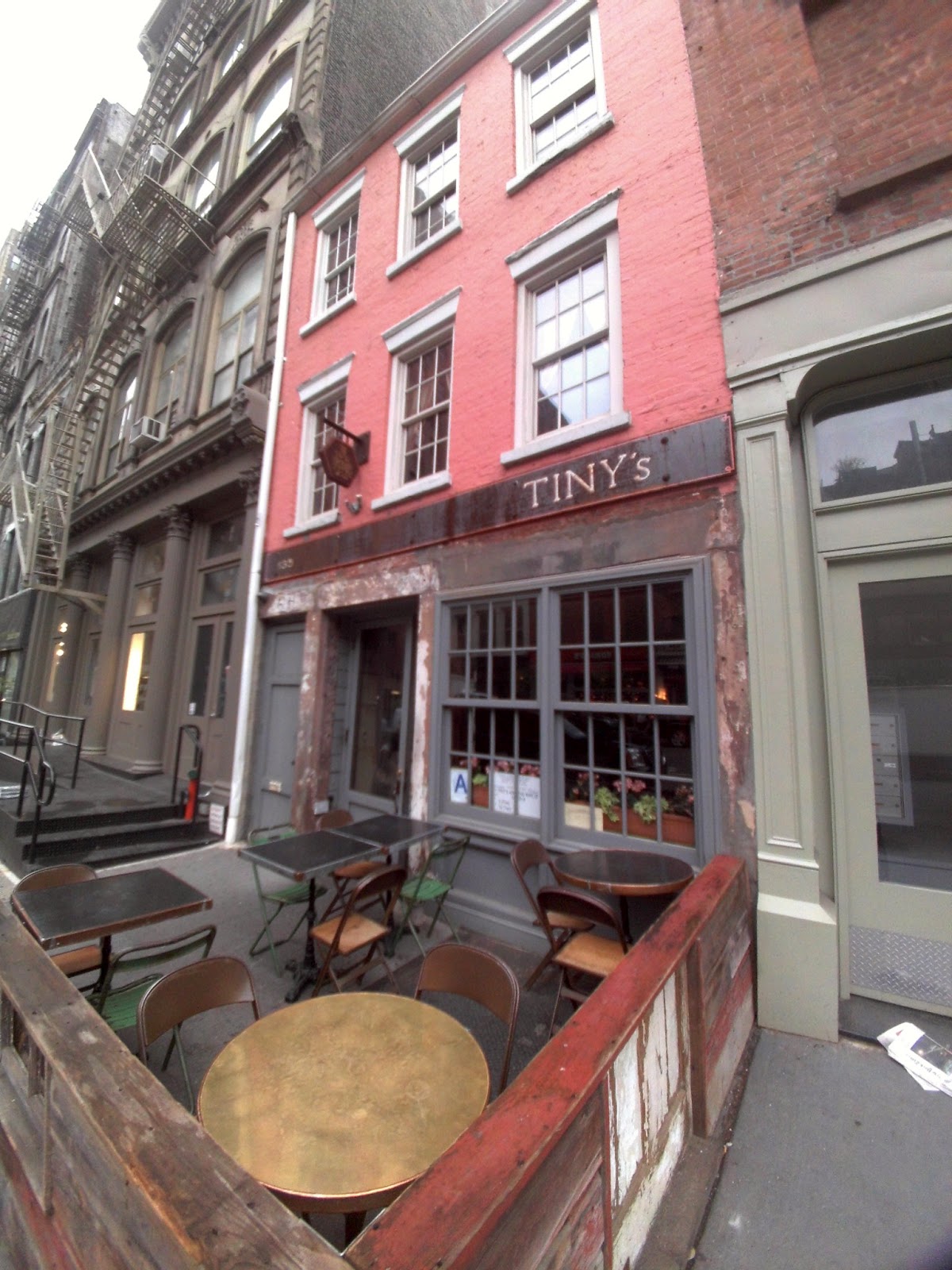 Knowing that it would be a rainy night I prepared well. I had my umbrella, a brand new hooded jacket I could use as rain gear and, to avoid a blurry photo, I took the picture of the restaurant exterior before I arrived at my office. This worked well because the bulk of the downpour occurred after I got home.

Tiny’s is located in a tiny (appropriately), 100-year-old-plus (built in 1810), three-story brownstone painted rose pink. It looks even smaller considering the height of the two buildings flanking it. When I first saw its Alice in Wonderland proportions I wondered if I would fit inside. The petite, almost doll-like, young lady at the Captain’s Station greeted me and suggested the corner window seat. Perfect. I wanted to see when the rains would come. The décor is basically antique everything from the original tin ceilings to the hand-made tiles on the floor. The walls are painted antique white when not paneled by some venerable woodwork and are decked with tchotchkes from the past, with the exception of the photo of the rock group Blondie near the Captain’s Station. 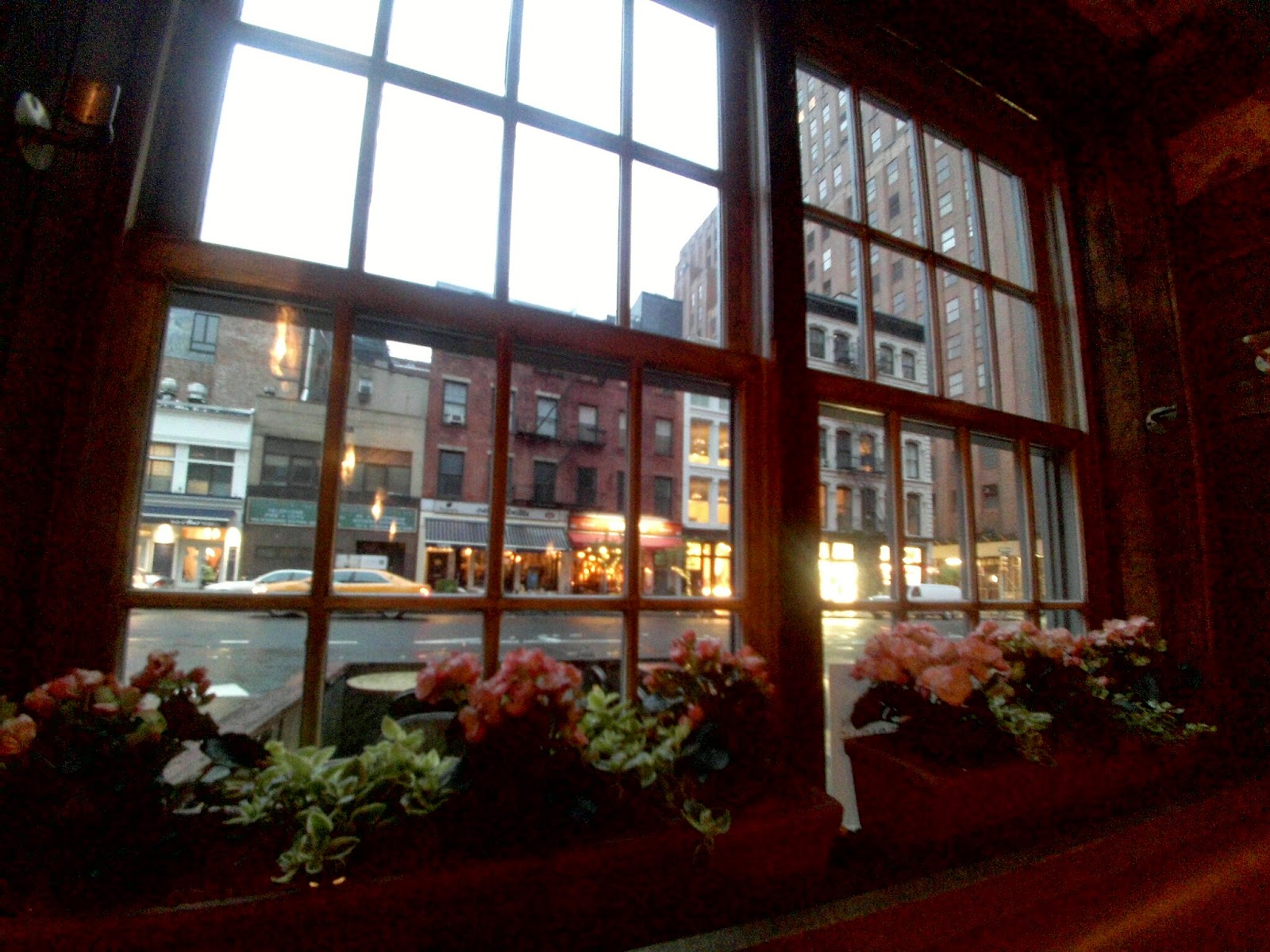 My waiter Andy asked if tap water was OK and, upon my approval poured a glass and presented me with the cocktail and wine list and the menu. Shortly after he asked if I wanted a drink and I couldn’t pass up a cocktail with the name “Corpse Reviver” – Gin, Absinthe, Orange Liqueur, Lillet and Lemon – served in an old-fashioned Champagne glass. Very interesting, but one was sufficient. The dinner menu is straightforward and lists Starters, Mains, Sides and Desserts. After conferring with Andy I easily had a three-course dinner chosen and asked for the wine list again (he removed it after the cocktail was ordered). Another server brought the three-slice bread dish and butter. I couldn’t believe it, two good breads in one week (I waxed poetic over the bread in Tre Sorrelle on Wednesday).

I chose the 2010 Chateau La Graula Bordeaux, a varietal combining Cabernet and Merlot grapes for a steady, smooth flavored yet fruity wine. It proved more than a match for my meal. I was little taken aback when my appetizer and salad arrived together but then I realized that neither one was a hot dish and settled in. 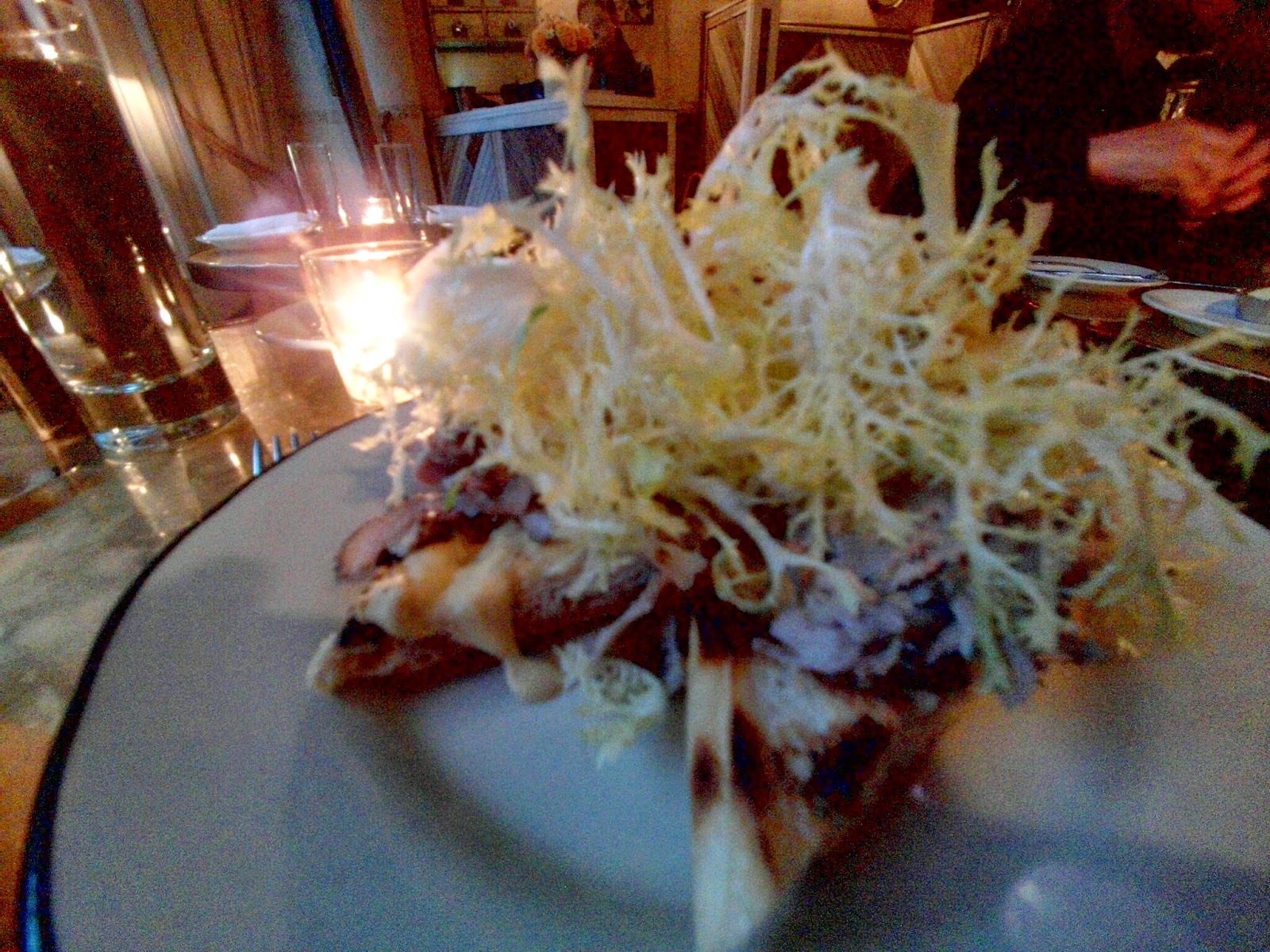 The appetizer was called Duck Pastrami Tartine and the shredded tender duck meat was strewn on thickly sliced grilled Dijon baguette smeared with whole grain mustard and almost buried under fresh frisée (spidery, yellowish-white greens). The duck was sweet and the mustard bitingly tart for a very French, delightful starter. The salad was a Kale Salad featuring incredibly fresh dark-green kale, walnuts, local apples, and carrots in a Maple-Mustard Vinaigrette and topped with shredded Gouda cheese. It was a large bowl but I paced myself and with sips from the wine glass and it and the appetizer soon disappeared. 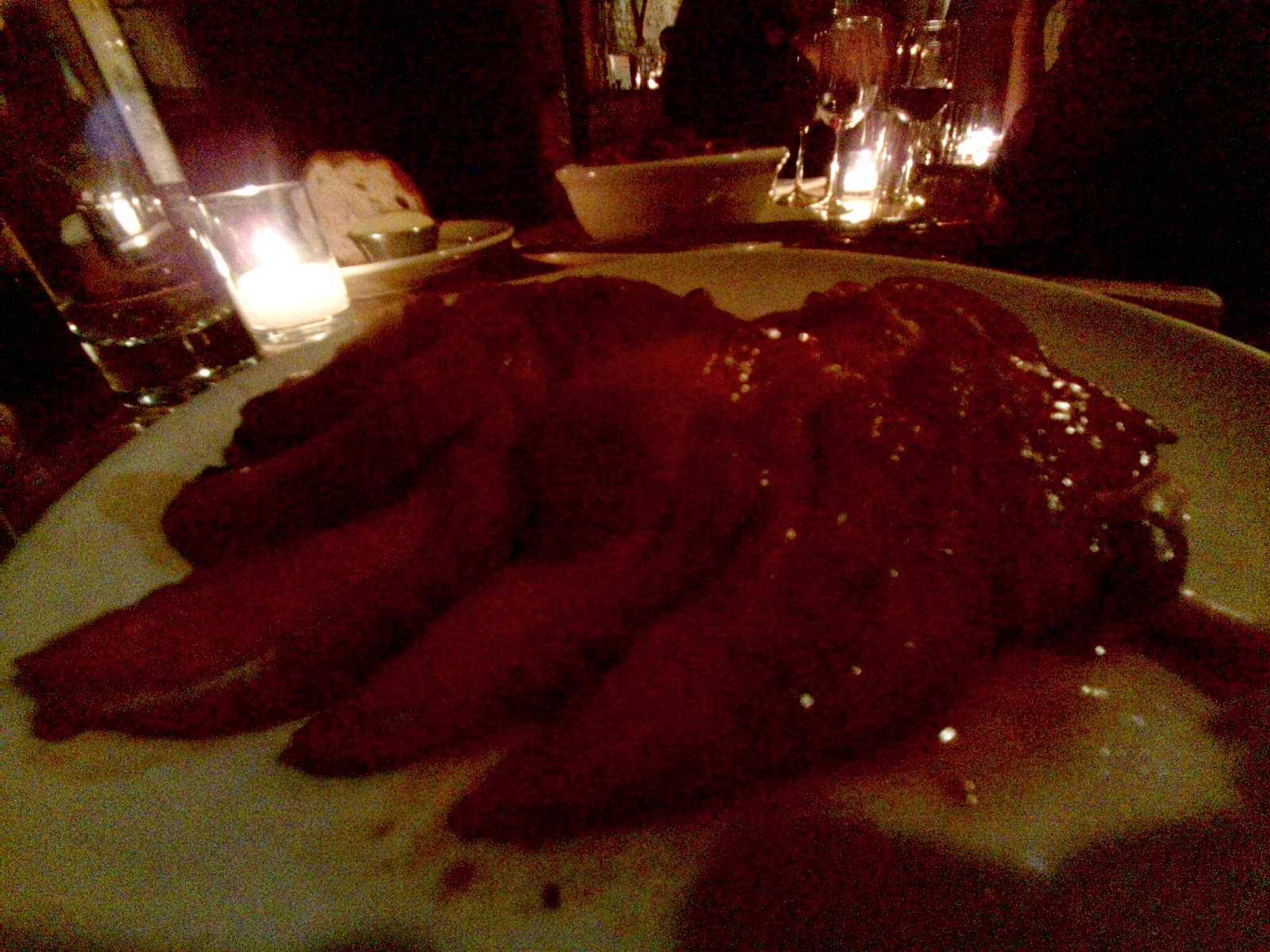 The most interesting main dish was also one centered on duck. It was called the Duck Duo – a smoked breast and leg of duck confit, with haricots verts (young green beans), toasted almonds, and Hon Shimeji mushrooms in a natural jus. I sided this with Balsamic red cabbage, shredded with dried cherries and pistachios. Slices of tender, juicy duck breast were fanned out from the golden brown, crispy duck leg with the crunchy fresh beans. It was wonderful and I felt like I was in a fine French bistro, at my circular, copper-trimmed zinc-topped table, with potted pink begonias lining the window to the street.

Before I finished the main course Chef Paul Nanez dropped by my table, and I told him how good everything was. He said, “I like the way you order.” I thanked him. When Andy returned I told him I was finished and that the side dish could have used some cinnamon and more cherries and pistachios to make it more interesting. He presented the dessert list and I chose the Tres Leches Cake, a fluffy milk and cheese-based confection topped with Mixed Berry and Passion Fruit compote that was easy to finish. Then after a Truffle-Shuffle after dinner drink – a caramel/cocoa swirled cream cocktail – I was ready to face the elements (it was still not raining too hard, thank goodness).

For those who like to classify restaurants Chef Nanez calls his preparations Modern American cuisine with French and Italian influences. Well, I can certainly vouch for the French part. Andy recommended going upstairs to see the bar but I thought I would do that next time. Tiny’s is charming and cozy and near enough to the office for a lunch visit.

For the Dinner and a Movie archive, click here.
Posted by Celluloid club at 12:40 AM