From Tre Sorrelle to Amaluna

When you have an eight o’clock curtain in Flushing and you work in downtown Manhattan it’s a good idea to have dinner first. Fortunately for me there is a restaurant a half a block away from my office where I have not previously dined. Right next door to Maxwell’s (which was once Spaghetti Western) is Tre Sorrelle (Three Sisters – correctly spelled with only one “r” - Sorelle).

On the large glass windows the stencils read Wood Fired Pizza, Bar and Restaurant. You can see the simple tables lining the walls on either side of the bar with the imposing brick pizza oven front and center. On entering you notice the four-foot walnut wood paneling next to the tables as the open brick walls rise 20 feet to the tin ceiling.

At 4:45 on a Wednesday I had my choice of tables and I found a cozy one near the pizza oven but not near enough to feel the heat and I sat in the chair facing the windows. A recording of a live Bee Gees concert was playing through the speakers as Miguel brought a glass of water and the menu. I ordered a martini and Miguel set off to make it.

The menu is impressive in its selection of 16 appetizers, 18 pastas, 19 Entrees, 8 salads, 2 soups, 6 sides and 11 pizzas and 4 preparations of Panini. There are also wraps, burgers and sandwiches. When three young women arrived later with around five or six children, I understood why these items were on the menu.

My martini was well chilled and made exactly as I requested. Since it was not my usual dinner hour I was not as hungry and I asked Miguel if they do half orders on the pasta, to which he shrugged and indicated probably not. No matter. I told him I love pasta and he suggested making the side dish with my main course pasta rather than vegetables. Great idea! I ordered a bowl of the Minestrone Soup, the daily special and the Vitello Gorgonzola with pasta. “Same sauce, or tomato?” “Same sauce.”
Miguel was off on his errand.

Another server brought the breadbasket with a tall, slender carafe of olive oil and a small dish of pre-packaged butter. The fresh baguette didn’t need either the oil or the butter and tasted fabulous alone. But I gilded the lily anyway and it was wonderful either way. I had to ask where they got it. Miguel wrote down Parisi Bakery’s address at 198 Mott Street for me.

The Bee Gees music was causing nostalgic thoughts while the bread was bringing back memories of Italy when the soup arrived smelling buttery and filled with potato, string beans, carrots and escarole. It was steaming hot and lovely. I can’t recall Minestrone I’ve enjoyed more. A shaker of grated cheese was already on the table and I used it to good advantage on the soup. The pepper-shaker was filled with large black pepper flakes and a few shakes of that and my soup increased my nostalgic mood.

Miguel waited for me to finish the soup before bring out the main course and it was a real treat for the eyes. The veal filet was pounded flat, breaded and fried and the crumbles of Gorgonzola cheese in its light cream sauce made it look almost like an early snow scene. The penne pasta stacked next it was also coated with the bewitching sauce and the roasted walnuts were sprinkled over all. It was heavenly. Now I really missed Italy and had to wipe my eyes. It’s funny how good food prepared well can make you hungry even when you’re not. I finished it all.

I needed a “thinking” wine to consider dessert and I ordered a glass of cabernet while Miguel presented the dessert list. Two sips later and a look at the sandwich card standing on my table and I knew what I wanted. The special dessert of the day was a chocolate fudge cake with a “molten” chocolate center. I managed to keep from laughing as I ordered it because it was exactly the same dessert that the critic in the movie Chef ordered when he panned the restaurant on Twitter. I had visions of Jon Favreau ranting at him, putting his fingers into the cake to prove the center was “molten.”

The cake arrived in a pool of dark chocolate sauce and sided by a ball of beautiful vanilla gelato. It was delicious. The center was not molten (chocolate did not ooze from it when I opened it) but I didn’t care. Trying hard not to giggle, I finished it as well. Then a double espresso and a snifter of black Sambucca later and my pre-show dinner was completed.

I never had the chance to dine at the Heng Shing Chinese restaurant before it became Tre Sorrelle, but I’m glad it changed. Likewise I’m glad that the restaurant right next door changed from Spaghetti Western to Maxwell’s so that there wouldn’t be two Italians in one location (even though Maxwell’s does serve some Italian specialties). For my needs that evening Tre Sorrelle was perfect and I hope to return and have a proper Italian dinner there.

In 2012 there was a movie entitled Worlds Away starring Cirque du Soleil, and even though I’ve managed to see every live performance with maybe the exception of three shows, I avoided the movie. Why? I couldn’t imagine that a movie could hope to compare with the experience under the Grand Chapiteau (the great tent). I am continually drawn to Cirque du Soleil for the “Wow Factor” – that sensation of awe you feel when you see people doing amazing things you could never hope to do, and doing them with ease.

So when the Cirque Club notified me via email that the next extravaganza was happening in my back yard of Flushing, I leapt at the chance to get a ringside seat. Actually, no seat is a bad one, but I like to be as close to the stage as possible.

Founded by Guy Laliberté in 1984, during Quebec’s 450th anniversary celebration of Jacques Cartier’s discovery of Canada the first troupe’s Cirque du Soleil was a huge success and, as it was announced at this performance, this is their 30th anniversary as an entertainment tour de force.

Every Cirque du Soleil show has a story and Amaluna takes the audience to a remote island of Amazons and Sirens, beautiful women, and strange animals. A shipload of sailors is wrecked on the shore of this strange island and the Amazons take the men prisoner. That is, except for the Captain, who is a woman dressed as a man and who falls in love with the German-accented woman clown wearing a bright yellow dirndl. Together they comprise the comic side of the show. 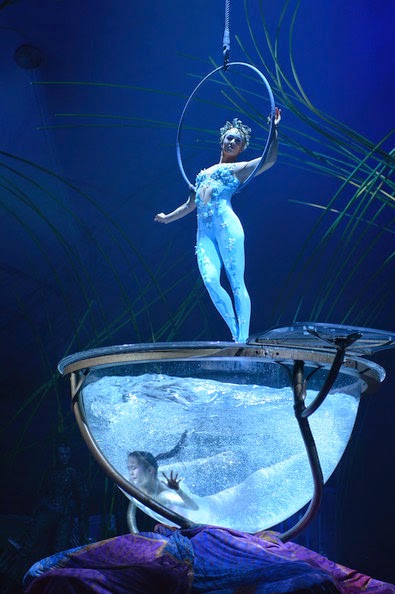 The stage is circular and the audience seating is arranged around it for about 60 degrees of that circle. The imposing prop in the center of the stage is a giant crystal chalice filled with water, a focal point for two acts. A young girl swims in and out of the cup while doing solo acrobatics on pedestals attached to the rim. She enraptures a handsome young sailor, and this generates the subplot of the story.

But halfway through the show the Moon goddess, Amaluna whisks her up to the top of the tent and out of sight of the young man and he performs his own amazing act on a single pole, trying to climb up to where she was taken. As this story is taking shape, the cast is performing various acts to a rock music background (also live).

We see a group twirling what appears to be large bolas while doing acrobatics on and under their fellow performers. Later the lights dim and the bolas light up for a more spectacular effect. There is a group of slim young girls in bright red costumes performing on what could only be called uneven parallel bars. Another group in Avatar blue costumes swing onto the stage on straps looped to their hands and soar over the audience. A young man wearing an alligator-like costume with a long tail snatches a big box of popcorn from an audience member and climbs one of the support structures of the tent raining popcorn on the audience to howls of laughter. Later, he has his own act. Standing on a covering over the chalice he juggles while the balls descend on him from the top of the tent. He surprises everyone by setting one on fire and juggles it with the others. Even the sailors have an act bouncing each other up and down on a seesaw, hurling and catching each other over the stage.

At a moment that could be termed “ceremonial,” a girl in a gold lame skirt picks up “bones” and arranges them balanced on each other until she is the hub of a large mobile swaying and turning and always threatening to fall apart. The audience was breathless during this scene.

Nothing on a movie screen could dare to be as visceral a sensation as the excitement of a live troupe. I love the costumes. Two performers had enormous peacock tails dragging behind them that they could fan open at will. Even the singers were fantastically garbed. (Oh, by the way, I have added something to my “bucket list.” I want to be one of the singers in a Cirque du Soleil show.) I’ve seen shows in Orlando, Las Vegas, Boston, Philadelphia, New Jersey as well as Manhattan and every time I’ve left the tent almost exhausted from applauding. If you’ve never been to a Cirque du Soleil performance you’ve cheated yourself out of a major moment in your life.
Posted by Celluloid club at 10:32 AM