Beauty and the Boss

With all the social dramas Warner Brothers had been presenting to their audience, perhaps they figured the time was ripe to break it up a little and give the audience something to lift their spirits. And this cheery little fairy tale is just what the doctor ordered.

Viennese banker Baron Josef von Ullrich (William) is a busy man who believes women have no place in the office. (“Women are for non-working hours.”) He fires his current secretary, Ollie Frey (Doran) because she distracts him during working hours. He then gives her six months’ pay and but promises her that she’ll be seeing him when he has “a weak moment.”

Enter Susie Sachs (Marsh) - literally. While making her rounds in the city looking for work, she sneaks into his office. Rather oddly dressed, sporting a black umbrella and a black hat, she tricks the Baron into seeing her, and despite her shabby clothes and impoverished appearance, she amazes him with her energy, brains, and efficiency, so much so that he hires her on the spot. (She tells him she takes shorthand at 150 words a minute.) Here, he thinks, is the perfect secretary, a plain Jane that won’t tempt him on the job, so he can keep his mind focused on business.

But, in addition to her qualifications, she’s also very savvy. She immediately negotiates a higher salary and then picks up the phone, ordering a large amount of groceries to be sent to her mother (with a goose, at the Baron’s insistence). It takes her roughly five minutes to organize the Baron’s office into a model of efficiency, so much so that the Baron’s younger brother, Paul (Manners), and colleague, Count Von Tolheim (Kerr), are mightily impressed.

The Baron and Susie make a great team, as she keeps his affairs organized and protects his from distractions, especially the long list of women who are dying to see him (of which he is unaware). We immediately see that her protectiveness is spurred on by the fact that she, too, has fallen for the boss. Everything is fine until the Baron, accompanied by Paul, the Count and his aide, Ludwig (Butterworth), and Susie, travel to Paris to complete a business merger. After the merger goes through, and the Baron reaps a great profit, he suggests to Susie that she go out and experience Paris nightlife. What he doesn’t realize is that Susie longs to experience Paris nightlife, particularly in the company of the Baron. But he is all business towards her, and suggests she see Paris accompanied, not by him, but the delighted Von Tolheim and Paul. And that’s just fine with Paul, who seems to have developed a crush on her. (Shades of Sabrina.)

Hurt by the Baron’s suggestion, Susie confesses that she’s been keeping women away from his door. When the Baron discovers that Ollie is one of those women, he immediately sets up a date, and, as a punishment, orders Susie to deliver a box of flowers to Ollie’s room. 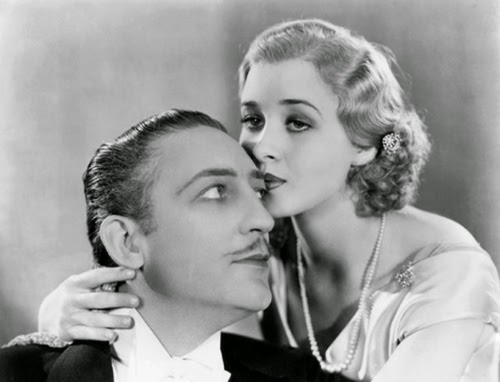 Ollie tells Susie that men will never notice her as long as she acts more like a machine than a woman, advising her to be more feminine, and demonstrates some of her flirtation techniques. Upon leaving, Susie decides to take Ollie’s advice, and that evening, when Paul and the Count arrive to take her out, she has transformed herself from ugly duckling into beautiful swan, dressed in a stunning evening gown with her hair styled attractively. The Baron cannot believe what he is seeing. She flirts with the Count and Paul, but runs back to the Baron, telling him that she is hungry for life. He fires her, but as she goes to leave, he asks her to take one more dictation. He dictates a memo in which he asks her to marry him and Susie happily consents.

Checking in at an economical 66 minutes, Beauty and the Boss boasts far more than a neat title. The film was adapted from a 1931 play by Ladislas Fodor and Paul Frank titled A Templon Egere (The Church Mouse), which starred Ruth Gordon and ran for 164 performances on Broadway during the 1931-32 season. Though the material is thin, the film benefits from a great cast, with Warren William, Marian Marsh, Charles Butterworth, and Mary Doran giving terrific performances. William, who usually plays Our Favorite Cad in Warner Bros. movies, is once again a cad, but in this case, he’s a nice cad. William is always fun to watch, but in this film we get to see him in a bit of a stretch, for as the film progresses, we see a change in his character as he tones down the edges and finds himself humbled by actually falling in love.

Marsh is perfection itself in a role that, were this film made a year later, would almost certainly go to the young Bette Davis. Marsh’s rapid-fire delivery would give Glenda Farrell and Rosalind Russell a run for their money. Director Del Ruth, goes out to ensure we’re on her side; the first time we see her, she’s dressed in impoverished clothing with little make-up, her face pressed against the window in a Viennese restaurant, where she watches William’s aide, Butterworth, enjoying his repast.

And the establishing scene, where she sneaks in and confronts the Baron, is the highlight of the picture, as she tells him about the plight of her class - what she refers to as the mice - poor and hungry. She describes herself to him as “hungry and poor as a church mouse,” which would become his nickname for her later in the film. To our surprise, the Baron is interested in her story; being rich and from the upper class, it never occurred to him that there just might exist a young lady in Austria more interested in being fed and clothed rather than collecting bling. The social Darwinian tone of the scene is lost on today’s audience, but back in the ‘30s, it was dominant in intelligent conversation. Were the film made today, that scene would have to be heavily revised to reflect today’s social consciousness.

As for Butterworth, what can I say? He specialized in playing droll, perpetually bewildered characters, and was a mainstay in early Warner Bros. films. We can always count on him for good comic relief and he is quite good in this film as the Baron’s assistant who is always writing last-minute instructions on his sleeves, is always at the boss’s beck and call, even having no objections when informed at the last minute that he will have to work through the night. Butterworth graduated from Notre Dame, where he studied law, and turned to newspaper reporting for the Chicago American and the South Bend News-Times before being bitten by the acting bug.

Former Ziegfield girl Doran makes the most of a minor part, shining in the film’s opening scenes with William, and later as Susie’s teacher in the subject of femininity. In the film’s opening scene, she’s taking dictation from William in a really racy scene. (Well, it is a Pre-Code film.) A close-up of her legs is followed by the Baron telling her “Yes, I see it, but I’ve seen better.” “But I didn’t think you could see my, umm . . .” “No, of course not.” William then continues distractedly looking over her form as he begins to criticize her obvious charms for distracting him from his work. As mentioned before, he fires her, but with generous severance pay and a “nudge-nudge, wink-wink, know that I mean, know what I mean” agreement to keep meeting after work that would have made Eric Idle proud.

David Manners has almost nothing to do but function as a sort of prop to William, and sleepwalks through his scenes. For someone supposedly totally infatuated with Susie, we’d never know it from the way he acts. And as for Frederick Kerr, why this wonderful actor was always given bite-size parts was always beyond me.

Director Roy Del Ruth keeps the film going at a breakneck pace, as if realizing that the less time we have to think about, the less thin and silly the plot seems. During the early ‘30s, Del Ruth was one of the workhorse directors in the Warners’ stable, where his nickname was “fastest of the fast,” due to his mastery of the in-house style. Checking on IMDb, I found he directed 10 films during 1932-33 alone. After his contact with Warner Bros. expired, Del Ruth worked for his old boss, Darryl Zanuck, at 20th Century before signing on with MGM, where he turned out a succession of musicals, including Broadway Melody of 1936, Born to Dance, Broadway Melody of 1938, and The Chocolate Soldier, among others.

Beauty and the Boss, although much lighter than the usual Warner Bros. fare of the period, is still a creature of its zeitgeist, and as such should be enjoyed with a grain of salt.
Posted by Celluloid club at 7:40 AM