With the recent Oscars ceremony and the amazing amount of examples of film artistry and superb acting jobs up nominated and honored, we need a movie like Beautiful Creatures to put it all in the proper perspective. This is not to say the acting was bad. It just wasn’t good. The film itself was not bad; it just wasn’t art. In fact it was akin to watching an amalgam of Bewitched and The Young and the Restless with a lot of familiar special effects and some great costumes forced into an all-too-familiar storyline.

Romeo and Juliet have seen many reincarnations over the decades and this is just the latest one. The sleepy southern town of Gatling, South Carolina, is the charming setting for the Duchannes family, who own most of the properties and are a family of “Casters” (not witches!) who obviously moved to this town from New Orleans. They are despised by the locals as satanic worshippers, even though nobody in the town knows them or will even associate with them to find out the truth. The daughter, Lena (Englert) endures constant taunting by her schoolmates (often to bouts of terrific over-acting) until she meets Ethan Wate (Ehrenreich) and they both fall head-over-heels in love. No matter what he sees or experiences and despite several warnings, Ethan is steadfast in defending and caring for Lena, even to the point of defying her spell-casting, lightning-wielding relatives, who are gathering for Lena’s 16th birthday ceremony when she will have to choose the darkness or the light (bad witch, or good witch). Lena lives with her father Macon Ravenwood (Irons), grandmother (Atkins) and Aunt Del (Martindale), all who have chosen the light. Her mother, Serafine (Thompson) and her two cousins Larkin Ravenwood (Gallner) and Ridley Duchannes (Rossum) have chosen the dark and are warily anticipated at the gathering. 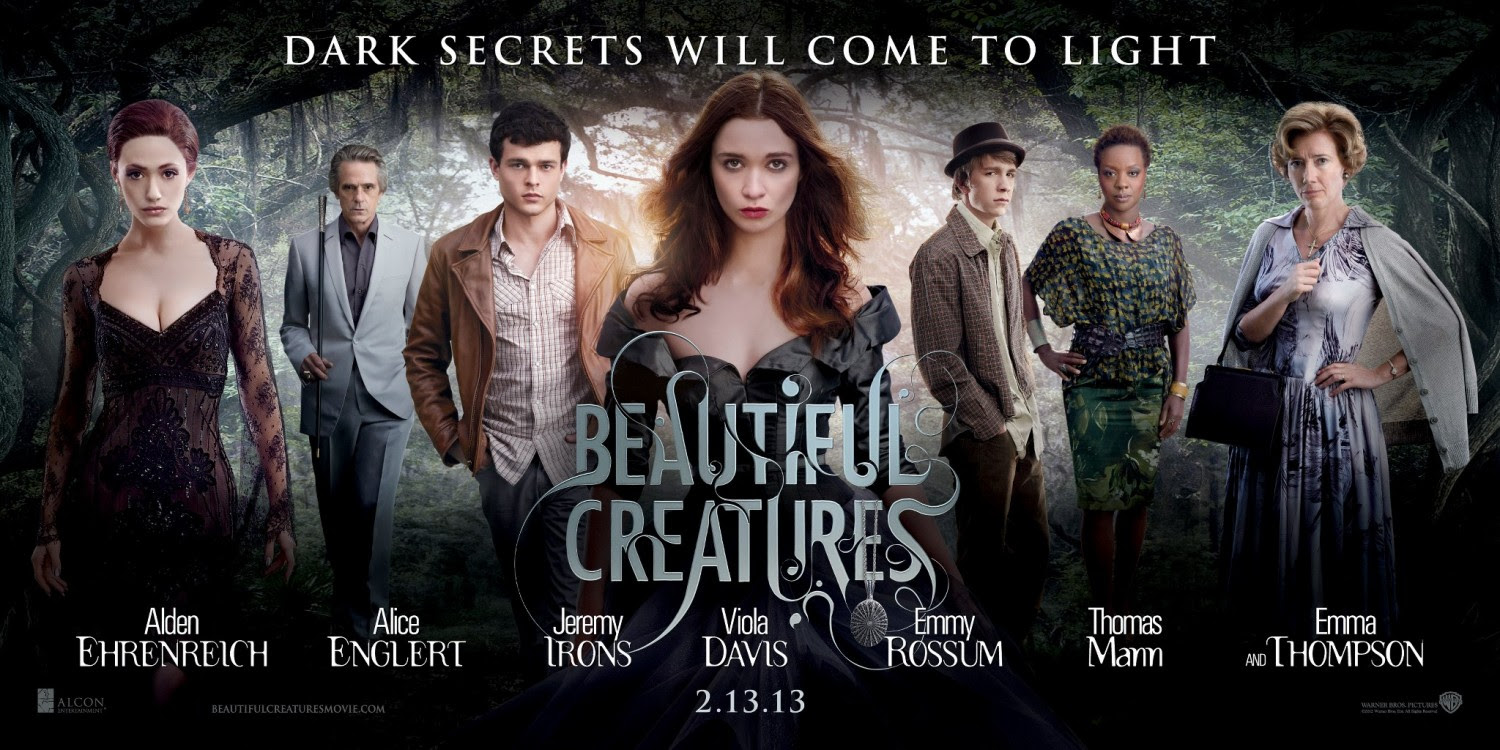 We learn that there is a curse on the family (there always has to be a curse) which started when Lena’s grandmother Genevieve Duchannes (Brosnahan) fell in love with a mortal during the Civil War and used a forbidden spell to bring him back to life after he was shot dead on the battlefield. She then automatically became a part of the dark and killed him all over again. (Kind of pointless, no?) Anyhow, in order to break this curse, Lena learns from Amma the Seer (Davis) – who is also subbing for Ethan’s dead mother – that someone she loves must die. At long last she tries a spell on Ethan that makes him forget he ever knew (or loved) her thinking that it would count as his death without killing him. It doesn’t.

It’s not until the climax of the film when the “mortals” are reenacting the “Battle of Honey Hill” and the casters are gathering for the 16th birthday ceremony that Ethan and his best friend Link (Mann) wind up at the exact place where the curse was incurred. One is dressed as a Union soldier and one as Confederate. Deciding to just shoot each other because the reenactment is boring and meaningless for them they get a surprise. Having had a tryst with one of the caster cousins previously, Link is tricked into materializing and loading a live round into his rifle and Ethan (we think) is mortally wounded. Lena feels the pain of the shooting and comes running to his side weeping, when he transforms into her father. The person she thought was her father at the ceremony was actually her cousin in disguise. The curse is broken but she still must choose light or dark. After causing a tornado and multiple lightning strikes that severely disrupt the Honey Hill reenactment, Lena dismisses Ridley and has it out with her mother, finally turning her into what looks like a dead grapevine.

Lena goes back to school, meets Ethan (who still doesn’t remember her) who wishes he got to know her better but is on his way to New York City and a better life, and all seems lost. Link drives Ethan almost to Interstate 95, the car stops, Ethan gets out and cries, “Lena!” Lena hears him all the back at the library and the movie ends.

Except for Viola Davis, forgive me, but I did not believe a single Southern drawl. And other than a few bright moments from her, Jeremy Irons and Emma Thompson, the acting was nil to overdone. As I said, the costumes were interesting. Was there music in this film? I didn’t notice. Just one special effect stood out. Ethan is trying to get back to Lena at her plantation-style mansion. He parks at the gate, walks a few yards and comes right back to the gate and his car. He turns around and walks back and sees himself coming the other way. I liked that. Otherwise, Beautiful Creatures is forgettable.

When I arrived at the juncture of 5th Avenue and 21st Street I was slightly tired because I had a miscalculation of time. The movie let out at 7:07 PM and my dinner reservation was for 7:15. With a little bit of hustle in my step I made the jaunt from 2nd Avenue and 31st Street in 20 minutes, amazing the young gentleman at the captain’s station. From outside, the only indication that the restaurant is there is a maroon banner with the word Sen in white stylized lettering. Inside, the décor is simple; charcoal ceilings, white brick walls paneled table-height in rough outer-bark wood, black wood pedestal tables with matching chairs and swag lighting that looks like sleek flying saucers. The bar dominates the center space with its multi-tiered shelving displaying colorful bottles of sake and other spirits. 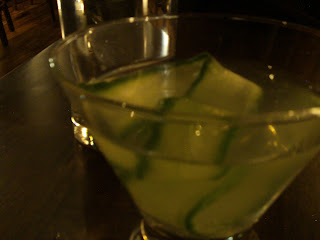 My waiter, Daniel apologized for being so busy (the place was well filled with customers) and brought a glass or water and took my drink order, a Sake Martini – sake, vodka, and cucumber juice with a thin slice of cucumber folded neatly – delightful. I even ate the garnish (twice).

The menu took a lot of consideration because of its many divisions and styles of Japanese preparations. Not wanting to stuff myself, I consulted Daniel on the Rice Pots – all of which looked tempting. He explained that they were not big enough to be main courses, but were too big to be considered side dishes. I had ruled out all the meat dishes (Lent, you know) and asked about the sushi rolls. Daniel pointed out that some were larger than others and had more pieces - another factor which I added to my overall hunger and appetite.

The wine list is divided up according to price (what a great idea!) $30, $45, $60, $75. I chose a 2009 Chenin Blanc from Chidaine vineyards. Its smooth semi-sweetness went beautifully with every course. 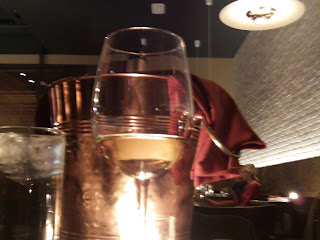 For the next course I chose a sushi roll called Golden Pacific Roll – a black seaweed wrapped roll of rice surrounding a heart of Uni (sea urchin) and Salmon Roe – and once again I was transported! I told Daniel that this dish tasted so good, it should be illegal. Even the soy sauce was homemade by Chef Emperor (yes, his real name is Emperor) and was not as salty as I expect soy sauce to be. It was perfect.

I wanted the Meru (Sea Bass) main course but Daniel informed me that they were all out of it. I asked if they had a back-up seafood main course (it was the only one on the menu) and was told no. How about a seafood-oriented dish that could serve as a main course? With that, Daniel suggested the Chirashi Meshi, one of the Rice Pots with seafood flavors seaweed, vegetables and a scallop topper. By now I trusted any dish this restaurant had to be excellent and I agreed. When the Rice Pot arrived I was charmed as much by the presentation as the enticing aroma of the dish. It was served in a gleaming steel pot set into a blonde wood tray (to keep people from burning their fingers on the extremely hot pot – I did touch it and can vouch for its temperature). Something told me that this was not the dish I ordered but I dove into it in a kind of feeding frenzy. The woodsy, earthy smell of truffles and the sweet buttery flavor in the short-grained rice mixed with slender brown woodland mushrooms told me this was the Truffle-Butter Rice Pot, but I didn’t care. I was reveling in gourmet land. Daniel asked how it was and I assured him the pot would be emptied.

I did indeed finish it when another server brought the correct dish to my table. He explained the accident and said the other dish was on the house. No complaints from me. I still had wine left and appetite. I was a quarter-way finished when Daniel presented me with a Uni sushi, saying he knows it’s my favorite (yes, I told him earlier) and he apologized for the wrong dish arriving first. I was in Heaven! It was not easy to slowly savor the sushi before I finished half of the Rice Pot and requested it be packed up to leave room for dessert.

Dessert was simple. Either it would be an apple tart or a cherry tart. I chose cherry. It was a lovely four-inch diameter disk of flaky pastry with cherry filling and crosshatched crust on top dusted with confectioner’s sugar. To accompany it there was a nice cup of green tea. Lastly, after noticing (and not being able to take my eyes of it) a tall, pyramid-like ruby red glass decanter on one of the shelves behind the bar, I asked what it was. Thus, Starr: an African rum distilled and bottled on the island of Mauritius, became my after-dinner drink – a nice mellow flavor with only a little kick. Thanks to Chef Emperor and Daniel I now have a Japanese restaurant on my list to rival Chef Morimoto’s. Let the competition be fierce!

For the Dinner and a Movie archive, click here.
Posted by Celluloid club at 10:20 AM