Claude Chabrol has been called “the founder of the French New Wave.” At any rate he was the first one of the Cahiers du Cinema crowd to become a director. Cahiers cohorts Francois Truffaut and Jean-Luc Godard would quickly follow. Chabol was known for his vicious satires – films exuding a pointed disgust for humanity in general and the French bourgeoisie in particular. Story of Women (Une affaire de femmes) is a dramatization of the story of Marie-Louise Giraud, who in 1943 had the dubious distinction of being the last woman beheaded in France. Her crime? She was an abortionist, and abortion was a capital offense in Vichy France.

For those not acquainted with Vichy France, a little history lesson is in order. In 1940, France was soundly beaten and occupied by Nazi Germany. One of the terms of the armistice was the division of France into a Northern Zone, occupied by Germany, and a Southern Zone, a puppet state known for its capital in the spa town of Vichy and headed by Marshall Philippe Petain, the former hero of World War I. To mollify their masters, the rulers of Vichy France promised that, besides ferreting out Jews to be handed over to the Nazis, its State Tribunal would execute a certain number of “criminals.” After clearing the jails of hardened criminals, Communists, and other dissenters, the Tribunal broadened its net looking for bodies to meet its quota. And into that net fell young Marie-Louise Giraud, arrested for performing 23 back-alley abortions, and renting rooms to prostitutes. Given the circumstances, with abortion being illegal in France since 1920, she could look forward to an imprisonment from one to five years and a fine of up to 10,000 FF. But the Vichy regime took the extreme position of sending her to the guillotine, justifying its action by stating that it was protecting the common morality of French society. The case was the basis of a book written by Francis Szpiner and caught the attention of Chabrol, who was drawn to the existential irony of the story: that a state wishing to make an example of how women should not say no to motherhood wound up depriving Giraud’s children of their mother. 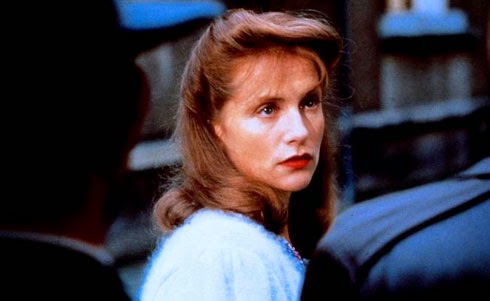 Now, if you think this is going to be a simplistic film in favor of women’s rights, you are clearly barking up the wrong Chabrol. Chabrol was a dedicated Communist and his films were noted for their close examination of the issues. This is a complicated film and Chabrot had exactly the actress for the lead in Isabelle Huppert. This was nothing new for Huppert. About 10 years prior she starred in his Violette Nozire as a young bourgeois woman in the mid-1930s who poisoned her parents (her mother survived) and stole their money to give to her lover. Once on the stand, she defended her actions by saying that her father had sexually abused her for years – although Chabrol never commits to any definitive answer of what really motivated Violette. Like Story of Women, this was based on a true story.

Chabrol has given Huppert a great canvas to fill in with her talents. And she comes through superbly; delivering a mesmerizing, richly nuanced performance that does not lead us in the audience to come to any final conclusions about her actions. Huppert draws on the ambiguity in her character and thus we do not know whether to support her as a victim or to condemn her as a self-serving criminal. The judgment lies not with Huppert or in Huppert, but rather with Vichy France and its policies – this is Chabrol’s real target.

As the film opens, the year is 1941. Marie and her children, Mouche and Pierrot, are picking greens for dinner. Later she pays a farmer 50 franc for a rake to unearth the potatoes that will accompany dinner. When they get home, she notices boots on the table. This can mean only one thing: husband Paul (Francois Cluzet) has been released from the POW camp in which he’s been imprisoned since France’s surrender. She should be glad to have him home, but she’s only annoyed. Paul, having not seen her for about a year, wants to pick up their relationship, but she won’t sleep with him. He’s unkempt and needs a job, she says. It’s made clear right then and there that both she and Paul are victims, not only of the war, but of their own incompatibility. As time passes it also becomes clear that Paul is not the man she’s looking for; she wants a husband that represents success and the money and power that accompanies it, not a menial worker. Paul’s condition makes it difficult for him to hold a steady job.

While she is despairing over her condition, opportunity suddenly knocks in the form of a woman who tells Marie that a mutual friend has recommended Marie’s services. The woman is pregnant and does not want to carry to term, so Marie performs the abortion. The scene makes clear that she performs this service as a favor, but when the woman recovers after a night or so of heavy bleeding, she comes back and pays Marie for the “favor.” Until then Marie has earned a scanty living knitting sweaters, a job she’s not temperamentally suited for, as is made clear in the film. Now she’s being paid for her “favors,” and it opens new vistas. Marie uses the money for necessities for the children, but also has an epiphany: why continue performing abortions free when there’s money to be made? At first Paul is curious about where the new money is coming from, suspecting her of prostitution; maybe that’s the reason she refuses to sleep with him. But he learns to look the other way when he discovers her true trade.

As the money begins coming in, Marie moves the family out of the rathole they were occupying to a larger place, and then to an even larger place. Along the way she makes the acquaintance of Lucie (Marie Trintignant), a prostitute plying her trade under the name “Lulu.” As they become fast friends, Marie confides to Lulu about how she makes a living and soon Lulu is sending her friends to Marie. It seems that unwanted pregnancies are a necessary hazard of their profession. As a result, Marie is making a pretty good buck, as Lulu is referring friends, and women are coming in from other referrals. Marie now gets another brainstorm. As she is now ensconced in a much roomier apartment, she rents out a spare room to Lulu and friends to use as a safe trysting place. Marie has graduated from a poor simpleton to a well-to-do capitalistic simpleton. And death has made it all possible.

Things keep going well for Marie. She goes with her kids to a town fair. A young man named Lucien (Nils Tavernier) has won the grand prize: a goose. He and Marie make an immediate connection and he invites her and the kids to sit down for a drink. As he leaves he gives Marie the goose, which she bakes for the family, telling husband Paul that she won it in a raffle. Soon Marie and Lucien are lovers and, for Marie, everything is perfect. If only Paul would leave. She even goes so far as to ask the new housekeeper if she would sleep with Paul to keep him happy.

But into every serene state a little rain must fall. And here is where it gets disquieting. As Marie is running to a date with Lucien, a woman stops her outside her door. The woman wishes to speak with her, but Marie brushes her off. It is only when the woman asks if Marie would rather she went to the police that Marie invites her in. The woman identifies herself as the sister-in-law of one of Marie’s “patients,” and tells Marie that her patient never recovered and died. Her husband, heartbroken, took his own life shortly after and now the woman has the six children. She asks Marie how she could do this; don’t unborn babies have souls, too? Marie’s answer is only along the lines of “I did everything I could for her. It isn’t really my fault.” The woman throws money at Marie to finalize the bill. Marie’s reaction is to pocket the money after the woman leaves.

Marie soon makes the mistake that will lead to her downfall. Seeing Paul now as absolutely useless, she looks down on him openly, showing her contempt. When he asks her where she’s going, she tells him to shut up and get back to his hobby, cutting photos and text from magazines and newspapers and making collages. Paul knows he’s being cuckolded, but not how or with whom. One day he returns to the apartment to find Marie and Lucien asleep in her bed. It’s at this point that Paul goes to his room and uses the cutout text to compose a letter to the police telling them what Marie is doing. They come to arrest her and she is thrown into a prison where she is a misfit with the rest of the population.

We learn that the state is not so much interested in her association with prostitutes, but with the abortions. It cites her for breaking the public morality, odd for a state that exists at the luxury of its German conquerors. Marie now becomes a victim, held by the much darker forces that constitute the government of Vichy France. They are determined to throw the book at her, but even her lawyer does not believe that they will actually put her to death. This, of course, is exactly what they do, and Marie is guillotined. Before she is led to the guillotine Chabrol shows her losing her faith (if she ever had any), doing an obscene version of the “Hail Mary.” The final scenes are moving and Chabrol makes his final point in a conversation her lawyer has with another attorney, where both voice their shame at being Frenchmen in a time of defeat and collaboration.

The most important subplot in the film is the story of Paul. What can one do when he and his children are dependent on a woman who doesn’t love him? Paul is a complex character, superbly realized in the performance of Cluzet, who could simply have remained in the background. He has been doubly betrayed: by Marie and by the defeat of his country for which he fought. The easy surrender and collaboration is also eating away at him.

In the end this is the secret of the movie’s success. Chabrol made the film with a careful eye upon each scene’s composition so as to have maximum effect on the viewer. Story of Women has a rough look to it, which is deliberate to avoid scenes that may look too orderly, or artificial; in other words, too slick. The camera becomes not a dictator of a scene, but rather a viewer itself, which gives the film a look of naturalism and the impression of an almost careless inattention to the style of its composition, adding even more to the illusion that we are witnessing not a film, but someone’s life, and keeps the audience from noticing each subtle manipulation. By taking a woman and exploring each and every detail of her persona, Chabrol manages to map that persona onto an epic scale – Marie Latour as a study in the corruption of an entire society.

To paraphrase Antonio Gramsci, the Italian Marxist, the personal is the political. However, while we applaud Chabrol for his insight, we must never forget that it is the performance of Huppert that makes the film what it is; her portrayal of a confused, contradictory and ambiguous woman. She has made an indelible stamp on our minds.
Posted by Celluloid club at 7:37 AM