When an actor grows older and loses his or her star luster, things change. No longer is there a limo from the studio to take them to the set; no, they have to use their own cars. Personal assistants are a thing of the past, as well as a private trailer for those quiet moments. It can be quite ego bruising, except if the actor happened to be a star for Warners in those early days when Pre-code films ruled. Warners didn’t lavish those extras on their stars – in fact, they were lucky if they got a few days off between films. George Brent and Joan Blondell were two of Warner Brothers’ biggest stars in the early ‘30s; stars that could be counted upon to carry a film, no matter if it was an “A” musical or a programmer placed under the First National label and released on the ‘B’ portion of the bill. 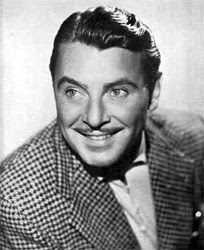 So when time and over-familiarity took their toll, stars like Brent and Blondell, who came of age in the assembly-line production methods of Warners, simply took stock of their employment situation and moved on to whatever would provide a paycheck. No muss, no fuss. They didn’t consider themselves stars so much as employees and it was this attitude that enabled them to survive in an industry marked by the corpses of those it threw away when they were no longer considered star material.

This attitude was perfect for George Brent. He had already led what some might call a full life before coming to Warners. Born George Brendan Nolan in Shannonbridge, County Offaly, near Dublin, he was orphaned at the age of 11. Moving to New York to live with an aunt, he would return to Dublin to attend university. He left the university in 1919 and became a member of the IRA, seeing service in the Irish War of Independence (1919-22). (What was odd about this was that he was the son of a British Army Officer assigned to Ireland.) He fled Ireland with a bounty on his head for his activities, though later in life he claimed to be only a courier for Irish revolutionary Michael Collins. However, British sources had him listed as an IRA hitman/assassin.

Reaching the U.S. in 1925, he changed his name to George Brent and began a career on the stage. His first appearance was in a touring production of Abie’s Irish Rose. During his travels he took a small, uncredited role in John Ford’s The Iron Horse, but after filming was over he decided to return to the stage. In 1927, he made it to Broadway, appearing in Love, Honor, and Betray alongside another young actor, Clark Gable.

Upon learning that Hollywood was looking for actors that could speak well, he landed there in 1930. He made his first film, Under Suspicion, for Fox. He knocked around, accepting small parts for Fox and Universal. In 1932, he signed with Warners with the promise of leading man roles. He would remain with the studio for the next 20 years. Brent’s reputation quickly became one of a leading man that could work well with the more temperamental actresses on the Warners roster. This easy camaraderie enabled Brent to indulge in one of his favorite leisure activities: affairs with the co-stars. His first marriage was in 1927 to Helen Louise Campbell, who appeared with him in Love, Honor, and Betray. They divorced two years later.  His next wife was Ruth Chatterton, with whom he starred in such films as Lily Turner and Female. This union lasted two years. In 1937, he married Constance Worth, whom he had met at a party. This union lasted only six months, ending in December 1937. Next up was the gorgeous Ann Sheridan in 1942. They had met while starring in Honeymoon for Three. Again it was a short marriage, ending exactly 365 days later on January 5, 1943.

It wasn’t until 1947 that Brent settled down for good, marrying Janet Michaels in December 1947. This union lasted until her death on March 23, 1974, and produced two children: Barry and Suzanne. She wasn’t an actress; rather, she was a horse breeder, and Brent settled into a life of a horse rancher when he wasn’t busy in the movies and television, which became his new career in the early ‘50s. He retired from acting in 1960, only coming out of retirement once, in 1978, in the film Born Again, the story of how Watergate conspirator Charles Colson found religion.

Cast a good actor in a B-movie and we really have something to watch. And that’s the case with George Brent. He always brings his “A Game” to the “B Movie,” never letting down despite scripts that often let him down. In the first movie on the docket, we see what a good script and crisp direction can do to make a movie enjoyable. In the second movie, we see the stars struggle with second-rate material.

The scenario of a newspaper and its employees is custom-made for the B movie. Things move at a mile a minute and there’s little time for the in-depth characterization we find in an “A product.” Such is the case with our two featured movies.

You Can’t Escape Forever sounds more like the title for a prison or crime movie than a newspaper story. But there it is and we have to go from there. Warners had a wonderful talent for recycling films. Beginning with a story by Roy Chanslor, our movie was originally filmed in 1934 as Hi, Nellie!  Paul Muni and Glenda Farrell shared the lead. The story pops up again in 1937 as Love is on the Air with Ronald Reagan and June Travis in the lead. So this is the third go-around for this particular story. There would be a fourth version in 1949 entitled The House Across the Street, starring Wayne Morris and Janis Paige. All four films share the same basic plot, but were modified to meet the times.

What’s the modification here? Well, the war is on and the worst thing a criminal could do is engage in the black market. Steve Mitchell (Brent) is the editor of a city paper and he’s on a crusade to bring black marketer and mob big Boss Greer (Eduardo Ciannelli at his villainous best) to justice. When Steve writes a story linking Greer to a suspicious murder without the necessary proof, Greer threatens to sue and Steve is transferred to the “advice for the lovelorn column.” But this does not deter him from his mission to put Greer behind bars. Aided by gal pal/reporter Laurie Abbott (Brenda Marshall) and comedy relief Roscoe Karns, Steve finally brings Greer to justice after a whirlwind tour of the less inviting spots in the city. In a climax clearly marking the times, Steve and a company of soldiers stop Greer and his henchmen cold.

What places this film above other “Bs” of the time is the snappy dialogue – shot back and forth fast and furious; great cinematography by Tony Gaudio and James Van Trees, masters of the low-budget camera; beautifully choreographed action scenes (check out the finale) and tight direction, never meandering for a moment, which is exactly what a “B” movie needs do. The acting by Brent, Karns and Ciannelli is excellent. But I had the feeling the film was intended as a vehicle for Brenda Marshall, who came across rather flat, as if the action were passing her by. Warners was trying to build Marshall for stardom, but she ultimately lacked the talent to put herself over.

I wish I could say the same for Columbia’s The Corpse Came C.O.D. With that great title and co-leads Brent and Blondell it should have been a most entertaining comedy, but it’s tied to a thin and trivial script that would serve better at 60 minutes rather than nearly 90. Brent and Blondell are competing reporters looking to outdo one another. (And of course they’re romantically involved.) When a starlet (Adele Jurgens) discovers the body of a costume designer in a crate of material sent to her home, she calls reporter Brent instead of the police to help her out. Brent suggests she brings in the police. Blondell, who sticks to Brent like glue throughout, blows her top and then decides to outdo Brent by solving the mystery herself.

Though Brent displays a fine touch for this sort of light comedy, Blondell completely outdoes him with her frantic energy. Jurgens is expected to be the beautiful star and she does that just fine. Though Blondell is not the babe that enchanted us during the early ‘30s, she still looks good and at age 41, outshines Jurgens in that department. I found it odd that she should be back to the Bs after turning in a sterling performance in 1945’s A Tree Grows in Brooklyn, but then Hollywood has never been gracious to older supporting actresses.

What really sinks the film, though, is its continual self-references. Though it is supposed to be a whodunit, it’s actually a movie about making movies. Every stale gimmick is taken out and flashed before our eyes: the blonde stick in the trashcan; baddies reaching out for Blondell in dark places; the usual stolen jewels; cats jumping out and scaring the stars; the corrupt cop behind it all shot by his partner; and, believe it or not the old mannequin stuck to the back gimmick. I thought that died with Abbott and Costello. The last 10 minutes of the film provide the background we should have been given in the first 20 minutes, a sure sign of sloppy plotting. And yet, despite it all, Brent and Blondell almost manage to pull the thing off.

TRIVIA NOTE: Look for future B director Fred Sears as Detective Dave Short.
Posted by Celluloid club at 7:19 AM