A Guide to the Interesting and Unusual on TCM

Hailed by critics and historians as the first masterpiece of director Mizoguchi, it’s the tale of a servant who sacrifices everything to advance the career of her lover, a socially-higher-born Kabuki actor. 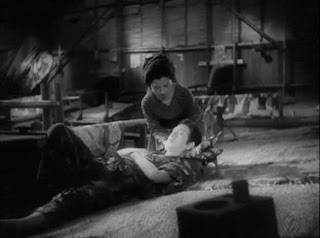 Hanayagi stars as the adopted son of a famous actor (Kawarazaki) in 19th century Tokyo. While he’s far from mastering his craft as an actor, all who are around him lavish praise because of his social status. Only Otoku (Mori), the nurse of his newborn brother, will tell him the truth. This, in turn, forges a bond that defies social convention. She encourages him to strike out on his own to discover if he can truly master the Kabuki art. His quest to become famous is also aided by his hope that once he does so, he can marry Otoku, for she has lost her job due to the budding romance.

Pre-World War II Japanese films are both a rarity and a treat, for they open a window into a world that changed dramatically with Japan’s surrender in 1945 and the re-ordering of traditional morays. Because of that, and the director’s style of long takes and medium shots, it’s a Must See. For those not that familiar with Mizoguchi, his most well-known film is Ugetsu (1953). TCM previously screened his 1952 film, The Life of Oharu, a couple of months ago.

It’s hard to believe now, but when this film opened in 1942, it was savaged by critics for its “lighthearted tone” about the Nazis and ignored by the paying public. Over the years, however, it has caught on with both critics and the public and is now hailed as a comic masterpiece. Bosley Crowther’s review in The New York Times (March 7, 1942) states that “To say it is callous and macabre is understating the case.” We had just entered World War II and no one was in the mood for humor, much less a dark comedy about Polish underground fighters battling the Nazi conquerors. Had the film come out a year sooner, it would have garnered the critical praise and audience reaction that Lubitsch films had come to expect.

Regardless, it’s a hilarious film and it contained the role of a lifetime for Benny, who does not disappoint. It was also the last film for the beautiful and talented Lombard, who matches Benny line for line as his long-suffering wife. To say it should be on the Must-See List for any film fanatic is an understatement.

Trivia: After Lombard’s death in a plane crash, the line “What can happen in a plane?” was deleted from the film.

This is a great low-budget noir about a woman (MacKensie) searching for the thug who killed her father. But never mind the plot, watch this for the great list of actors it contains: Former East Side Kid (“Stash”) and Future Bowery Boy (“Duke”) Clements, Hatfield, Dekker, and John Dehner, among others. Clements, for instance, is playing a playboy hit man (!).
June 27

Based on (and remarkably faithful to) the 1942 sci-fi classic novel from Curt Siodmak, it’s the story of a scientist (Ayres) who saves the brain of a millionaire industrialist and keeps it alive in a tank. But the brain has a mind of its own (groan!) and imposes its powerful will on the scientist, using him as a tool to gain revenge on his enemies.

Jokes aside, this is a solid film that could have easily become silly were it not for the tight pacing and excellent performances from the cast. Ayres in particular gave a finely nuanced performance as the scientist whose mind no longer is his own. This was Ayres’ last starring role. His career had been badly damaged by his choosing conscientious objector status in World War II, even though he became a medic and risked his life on several occasions to save wounded soldiers. Future first lady Davis is fine as Ayres’ wife and Evans turns in a decent performance as Ayres’ assistant. For a supremely cheesy moment, though, watch for the scene where the brain turns blackmailing news photographer Brodie into a zombie and send him to his death in a car crash.

Trivia: Republic Studios first made the book into a movie in 1944 as The Lady and the Monster, directed by George Sherman, and starring Erich Von Stroheim and Vera Ralston . . . Steve Martin made his version in 1983 – The Man With Two Brains.

This rather unusual combination of the Western and horror genres comes from a story by animator Willis O’Brien, most famous as the man that animated King Kong. But the producers couldn’t afford for O’Brien to animate the film, so they went with a cheaper process. The plot is simple: American Madison has his ranch in Mexico. His cattle are disappearing. He sets out to find out why. And he does. It was remade in 1969 as The Valley of Gwangi with Ray Harryhausen handling the animation. 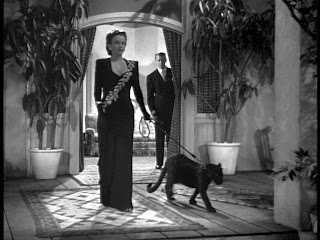 O’Keefe is press agent Jerry Manning. He convinces client, singer Kiki Walker (Brooks), to incorporate a black leopard in her act. The stunt backfires when the cat escapes and begins murdering people in the nearby town. After a while, however, Manning begins to suspect if the cat is indeed responsible for the killings. Could the killer be human? That question forms the basis for his quest throughout the rest of the movie.

The film is at its best when it uses the power of darkness to play on our childhood fears. In its most memorable scene, a teenage girl (Landry) is sent by her mother on an errand to purchase cornmeal for the family’s dinner. After a walk to the store and home, made all the more spine-tingling by Tourneur’s use of empty streets and a pitch-black riverbed, she makes it back home only to be attacked on her doorstep. All we hear are her screams combined with the sight of her blood running underneath the door. Though we never see the cat or the attack itself, the scene is most terrifying.

Trivia: The black leopard used in the film was named “Dynamite,” and had previously appeared in Cat People.

The Falcon is on vacation in Tinseltown, losing at the racetrack when he becomes involved with two gorgeous women (Hale and Corday) and an apparently stolen handbag. This takes him top the backlot of Sunset Pictures, where he discovers the body of dead actor Ted Miles. Of course, there’s the usual carload of suspects, but the writing is intelligently done and the steps to discovering the killer are all logical.

Borg, as Billie Atkins, a wisecracking, brassy taxi driver that becomes the Falcon’s assistant, steals the film. The best scene comes when Billie and the Falcon pay a visit to the dead man’s apartment and lament on how sad a dead man’s room is, and if he had been “worrying about tragic things like a broken shoelace” that day. It’s not just for those fans of the series.

Nowhere is the influence of the French New Wave better seen than in this highly-stylized gangster flick from director Suzuki. Paroled ex-con Tetsu (Watari) wants to go straight, but the odds are strictly against him. Hounded every step of the way by former gang members, rivals, and cops, Tetsu keeps on the move, playing enemies against each other while coming to the rescue of victimized nightclub singer Chiharu (Matsubara). The action varies from neon-lit Tokyo to snow-covered country vistas and features beautifully designed sets, quick editing, and stark color schemes that will stay with the viewer long after the movie has ended.

Suzuki helped begin the yakusa craze among Japanese audiences with 1963’s Yaju no seishun (Youth of the Beast), but by 1966 had grown tired of rehashing the same film and changed the palate with Tokyo Drifter. The studio was so outraged they made him change the ending and issued a warning to Suzuki that they would accept no more films like this. Suzuki, however, paid no attention and continued along his new track, making Fighting Elegy (1966) and Branded to Kill (1967). The latter film was thought to be so terrible by studio executives that they shelved it. Suzuki took the company to court, and since his contract stated that the studio was obligated to release his films theatrically, the court found in his favor and Nikkatsu had to pay damages in addition to releasing the film. This led to his firing, and with a bad reputation, it would be 10 years before he worked again on a feature film.

For other Cinema Inhabituel films, click here.
Posted by Celluloid club at 10:32 AM