Taking several deep breaths upon leaving the movie theater, I was happy to see that I had timed my trek to the restaurant to the minute (there were two conflicting estimates of how long the movie was). It turned out to be an interesting and enjoyable evening altogether, could have been a little better in aspects but overall, really good. Enjoy!

After succeeding in making their home planet unlivable the population of what was once Earth now live on Nova Prime in a planetary system, maybe even another galaxy, far away. Cypher Raige (Will Smith), his wife Faia (Okonedo) and son Kitai (Jaden Smith) live in what appears to be a high-tech apartment building resembling an amalgam of a teepee and a beehive in a gray and brown city. Cypher is a General of a force of “Rangers” who specialize in “ghosting” (showing no fear and bravely confronting danger).

This mind-set is particularly handy when dealing with “Ursas” – monstrous malevolent murderous creatures discovered on their new planet that look nothing like bears (as the name implies). They’re blind, but can “smell fear,” and are captured and transplanted to uninhabited worlds. Kitai is a ranger in training who has all the knowledge and book learning to pass but fails on the field tests, mainly because he cannot control his anger or his fear. (Kitai’s sister Senshi (Kravitz) was killed by an Ursa.) He’s trying hard to be what he thinks (and knows) his strict, unsmiling father wants him to become. His mother, though, understands both father and son, and tries to mediate. The general decides to take his son on a mission.

The stingray-shaped space ship runs into an “asteroid storm” (first time I’ve ever heard of one of those) and takes on serious hull damage. The general suggests using a wormhole to escape the storm, and they wind up on the verge of total demolition at Earth. Even though the onboard computer warns about the quarantine they have no choice but to crash land. (By the way, did I mention they are also transporting an Ursa in a cage that looks more like a giant chestnut husk?) The ship breaks in half, and all but the general and his son are killed. The general has sustained two broken legs, and the beacon to signal for help on the bridge is malfunctioning. It’s now up to Kitai to use his ranger skills to get to the ship’s tail (many kilometers away) and use the spare beacon, or both of them will die.

On the way, he has to deal with an atmosphere he cannot breathe without regular oral injections, tarantula-sized spiders with more than eight legs, bellicose bands of baboons, a lethally poisonous leaf-hopper/tick insect, a mother condor/eagle/roc who drops him into her nest as baby food, a pride of tiger/hyena/lion creatures, a planet-wide temperature fluctuation from steamy by day to arctic by night, and of course the Ursa. And when he finally finds the tail section and secures the beacon, the atmosphere disrupts the signal (can you hear me now?) and he has to climb an active volcano to enable it.

After Earth is really Jaden’s movie as a lead character. Those of us used to the wise-cracking character Will Smith plays in Men In Black will not see that character. If fact, Will effortlessly suppresses his comic side; but then, there is nothing funny about this movie. Jaden shows his full potential as an actor – displaying the entire range of human emotions in his forced survival training – and he does it very well.

There are surprises and scenes that make you jump out of your seat. The film has plenty of suspense, tension, pathos, excitement, chase scenes (both terrestrial and aerial), and a computer-assisted self-surgery. The biggest surprise is the moment of altruism on a humanity-hostile planet. The cinematography by Peter Suschitzky and scenery are beautiful and dramatic – it looks like Sequoia National Park and Costa Rica with its breathtaking falls. After a couple of flops, Shyamalan has come back to direct an excellent film. The musical soundtrack by James Newton Howard is as exciting as the scenes it accompanies and the writing fits the movie without interfering with the plot. In fact, I predict that the last lines will become a trivia question - “Dad, I want to work with Mom.” “Me too.” I see some Oscar nominations here. Rating: 4½ out of 5 martini glasses.

One would think that with the over-abundance of Italian restaurants in New York City I would find two featuring identical recipes. Well, I’ve dined at almost 300 and never had duplication. Angolo Soho is no exception to the rule. Knowing the evening temperature to be hot and humid, I predicted that the restaurant would be open to the street (Italians call it “natural air-conditioning”) and it was. I entered through the front door (which, by the way, is handicapped accessible) into a cozy, open brick walled space with floor-to-ceiling mirrors on the south wall, a well-stocked bar on the east wall (where I sat looking out at the street scene next to a beautiful bouquet of yellow spider-mums and apple blossoms) and about 10 black tables with black or orange chairs.  I chose the banquette seat. 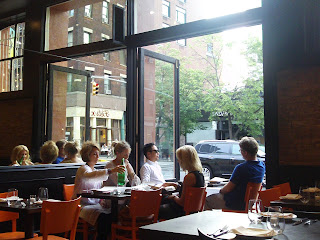 My waiter Anthony took my water preference and brought the single-card menu and the leather-bound cocktail/cordial/beer menu and the wine list. Anthony is a striking presence, slim and sporting a bushy beard and moustache with nary a hair anywhere else on his head. The menu features Soups and Salads, then Antipasti on the left, Primi (the pasta courses) in the center, Secondi (main courses) and Contorni (Sides) on the right and at the bottom, Formaggi Y Salumi (cheeses, terrines and deli). 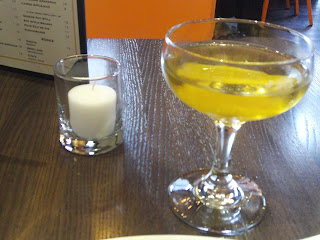 Thinking about the “natural air-conditioning” (it was never cool in the restaurant) led me to choose the cocktail called “Il Purgatorio” – an intriguing mixture of blended scotch, brandy, Ramazotti and yellow Chartreuse. Served in an old-fashioned champagne glass, it was a pleasant golden color. Don’t let that fool you, however, it’s a serious drink. 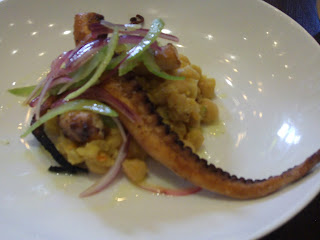 Anthony was a trustworthy adviser in planning my three-course dinner (I explained that I brought a healthy appetite) and cautioned me when I might have chosen too much food (they don’t do half-orders on the pasta). I started with the grilled Octopus, which was amazingly tender and tasty with a nice charcoal-grilled flavor over soft chickpeas and garnished with delicate slices of celery, chilies, lemon and Bermuda onion.

After complimenting the bartender on the cocktail I consulted Anthony about wine. The wine list not only had white (bianco), red (rosso) sparkling and pink wines, but also “orange” wines. Anthony described them as made using more of the skins of the grape to produce the coloration and that they were “cloudy” (interesting, but I was not ready for that yet). I asked about a couple of wines I’ve never tried before and he described the flavors expertly. I chose a 2006 Odoarti from Savuto vineyards in Calabria in southern Italy. Its deep red color and clarity were very attractive and the nose was fruity. The flavor was cherry-like, medium body with a spicy after taste – perfect for my meal.

The pasta was “Fettuccini Carbonara” and was the right-sized portion for a second course. The chunks of pancetta added the right salty/bacon-y notes to the light, cheesy/creamy sauce clinging to the pasta, which was al dente. The only surprise here was that the pasta was two to three times as wide as any fettuccini I’ve ever had. 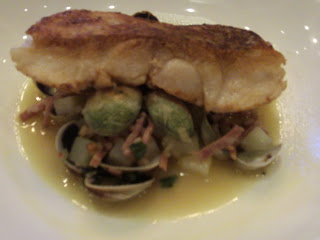 At this point I was completely comfortable in Angolo Soho’s being a true ristorante because they automatically timed my courses, waiting for each to be finished before asking to clear and never bringing a dish out too early. My main course was Golden Tile Fish - an inch high, five-inch long filet of light, flaky fish with a golden top crust perched on a mound of tender cockles in their shells, cubed potatoes and strips of prosciutto in a fish-based buttery sauce. I had to order more of the wonderful crusty bread to get every drop of that sauce. Another authentic touch, the bread was served with a small dish of olive oil and another of sea salt. I was no longer thinking about the heat and humidity.

Ignoring protests from Anthony (“I know you have a good appetite but…”) I ordered the cheese selection for dessert, three cheeses from the Piedmont region, La Tur – a soft, earthy cheese like brie, with a honey sauce, Castelrosso – a soft goat cheese tasting almost like a feta with a dark tart sauce, and Gorgonzola Dolce with a candied peach sauce. All were delicious but I commented about the Gorgonzola, which was not like any I had had before. Normally, I expect it to be more forceful in flavor and more marbled. Anthony explained that this particular recipe didn’t include the ash usually in Gorgonzola (or the live inhabitants that give it its name) and was meant to be on the sweeter side. It was that. The double espresso sided with a glass of Godiva Chocolate liqueur topped the cheese course masterfully and I thanked the by then amazed (finished every bite) Anthony for all his help. On my way home I wondered what happened to the pasta dish with a rabbit ragout (which I would have ordered with a nod to Jean and Gaby in Paris) but which was not there. Oh well, tant pis, next time.

For the Dinner and a Movie archive, click here.
Posted by Celluloid club at 7:13 AM