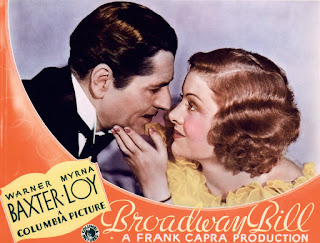 December 16: Tonight’s recommendation starts at 8 pm: Broadway Bill, a Columbia film from 1934 directed by Frank Capra. Warner Baxter is the son-in-law of business tycoon J.L. Higgins (Walter Connolly). He hates running Higgins’ paper box factory. He’d rather be out running his horse, named Broadway Bill, for his first love is horse racing. Everyone in the family thinks he’s a screwball except for sister-in-law Myrna Loy, who marches to her own drummer. It’s a lovely little Capra comedy with matchless performances from almost everyone in the cast. As it’s not shown that often, it’s a film Myrna’s fans should not miss.

December 23: Beginning at 8 pm, the entire Thin Man oeuvre is being shown. It goes against our rule of emphasizing only the lesser seen and more unusual pictures, but we are talking about one of the classics of the screen and the five excellent (well, three anyway) sequels. For those who have yet to see any of the films in this series, this night’s your chance.

December 30: Two interesting films tonight: Myrna produces excellent support for star Doris Day in Midnight Lace (1960) at 8 pm. Doris plays a woman who can’t get anyone to believe she’s being stalked. It has a plot that’s on the other side of preposterous and Day gives us hysterical histrionics throughout. But as a Hitchcock imitation it’s fun to watch and Loy acquits herself nicely. The other film to check out is Lonelyhearts (1958), which airs at midnight. Based on Nathanial West’s novella, Miss Lonelyhearts, Montgomery Clift stars as a would-be reporter who is assigned by his publisher Robert Ryan to write an advice-to-the-lovelorn column, and becomes so involved with the suffering of those who write to him that it nearly destroys him. One of the women he becomes entangles with is an actress making her screen debut – Maureen Stapleton, Edith Bunker herself. Myrna gives her usual excellent perforate as Ryan’s alcoholic wife.

December 20: At 8 pm it’s Sam Peckinpah’s wonderful Western, Ride the High Country (1962) starring Randolph Scott and Joel McCrea as two long-in-the-tooth ex-lawmen who have fallen on hard times and sign up to escort a shipment of gold from a mining camp up in the Sierras to the town below. The urge to steal the gold is becoming too much for Scott, which leads to a rift with ex-friend McCrea. Along to complicate things even further is the presence of Mariette Hartley as a young woman running away from her overly stern fundamentalist father. When her wedding to one of the miners goes south at a drunken celebration she runs away with Scott and McCrea, earning the wrath of the other miners. It’s a stylized take on a familiar Peckinpah theme – the decline of the American West, focused on the plight of his protagonists, two men who have survived the chaos of their times but cling steadfastly to their ethics, each one being an example to the other of what he might have been given different circumstances. It’s Peckinpah at his best and a film that should entertain even to those who aren’t crazy about the Western genre.

December 27: For a change of pace try The Whales of August (1987, midnight), a gentle drama of two elderly sisters who have endured an uneasy co-existence over the years. When it’s revealed that the sisters are played by Lillian Gish and Bette Davis, the film becomes even more enticing. The ladies are spending the summer together in a home owned by Gish but sustained by the wealthier Davis, who is blind and become embittered over the years. The drama takes place over the course of one day near the end of the summer season, revolving around an almost insignificant point: Gish wants to install a picture window to look out on the sea, but Davis vetoes it, claiming they’re too old at this point to be considering new things. Gish and Davis are simply enchanting and they are supported by first-class performances from Vincent Price, Ann Sothern and Harry Carey, Jr. It was Gish’s last performance and she went out in style.

This year TCM is airing both classic film versions of Charles Dickens’ A Christmas Carol. Fans over the years have always split over which was the better version, the 1938 MGM version starring Reginald Owen as Scrooge, which will be shown on December 18 at 9 am, or the 1951 English version, from Renown Film Productions and United Artists, which will be shown on December 22 at midnight with Alastair Sim as Scrooge? Don’t look to me on this one. I love and recommend them both. There are slight differences in both versions and each is gifted with wonderful performances. In the 1938 version, Gene and Kathleen Lockhart play the Crotchets with Ann Rutherford shining as the Spirit of Christmas Past. The 1951 version has Sim as an even meaner Scrooge with Mervyn Johns and  Hermione Baddeley as the Crotchets. A suggestion: Next year TCM should run both versions back to back with the delightful Mr. Magoo’s Christmas Carol following. We haven’t seen that one in a dog’s age. It’s always fun to watch Sim in action. His performance as the sarcastic Inspector Cockrill in the sublime mystery Green for Danger (1947) set the stage for the later Inspector Morse character, played by the incomparable John Thaw. 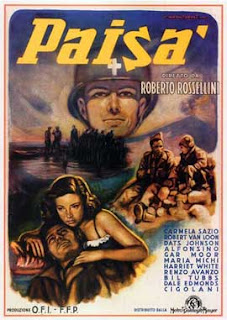 December 18: Roberto Rossellini captures the essence and spirit of the Allied occupation of postwar Italy in his superb 1946 episodic drama Paisa (aka Paisan). Six vignettes depict the heartbreak and hope that was postwar Italy. As with Open City, Rossellini used a mostly nonprofessional cast, along with documentary footage and a script that was often improved on the spot, written by the director and his friend Federico Fellini. Ironically, it did not do well at the box office in Italy. The Italians were already tired of war stories. But the French loved it and it did well in the United States. See for yourself and marvel.

December 19: Federico Fellini made many great films during the ‘60s. None were better than 8 1/2 in 1963. Marcello Mastroianni excels as Guido Anselmi, a famous film director buoyed by the success of his recent film who suddenly finds himself at a loss for new ideas. Hounded and nagged by everyone from his wife to his mistress to the press and even his fans, he retreats into a mix of memories of childhood and those of all the women he has loved and lost. It’s autobiographical and is acknowledged to be Fellini’s masterpiece by many and has many of his trademark features, such as aerial shots, vertical zooms, lots of jump cuts, and the Fellini fascination with the unusual, grotesque, bizarre, and exotic which marks many of his films from La Strada to Satyricon. The meaning of the title comes from the fact that Fellini had made six features and three shorts, which add up to 7 1/2. Hence 8 1/2. The film has something of a reputation of being hard to understand. Nonsense. Viewers can quickly grasp its theme and plot.

December 18: Two great Pre-Codes from our Star of the Month, Myrna Loy. At 5:00 pm, Myrna is a German spy working for Lionel Atwill who falls for American medical student George Brent in Stamboul Quest (1934). Following at 6:30, Clark Gable is a young doctor who must choose between his studies and his marriage to alluring society girl Myrna Loy in Men in White(1934). The film proved so popular that the Three Stooges parodied it in their 1934 Columbia short Men In Black.

December 20: Irene Dunne and Richard Dix fight to survive in the early days of the Oklahoma Territory in Wesley Ruggles’ Cimarron (1931).

December 17: The Stanley Clements era with the Bowery Boys commences at 10:30 am with Fighting Trouble (1956). Stanley, playing Stanislaus “Duke” Covelske, tries to earn a living with Sach (Huntz Hall) as news photographers.

At 2:45 am, troubled teenager Suzanne Ling sics her horde of pet tarantulas on her enemies in the cheapie Kiss of the Tarantula (1976). Best scene: A couple making out in a car not noticing the eight-legged wonders crawling on them. Following at 4:15 am is Alice, Sweet Alice (1977). When people in an Italian-American neighborhood are killed, suspicion falls on lonely 12-year old Paula Sheppard. A good shocker filmed in Paterson, N.J. Young Brooke Shields is the first killed.

December 22: At 1:15 am, it’s Laurel and Hardy in the children’s classic Babes in Toyland (1934). Stan and Ollie are inept toy makers whose latest blunder saves the day when the evil Barnaby (Henry Brandon) unleashes the bogeymen to destroy Toyland.

December 26: An evening of apocalyptic films begins at 8 pm with Charlton Heston fighting mutant vampires created after a biological war in The Omega Man (1971). At 10 pm, Harry Belafonte, Inger Stevens and Mel Ferrer are the only survivors of a nuclear war in The World, The Flesh, and The Devil (1959). Dial ahead to midnight and it’s Gregory Peck, Ava Gardner, Fred Astaire, and Anthony Perkins who are among the survivors of an atomic war in On the Beach (1959). At 2:30 am comes Five (1951) from Arch Oboler, about the survivors of yet another nuclear war. And, finally, at 4:15 am, Nigel Davenport, Jean Wallace and Lynne Frederick are among the few to survive an environmental holocaust in No Blade of Grass (1970). 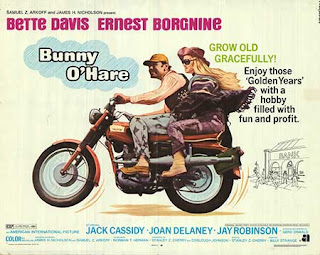 December 27: Bette Davis and Ernest Borgnine make for a unusual pair of bank robbers in AIP’s Bunny O’Hare (1971) at 4:15 am. Davis was so unhappy with the finished product that she filed suit for damages. Though she dropped the suit, the damage was done.