THE GRAPES OF WRATH (January 2, 2:15 am): Only a year after John Steinbeck's 1939 classic story of the Joad family, Okies who travel to California after the Dust Bowl wipes out their farm, life doesn't get much better for the family on their drive and even worse once they get to the state. The book is a classic, but the film is even better. The film and book are certainly left-wing, pro-labor union and pro-Communist. As Roger Ebert has written, it's odd that Director John Ford and Executive Producer Darryl F. Zanuck, both conservatives, made this film. Despite the tragic story, the movie is beautiful and very moving. You'd be hard-pressed to find better acting than the performances here by Henry Fonda (Tom Joad), John Carradine (Jim Casy, a former pastor turned union organizer) and Jane Darwell (Ma Joad). Tom's goodbye speech to his mother can move you to tears: "I'll be all around in the dark. I'll be everywhere. Wherever you can look, wherever there's a fight, so hungry people can eat, I'll be there. Wherever there's a cop beatin' up a guy, I'll be there. I'll be in the way guys yell when they're mad. I'll be in the way kids laugh when they're hungry and they know supper's ready, and when the people are eatin' the stuff they raise and livin' in the houses they build, I'll be there, too." Ma says: "I don't understand it, Tom." He replies: "Me, neither, Ma, but just somethin' I been thinkin' about."

HEAVEN CAN WAIT (January 4, 8:00 pm): This 1978 remake of Here Comes Mr. Jordan is better than the original, and the original is a great film. Warren Beatty is Joe Pendleton, a quirky backup quarterback for the Los Angeles Rams who's about to get the starting job. He is killed in a tunnel when his bicycle collides with a truck. The problem is he's not supposed to die, but an overanxious "escort" (played by Buck Henry, who co-directed the film with Beatty) takes him early to Heaven. Pendleton's body is cremated before the problem is resolved so a new body is needed. He ends up as Leo Farnsworth, a ruthless businessman killed by his cheating wife (Diane Cannon) and his personal secretary (Charles Grodin) as the two are having an affair. It's funny, it's sweet, it's charming and the acting is extraordinary. In addition to the actors above, excellent performances are given by an all-star cast that includes Jack Warden, Julie Christie, Vincent Gardenia and James Mason as Mr. Jordan. It was nominated for nine Oscars, winning just one.

THE WOMAN IN GREEN (January 2, 6:15 am): When a series of murders takes place in London with the victims all missing their right forefingers, it sounds like a case for Sherlock Holmes. And that’s exactly what it is, as Homes and Watson delve into the shadowy worlds of hypnotism and blackmail. This “B” from Universal doesn’t slow down for a minute as Holmes, impeccably played by Basil Rathbone, takes on his greatest adversary in the person off the great Henry Daniell. An enjoyably time for the viewer.

TAXI (January 6, 6:45 pm): Cagney is great as a hotheaded hack fighting a syndicate that seeks to control independent taxi owners. Loretta Young co-stars as his girlfriend (and eventual wife), whose father, Guy Kibbee, owns the company Cagney hacks for. Check out the scene where Cagney and Young enter a dance contest won by George Raft, who gets punched out of Cagney for his troubles. Yeah, it’s hokey, but it’s also riveting to watch. And watch for Cagney speaking Yiddish in the opening scenes.

ED: C. San Quentin is an entertaining programmer with strong performances by Bogie, Ann Sheridan, Pat O’Brien, and especially Barton MacLane. However, it is a programmer, churned out quickly and totally formula. Bogie is the hot-headed, rebellious convict whose older sister, Sheridan, is dating the captain of the guards, O’Brien. MacLane is the evil guard who manipulates Bogie into escaping. Directed by studio hack Lloyd Bacon, who turned them out fast and no-frills, this is one of two prison drama releases from Warners that year, both with Sheridan. Entertaining, yes, Memorable, no. In later interviews, even Bogie had trouble remembering he was in it. 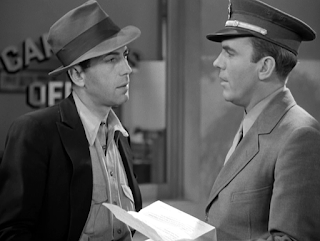 DAVID: B. Released in 1937, during Humphrey Bogart's time at Warner Brothers when the studio had little idea what to do with him, San Quentin is an enjoyable 70-minute crime drama that has Bogie as an inmate at San Quentin trying to go straight. While Pat O'Brien and Ann Sheridan get top billing, it's Bogart as Sheridan's kid brother who shines the brightest. He's also in the most scenes. O'Brien is the new captain of the guards who falls for Sheridan, a nightclub singer. Because of her brother's experiences with law enforcement, Sheridan isn't a fan of prison guards so O'Brien keeps that a secret from her until she find out, leading to a falling out between the two. Meanwhile, O'Brien is giving special treatment to Bogart, primarily because he sees some good in him and believes he can be rehabilitated. But the other inmates, particularly those who have been in San Quentin for a lot longer, say it's because O'Brien is dating Bogart's sister. The film moves along at a brisk pace, well directed by Lloyd Bacon – Ed has mentioned Bacon numerous times over the years, but I believe this is the first time he refers to him as a "studio hack." Ed even pays tribute to Bacon in this article. The best scene is at the end after Bogie escapes, but makes it back to San Quentin – the film was shot on location at the prison – to show O'Brien that he was truly rehabilitated.

For the complete list of films on the TCM TiVo Alert, click here.
Posted by Celluloid club at 12:30 AM