The Starship Avalon, owned by the Homestead Corporation, is on its 120-year course for the Homestead Colony – an Earth-like planet on the other side of the galaxy – with 5,259 people in stasis pods. The ship looks remarkably like a piece of the double helix of DNA attached to a hypodermic needle that emits a force field umbrella from its tip. This is not its maiden voyage. It’s been there and back before. And yet, in the vast emptiness of space, this time it encounters an asteroid field and the audience sees one particularly large rock heading straight for the ship.

We hear the computer send out a warning of “Imminent Collision” in red letters, but no one is awake to act on it. Apparently, evasive maneuvers were not programmed into it. The rock hits the force field and breaks up, the Avalon is shaken and various computer screens light up red. One by one they turn green as the computer makes repairs, all except one.

Jim Preston (Pratt), a skilled mechanic, is awakened from his 120-year sleep with 90 years left for the journey. There is no way to repair his pod, and even if there were, it is not equipped to put him back into stasis. A 3D hologram of a stewardess directs him about as if the ship were arriving at its destination. He’s baffled and after a year of reading manuals and trying to get onto the bridge of the Avalon and failing, he decides to upgrade his meager cabin to first class by forcing his way in. All about him, things flicker on and off and cleaner robots malfunction one by one. His only company is Arthur (Sheen), an android bartender, who is human enough from the waist up. 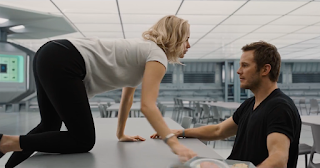 Jim falls in love with Aurora Lane (Lawrence), a writer, still safely in her stasis pod. He wrestles with his conscience and discusses it with Arthur, but decides to read another manual, short out her pod, and awaken her. After swearing Arthur to secrecy about his tinkering, he courts Aurora and they become a loving couple, even to the point of doing the nasty on the breakfast table. Things are still misfiring and malfunctioning around them, but they’re having a high old time anyway. Until Arthur malfunctions and reveals Jim’s secret to Aurora. Now she hates him for “taking her life away.”

It’s not until the breakfast machine spews gallons of wet cereal on Aurora and she nearly drowns in the pool when the gravity suddenly switches off that she realizes that she and Jim need each other. And then another pod malfunctions and Gus Mancuso (Fishburne), a part of the crew is awakened. Now they have access to the bridge, but all systems look OK from there. Gus however, is not OK. He’s coughing up blood. A short session in the AutoDoc machine and they learn that he has hours left to live. It’s Laurence Fishburne’s shortest time on screen, almost a cameo. But before he dies he tells them, “Search the ship. Look for something broken, something big.”

The audience cannot help but laugh, knowing the immense size of the Avalon. The Grand Concourse alone looks like Foxwoods’ shopping area if it was designed by the crew of Lost in Space. If it weren’t so comical, Passengers might have been a romantic space love story. But the love scenes are clumsy.

Forget the science accuracy. Gus’ opening line is “Who the hell planted a tree on my ship?” Jim somehow opened a hole in the floor of the Grand Concourse and planted a small, obviously artificial, oak tree to impress Aurora. (You can see the wires in the leaves as she admires it.) The zero gravity pool scene has a major problem. Most of the water in the pool forms a huge globule, as water would do in zero gravity, but another part of the pool water forms a breaker wave that slaps Aurora down when she swims to the surface. Not possible.

Come Oscar time, Passengers will probably be nominated for set design (they are fabulous) and perhaps for costume design (Jennifer’s bathing suit is a point for that), but very little else. My favorite quote was from Arthur, “I was laughing at the man not wearing pants, then I realized, I have no legs.” And speaking of cameo appearances, we only see Captain Norris (Garcia) briefly at the end. The film is entertaining and almost believable in parts, but too close to comedy to be taken seriously.

French and Japanese cuisines have been melting together for a while now, using ingredients from one and presentations from the other, but this is the first time I’ve found a restaurant where the name is both French and Japanese. 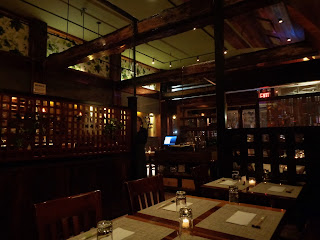 Surprisingly, at 7:00 pm on a Friday, this restaurant had only two of its 12 tables occupied. Walking around the block before entering I noticed many other Japanese-style places on the same block doing lively businesses, and it made me wonder. My smiling and highly informative server, Kazuya, explained that the restaurant has only been open for a little less than a year, and their first Kyo-Ya was already well known. Hence, the Autre, which means “other” in French. He loosely translated Kyo-Ya as a place for people, music and enjoyment.

Asked if I wanted a drink, I remembered our location was on Stuyvesant Street and chose the Stuyvesant Cocktail: Laphroaig 10-year single malt scotch, fernet branca (a type of amaro, a bitter tasting Italian spirit), and yukari powder (dried and pulverized red shiso flakes, an herb in the mint family) and garnished with a large shiso leaf. It was an interesting flavor, as I’ve never had Laphroaig mixed with anything else. However, the resulting taste was smoky, slightly bitter, but pleasant.

Kazuya walked me through the menu and helped me select three courses and a side dish. When he returned I selected the 2013 Vinium Cellars Chenin Blanc from Clarksburg, California. It was another impressive wine from a screw-top bottle. The crispness of this white wine went well with all my courses.

My first course was a signature dish for Kyo-Ya: sea urchin consommé gelée – onsen style (slow-cooked at low temperature) egg, citrus aroma, and parsnip purée. The sea urchin flesh was on the surface of the parsnip purée in five points, topped with edible flowers. Below the creamy parsnip was the gelled urchin. I’ve had sea urchin before and I love the sweet-briny flavor of them. 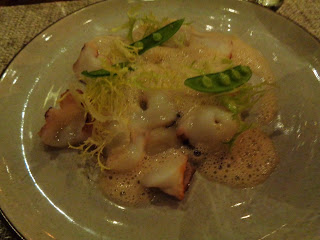 Next, the house smoked octopus – sliced charcoal grilled octopus, celery root puree, and smoked soy sauce. It was beautifully white and pink with bright green pea pods on top and beyond tender and moist. The sauce formed a foam around the pieces of octopus, increasing the attractiveness of the dish.

I originally wanted the branzino, but Kazuya told me it was a dish for two people, a whole fish. I selected the roasted Australian lamb instead, with basil chili, fingerling potatoes, seared nasu eggplant (a long, narrow Japanese variety) and halved Brussels sprouts. The lamb was perfectly cooked to my specifications, juicy, tender, and medium rare. The eggplant was a novel flavor – a little spicier than more common eggplant. The basil chili added an unexpected zip to the meal. The side dish, roasted beets with yoghurt and pistachio, was a cooling effect after the chili.


My dessert was quintessential Japanese: the Azuki Yokan: a little, flourless red-bean jelly cake topped with gold leaf and swirled round by a sweet green tea sauce. This was a light finish to a diverse dinner. Normally, I would have tea after a Japanese meal but this time I asked Kazuya for his favorite sake. He pointed it out on the impressive list and I ordered it. I could taste the plums in this wonderful sake. I thanked Kazuya for widening my knowledge of sake and his meticulous help throughout my dinner.

For the Dinner and a Movie archive, click here.
Posted by Celluloid club at 12:30 AM