“Children don’t come from you, they go through you.” “You don’t need her permission to be her father.” “You’re losing someone? Don’t forget to notice the collateral beauty.”

This multi-moralistic movie starts slow and plodding with Howard Inlet (Smith) being introduced at a corporate meeting by his best friend and partner, Whit Yardsham (Norton). He asks the assemblage what their “why” is. Why did they come to the meeting (aside from being fired if they didn’t)? Then he goes on to discuss the three constants: love, time and death. Yeah, yeah, and so on and so on. A good corporate speech. 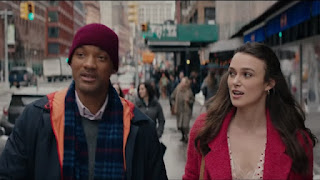 Then, as the plot progresses, we learn that he lost his six-year-old daughter to a rare form of brain cancer. Howard clams up, discontinues his charismatic leadership and spends all of his office time setting up elaborate strings of multicolored dominoes and knocking them down. He’s completely withdrawn and the company is floundering, about to lose a mega-million-dollar contract. Whit and Howard’s two closest compatriots, Claire Wilson (Winslet) and Simon Scott (Peῆa), are at a loss as to how to get Howard back on track. A private investigator, Sally Price (Dowd) reveals he’s now writing letters to the Universe, addressed to his constants, love, time and death.

At an audition campaign, Whit meets a young actress, Aimee Moore (Knightly) who impresses him with her reversal of a tag line to “Shed your skin and find your life.” He follows her to a small repertory theater where she and her two fellow actors, Brigitte (Mirren) and Raffi (Latimore), are rehearsing a play. An idea is born. Whit, Claire and Simon contract the three actors to play parts in the most outrageous intervention of all time. They are to represent the personifications of the three constants and answer Howard’s letters. Brigitte will play death, Raffi time, and Aimee love. The scam is carefully worked out to appear as if nobody can see them if they don’t want to be seen and they are digitally removed from the video taken by the private investigator. All it will cost them is $20,000 apiece.

As the plan is set in motion, the film picks up the tempo as one by one, the actors interact with Howard, while at the same time becoming closer with their respective “coaches” – Brigitte with Scott, Aimee with Whit and Raffi with Claire. A double bonus is achieved as Howard’s problem is being solved for each. Whit’s daughter blames him for his divorce with her mom, Simon hasn’t told his family that his cancer has reappeared and is fatal, and Claire has always wanted children but never succeeded.

Aside from the slow start, Collateral Beauty is an excellent film. Will Smith will make you cry as he struggles with his internal fears. Helen Mirren is fabulous as the consummate actor playing a consummate actor. And the twist at the end involving the leader of an encounter group for people who have lost someone to death, Madeleine is played tenderly and capably by Naomie Harris. I enjoyed Collateral Beauty despite the fact that the trailers led me to believe that death, time and love actually visited Howard. It would have been more spiritual, but wouldn’t have worked out in the long run. This movie is a must see.

Jue Lan Club bills themselves as serving “Chinese food for people who do not like Chinese food.” That would be a turn-off for me if I had seen it before dining there. 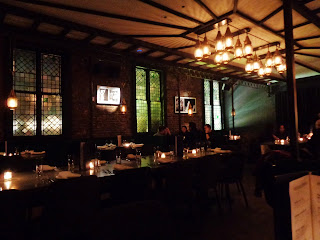 Pronounced “U” Lan, the restaurant name means “determination to create change” and hails back to a club founded by avant-garde artists in the early 1930s in Paris. The entrance is a lit, white enclosed awning leading to twin red doors. Inside it’s dimly lit; votive candles flicker on all the bare wood tables and the semi-circular, green velvet banquettes surround the tables conspiratorially. There are several rooms and I was led to the first table in one of them. The brick wall on one side featured three stained glass windows and the wall to my back was papered with a burnished gold Asian design.

I found the food menu and the wine list already on the table and as I perused both I asked my server, Geo, if there was a separate cocktail list. There was. I told him I was in the mood for adventure and asked for the most unusual drink. He suggested the Lady Dragon cocktail – Grey Goose vodka, fresh lemon juice, and rosemary-infused agave. The main flavor was lemon but in the background were the rosemary and the slight sting of the vodka. A good drink.

While I was thus engaged with the menus another server brought an amuse-bouche, a crisp little bishop’s cap filled with crab meat in an orange sauce. Very nice. Geo asked if I had decided on an appetizer and I gave him the two first courses to put in.

I ordered my entrée and wine. They were out of the one I ordered, but Geo brought me a 2013 Albert Boxler “Reserve” Pinot Blanc from Alsace. A lovely wine with the crispness I wanted, it was chilled perfectly and had a slight acid tang with a beautiful golden color. 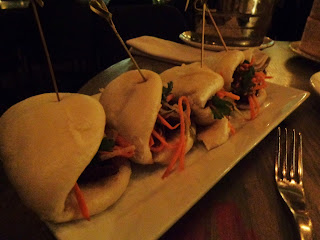 It went perfectly with the short rib Bao buns wrapped around chunks of short rib with jalapeno, pickled cucumber and shredded carrots. The second course, crab and pork soup dumplings with beef broth, arrived almost simultaneously with the buns, but they were in a bamboo steamer and would stay hot longer than the exposed Baos. I finished the Bao buns first as they were rapidly getting cold. I love the texture of Chinese buns, a spongy, almost bread-like quality. The jalapeno was just there for an accent and did not mar the savory short rib flavor.

The soup dumplings did indeed remain hot in their steamer and weren’t there too long before I started eating them. They came with a soy dipping sauce, but didn’t need it. The crab and pork ground together made a good, tasty combination. But where was the beef broth?

I chose the main course for its description. The green prawns with Chinese water spinach, chili, red peppers and cashews did, remarkably, have bright green prawns. How did they get them that vivid color? They were tender with a slight crunch and a spicy aftertaste, which the wine accentuated magically. The entire dish was a marvel and changed my mind about prawns. I had always thought of them as an “Eh!” seafood, not too special. These were special. It was served with a bowl of sticky white rice, just as one would expect in a regular Chinese restaurant.


You will never find a dessert called infamous chocolate mousse – dark chocolate, mirror glaze, red berry compote, flourless sponge and green tea gelato – on any menu in Chinatown, much less anything chocolate at all. But this was a lovely dessert, simple, yet decadent and just the right size. If anything, it was more French than Chinese. The Earl Grey tea I ordered to go with it clinched the non-Chinese atmosphere. Then it hit me. None of the servers were Asian and neither were the patrons. I guess the motto got around. I’m almost glad I didn’t order the Peking duck. Still, Jue Lan Club is a charming bistro with comfortable seating, romantic lighting and good food and wine. It just isn’t Chinese.

For the Dinner and a Movie archive, click here.
Posted by Celluloid club at 12:30 AM