I LOVE YOU AGAIN (December 23, 4:00 pm): Cinema's greatest couple, William Powell and Myrna Loy, are reunited in this 1940 film with W.S. Van Dyke, who directed them in the 1934 classic, The Thin Man. When you have Powell and Loy working together, the chemistry is magic. It's a fun film to watch with Powell showing great range, playing the same character two completely different ways. Before a head injury that reverts Powell's character back to his old self as a conman, he promised to take a group of Boy Rangers on trip into the woods to learn about deer-tracking techniques. He has no idea what to do so he makes stuff up. He ends up falling into holes, getting caught in traps and is completely lost. It's Powell's best physical-comedy role that I've seen. And Myrna, what can you possibly write to capture her beauty and talent? Well, you could write a book. But I'll leave it as she is wonderful and delightful in this movie with her character evolving with the changes in Powell's character.

BEN-HUR (December 25, 1:00 pm): It's nearly four hours long, but it's one of cinema's most spectacular epics. Charlton Heston is masterful as Judah Ben-Hur, a Jewish prince who ends up getting in a lot of trouble when reunited with an old friend, who happens to be a Roman tribune with a real mean streak. The incredible chariot race is reason enough to watch Ben-Hur. It's one of the most spectacular scenes you'll ever seen in film. Add to that, Ben-Hur's time as a galley slave on a Roman boat and the preparation he does to exact revenge and you have an epic film in every way possible.

CHRISTMAS IN CONNECTICUT (December 24, 8:00 pm): Barbara Stanwyck was one of the very, very few that could go from playing in tear jerkers (Stella Dallas) to corporate dramas (Executive Suite) to steamy crime dramas (Double Indemnity) to Westerns (The Maverick Queen) to screwball comedies (The Lady Eve) and distinguish herself in each genre. And this gentle romantic comedy is no different. Here she plays Elizabeth Lane, a Martha Stewart type, a columnist for “Smart Housekeeping,” and a woman touted as “the greatest cook in the country,” with a perfect home in the ‘burbs, a perfect husband, and a perfect baby. She’s the role model to millions of readers. The only problem is that Elizabeth Lane is none of the above. She’s unmarried, no child, lives in the city, and the closest she’s even been to a stove is how near she sits to the restaurant’s kitchen. Trouble ensues when a war hero (Dennis Morgan), as part of a publicity stunt for her magazine, is granted a visit to her “farm.” And, to make things worse, her boss, played by Sydney Greenstreet, is coming along. How can she pull of this charade and not get fired? Stanwyck pulls it off beautifully, giving yet another top-notch performance as the harried columnist. Morgan is excellent as the visiting war hero, and it’s nice to see Sydney Greenstreet in a role other than as the bad guy. He acquits himself rather nicely here. This is the perfect film for those who want to see light holiday fare during this time, and a perfect film for those that have not yet had the pleasure of sampling Stanwyck’s work in comedies.

SULLIVAN’S TRAVELS (December 25, 10:00 pm): This film is rightly said to be writer/director Preston Sturges’s masterpiece. John L. Sullivan is a noted director of light musical fare such as Ants in Your Plants of 1939 and Hey, Hey in the Hayloft. However, he wants to make an Important Film, and he has one in mind, namely O Brother, Where Art Thou, a leaden novel concerned with the struggle between Capital and Labor. The studio execs pooh-pooh it, noting that he grew up rich and never suffered. So, Sullivan sets out to see how the other half lives, and ends up with far more than he bargained for when everybody assumes he died. It’s both hilarious and touching with many insights from Sturges into the human ego versus the human condition. It’s best to record it to be seen again later – and you will definitely want to see it again.

ED: B. I love the writings of Richard Matheson, and his works are some of the very few sci-fi writings I’ve read over the years, as I’m not exactly a big fan of sci-fi. For the very few of those out there reading this who aren’t aware, The Omega Man was the second attempt at filming Matheson’s wonderful novel, I Am Legend. Having read the novel I was never happy with any of the film adaptations, but I rate the original Italo-American production, The Last Man on Earth, with Vincent Price as the best, as it stuck mainly to Matheson’s original. This film was produced by Charlton Heston and has its strengths and failings. One of its greatest strengths was casting Rosalind Cash in the female lead role. She delivered the best performance of the film in her breakout role. I wasn’t all that keen with the writers changing matters of plot that I admired from the book and which were left unchanged in the Price original, but I could live with it given the trend of the times in sci-fi movies: that of dystopia. No, the biggest failing of the film was in Heston the producer casting Heston the actor in the leading role. Heston the actor believes that what he must bring to the film is the uncanny ability to chew scenery. Hells Bells, he could’ve hired William Shatner and gotten the same result – and Shatner’s more charismatic to boot. No, the film would have worked much better without Chuckie Baby in the lead and that’s why I didn’t give it an “A.” 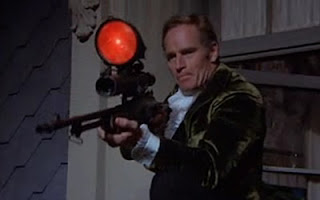 DAVID: A. I'm a sucker for late 1960s-early 1970s post-apocalyptic/dystopian films. If they star Charlton Heston, such as Soylent Green or Planet of the Apes, I'm an even bigger sucker. I love the cool intensity he brings to his characters in these films. Some say he's one of cinema's biggest overactors and I've been teased about being a Heston fan by Ed and our late mutual friend, Bill Kunkel. The two are the most knowledgeable cinefiles I've known, and this film has been a topic of discussion. But despite their sentiment, I remain convinced this is a great film and Heston is outstanding in it. In The Omega Man, he is one of society's last remaining human survivors after biological warfare (between the Chinese and Russians) in 1975 wipes out most people and leaves a bunch of crazed albino mutants. A group of them are called The Family, who want to get rid of technology and science; Heston’s character, Robert Neville is a former military scientist. Because they want to eliminate technology and science, which caused the plague, Chuck is on their chopping block. I agree with Ed that Rosalind Cash (who has an amazing afro) as Lisa, the female lead, is one of the movie's greatest strengths. But the film's excellence is based largely on Heston's performance. Heston plays Neville as a brilliant yet lonely man desperate to survive and desperate for human companionship. Among the great scenes are Neville "negotiating" the sale of a car with a corpse at an auto dealership, and watching Woodstock in an empty theater reciting lines from the concert documentary. The film shows Heston's range as a comedian, a survivor and of course, an action hero. And the ending, which is both happy and sad, is memorable. It's a movie I go back to again and again.


For the complete list of films on the TCM TiVo Alert, click here.
Posted by Celluloid club at 12:30 AM